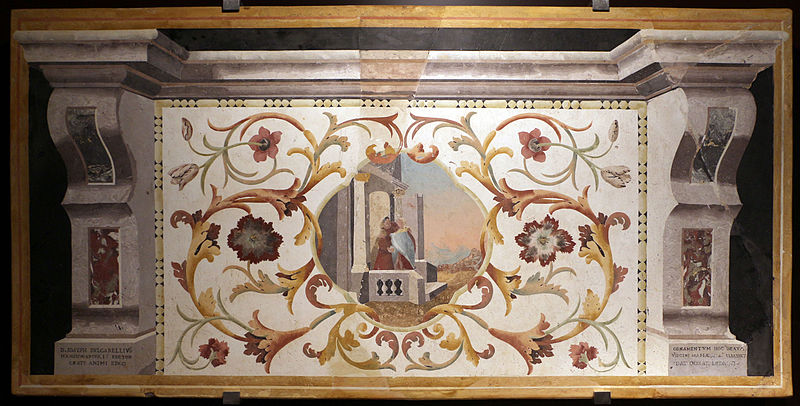 Scagliola is a technique used to produce the appearance of decorative stone. It is created by mixing plaster with glue and dye and is then finished to mimic the appearance of marble or other types of semi-precious stone. The surface of scagliola can be painted or polished to reproduce the desired effect.

The origins of the word come from the Italian term scaglia, which can be translated to mean flakes or chips (as in the flakes or chips of colour used to create the decorative results).

This technique has been used as a form of ornamentation for centuries. There are instances of scagliola in several ancient civilisations, including Egypt (to decorate tombs), Greece (to beautify aqueducts) and India (to adorn dome interiors).

There is also evidence that it was used in ancient Roman architecture, but it wasn’t until the baroque period that it became popular - particularly in Florence. During the 17th century, the technique was used as a more affordable - and easier to instal - method of producing fine architectural elements (such as columns), sculpture, flooring, furniture and other structures that appeared to have marble inlays.

Scagliola became popular in Germany and then spread to the United Kingdom, where one of the earliest installations is in the Queen’s bedchamber at Ham House. As one of the most elegant rooms in the house, the bedroom was decorated for a visit by Catherine of Bragnaza, the wife of Charles II, and includes elaborate scagliola panels around the fireplace and on one of the window ledges.

This particular example is made from selenite, which is a form of gypsum that has been made to look like marble. It was most likely imported from northern Italy.

The installation of scagliola was also part of a 19th century renovation to the interiors of Buckingham Palace. The baroque technique is seen in the widespread use of brightly coloured scagliola and blue and pink lapis.

After this period, scagliola fell out of fashion in England, but it remained popular in Ireland and spread throughout the United States in the 19th and 20th centuries. American scagliola is sometimes referred to as marezzo.

There are two types of scagliola - traditional and marezzo - which require different methods of production.

The classic scagliola faux marble technique uses pieces of pigment, water and plaster mixed into a paste like texture and placed on a flat stone surface. Glue can be added to the water to harden the plaster. This is then sprinkled with dry, veining colourant of plaster and stone dust. These components are mixed and cut to produce the veining effect.

The final product is placed into a form and cut into pieces that can be attached and then beaten into the surface of walls or columns. The finished surface is then scraped and sanded. In a technique referred to as ‘stopping’, additional scagliola material is used to fill any holes that exist. This action may be repeated several times.

The surface is then finished and polished.

As a newer form of scagliola, the marezzo technique produces a smoother result than the traditional technique. It uses silk threads that have been soaked in coloured dyes. These threads are then put on top of a sheet of glass, which is then covered with wet, pigmented plaster. The threads are dragged through the plaster to create the veining effect that looks like the veins in marble.

When the plaster reaches a semi-set state, it is installed on the desired surface. The finished surface is then polished.

There is a different technique for making scagliola inlays. This involves using a liquid form of the mixture and placing it into engravings that have been made into a piece stone. Details can be built up in several stages of carving and filling.

Once the mixture dries, it is rubbed until it is smooth. The surface is then polished.

In each instance, the smooth surface of the scagliola is finished with water and pumice. It is then polished and sealed with wax, oil, lacquers and stone.

While scagliola mimics the appearance of marble, malachite or other precious stone, it can be distinguished by its surface temperature. It will feel warmer than natural stone and will sound more resonant (or hollow) when struck.

Scagliola should only be maintained and repaired by knowledgeable personnel.

Common forms of damage can include:

Retrieved from "https://www.designingbuildings.co.uk/wiki/Scagliola"
Create an article