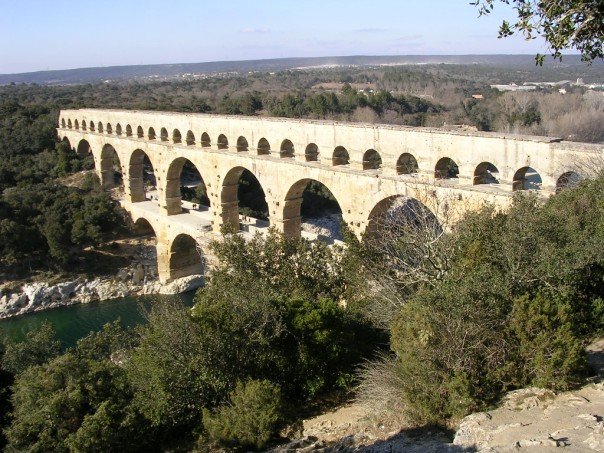 An aqueduct is a channel that has been constructed for the specific purpose of carrying water from one point to another. The source and distribution point may be a significant distance apart, and the water is often transported over an elevated masonry or brick structure - often in the form of a bridge - supported on arches. It can also be carried through a series of tunnels or other underground systems.

Before being adopted by engineers of the Roman empire, this ancient water delivery system had already appeared on a small scale in many different parts of the world including Greece, Egypt, Jordan, Persia, Oman, India and the Americas. These aqueducts were primarily used to supply irrigation systems for farming purposes, but the waterways also provided bathing and drinking water to some parts of the population.

With the rise of the Roman empire, cities expanded rapidly, triggering a need for suitable infrastructure to support the population. This included the reliable delivery of water.

Some of the earliest Roman aqueducts date back to the fourth century BC. The first of these structures, the Aqua Appia, was used to supply water from approximately 10 miles outside of the city. This aqueduct was mostly underground until it reached the edge of the city. At this point, it emptied into a series of reservoirs that distributed water to different parts of the city.

The need for fresh water drove the construction of complex aqueducts. These used the basic properties of gravity and the construction of a series of channels that gradually declined over significant distances (sometimes of 50 miles or more). A steeper gradient allows a smaller channel to carry the same amount of water as a larger channel with a lower gradient, but it must start from a higher point to reach the same distance.

As the empire grew, so did the sophisticated network of aqueducts along with the construction, maintenance and inspection practices that protected them. Many aqueducts included purification systems in the form of sedimentation tanks. Distribution tanks would control the flow of the water to different locations.

The Roman network of aqueducts became an essential part of the empire’s urban planning initiatives.

In Segovia, Spain, the Aqueduct of Segovia is a testament to the importance of good construction and maintenance. At one time the Romans employed more than 700 people just to maintain their aqueduct network.

In France, the Pont du Gard, near Nimes, survives as an example of Roman engineering skill. Each large arch spans approximately 25 metres (82 feet) and is constructed of un-cemented blocks weighing nearly two tons. The small top arches, which carry the channel, were placed in groups of three over the larger arches below.

The remains of other ancient aqueducts still stand in many Roman cities, both in Italy and other parts of the former empire. Some have been maintained and are still partially in use, although most fell into disrepair, and some were intentionally destroyed by the enemies of Rome as a tactical measure.

During the Renaissance, architects and others were inspired by the aqueducts that survived, and in medieval times, the gravity-based system was used on a smaller scale to drive water wheels.

[edit] How aqueducts are used in modern times

Modern aqueducts are both overground and underground structures. They can be constructed from pipes, ditches, canals, tunnels and other engineered systems.

Complex aqueduct systems of this type have been used to transport water in California, Arizona, New York State and other places throughout the United States. An aqueduct system in China (the South-North Water Transfer Project) will eventually direct water from the Yangtze River to Beijing.

[edit] Aqueducts of the world

The following list provides an overview of some of the dates and locations of noteworthy aqueducts around the world.

Retrieved from "https://www.designingbuildings.co.uk/wiki/Aqueduct"
Create an article