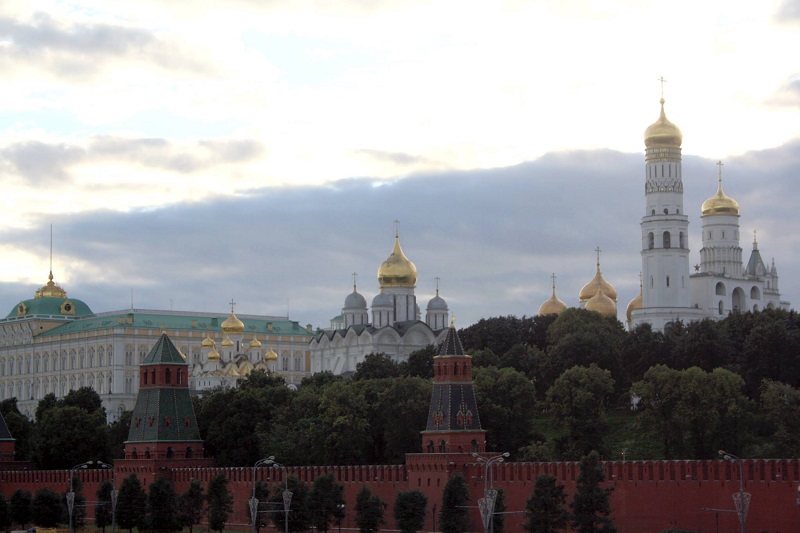 The Kremlin – meaning ‘a fortress inside a city’ – is a fortified complex in the centre of Moscow, on the western side of Red Square. It has played a major role in Russian history over the centuries, and is a powerful symbol of the nation’s authority and power. It served as the focal point for Soviet power during the 20th century and, since 1991, has been the official residence of the President of the Russian Federation.

The Kremlin’s walls enclose an assemblage of some striking and unique Russian architecture – five palaces, four cathedrals and the Kremlin towers. Most of these are open to the public and are among Russia’s most popular tourist attractions.

In 1991, the Kremlin was designated a specially protected cultural property of Russia, the highest conservation status in Russian legislation.

It is believed that the site of the Kremlin was inhabited as far back as 500 BC, although the city of Moscow only dates back to around 1147. This is the point at which a wooden fort was constructed on the site by Yuri Dolgoruky. Despite being razed by the invading Mongols in 1208, the city continued to grow and was acknowledged by the Russian Orthodox Church in 1326. It was around this time that the first stone buildings were built in the Kremlin, before being fortified with stone walls at the end of the 15th century.

The Kremlin became the centre of a unified Russian state under the reign of Ivan the Great (1462-1505), and was extensively remodelled during that time. 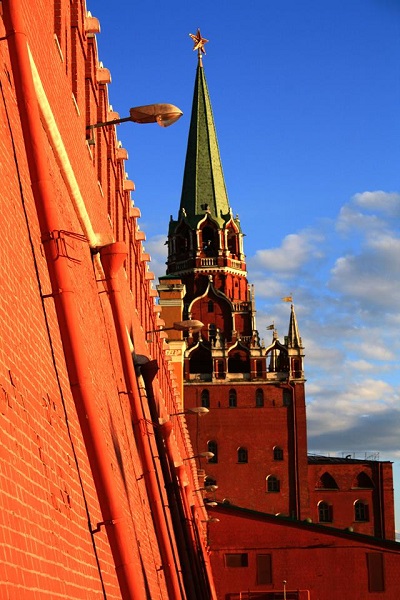 The crenellated red brick walls, along with 20 towers, were constructed at the end of the 15th century by Italian master-builders invited to Moscow by Ivan the Great.

Most of the main towers were designed by Pietro Solario, including the Spasskaya (Saviour) tower, topped with its iconic red star and black-and-gold clockfaces.

Eighteen towers were constructed originally, but two more were added in the 17th century. At 80 m, the tallest tower is the Troizkaya (Trinity) gate house which was constructed in 1495. All but three of the towers are square in plan. They were all originally crowned with timber tents, but these were replaced with brick-and-coloured-tile arrangements in the 1680s. 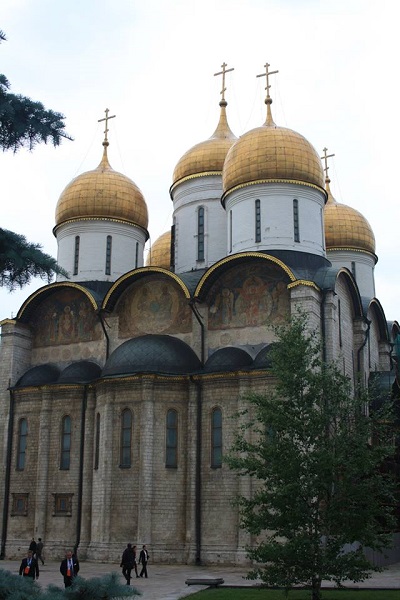 At the heart of the Kremlin complex is Cathedral Square. Around this are grouped three cathedrals that are seen as exemplary forms of Russian ecclesiastical architecture from the late 15th and early 16th centuries. During the reign of the Soviet Union from 1917 to 1991, the churches were not used as places of worship, although most have resumed services after the Soviet collapse.

The oldest building is the Cathedral of the Assumption (1475-79), also known as Dormition Cathedral, built of white stone in the Italianate-Byzantine style. It is characterised by its simply proportioned lines and elegant arches which are crowned by five apses and five golden domes typical of Russian architecture. Instead of using the more common cantilever vaults, the architect Aristotele Fioravanti opted for groin vaults and transverse arches. The use of specially-made larger bricks helped to reduce the upper building weight and allowed for more slender arch supports.

At the other side of the square is the Cathedral of the Annunciation (1484-1489), which was burned down in 1547 and rebuilt in 1562-64, increasing the number of domes from three to nine. The cathedral contains a number of early-15th century religious icons attributed to the legendary Russian painter Andrei Rublev.

The Cathedral of the Archangel Michael is located on the south-east side of the square. Constructed in 1508, it served as the main necropolis of the Russian Tsars until the capital was relocated to St. Petersburg. It is similar to the other cathedrals in terms of its use of gilded domes, however, it is defined by its semi-circular niches with shell-shaped ornaments and gateways with arc-shaped frames. 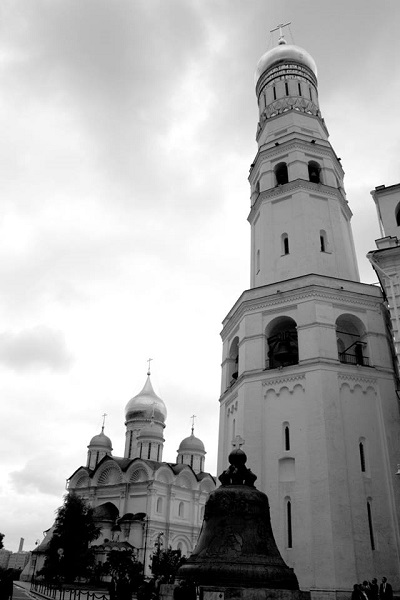 Supposedly marking the exact centre of Moscow, the Ivan the Great Bell Tower is located just off Cathedral Square. It was completed in 1600 and resembles a burning candle. It reaches 81 m (266 ft) tall and the upper section was restored after suffering damage during the Napoleonic invasion in 1812. Due to a height ban that was in place until the 1917 Revolution, the tower was the tallest structure in the city.

Sat on a pedestal at the foot of the tower is the Tsar Bell, never rung but still the largest bell in the world.

One of the oldest surviving structures of the Kremlin is Ivan the Great’s Palace of Facets, built in 1491 to hold the imperial thrones. This palace is characterised by its distinctive façade of sharp-edged white stones in horizontal rows.

The second oldest is located behind this, the Terem Palace which was built in 1635-36. Together with the Palace of Facets, this is linked by the Great Kremlin Palace which was built as a royal residence in 1838-49, with its long, yellow-washed façade that looks out on the riverfront. The Grand Palace is the largest structure in the Kremlin and the most expensive – it cost more than $1 billion to renovate in the 1990s. It contains the lower storey of the Resurrection of Lazarus church which, built in 1393, is the oldest existing structure in Moscow.

A Soviet-period building, built in 1960-61, is the Palace of Congresses, which has a vast auditorium used as a theatre and for political events.

Retrieved from "https://www.designingbuildings.co.uk/wiki/The_Kremlin"
Create an article