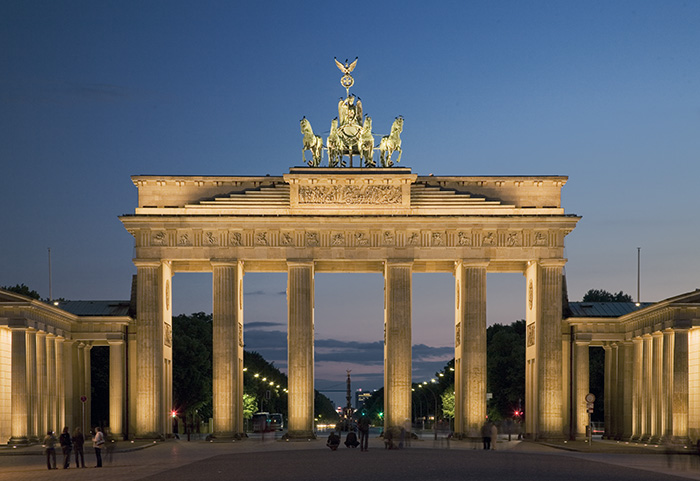 The Brandenburg Gate (Brandenburger Tor) is a neoclassical monument in central Berlin, and is one of Germany’s most famous landmarks.

It is located at the junction of the grand boulevard Unter den Linden and Ebertstraße, adjacent to the Reichstag building. This is the former site of the gate to the old fortified city that marked the start of the road from Berlin to the town of Brandenburg an der Havel.

The new gate was commissioned in 1788 by King Friedrich Wilhelm II of Prussia and designed by the architect Carl Gotthard Langhans. The construction was completed in 1791.

Since its completion, the gate has become a symbol of great significance for Germany, representing the unrest and division during the Cold War-period of Partition, and subsequently as a symbol of unity and peace for the whole of Europe. 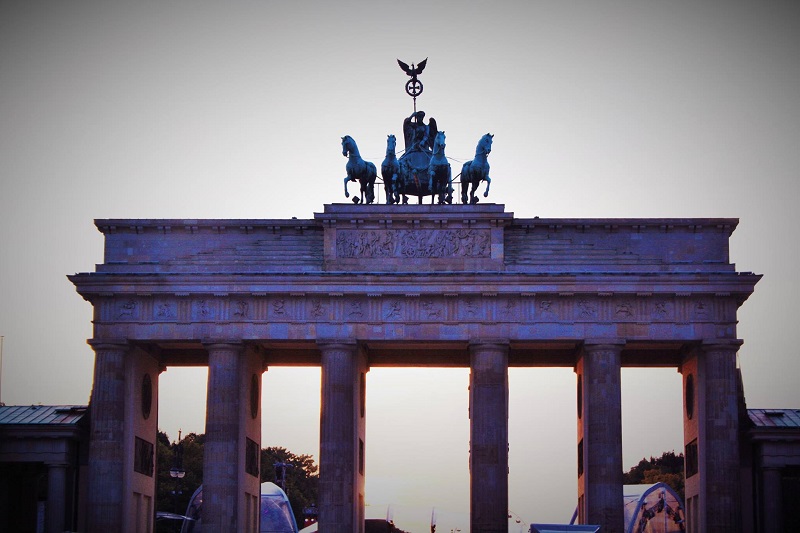 Friedrich Wilhelm II’s original intention for the gate was to use architecture as a means of celebrating victory, influenced by the Ancient Greeks. Langhans based the gate’s design on the Propylaea, the gateway to the Acropolis in Athens.

Built from sandstone, the structure consists of twelve Doric columns, six to each side, which form five passageways.

The central passageway is slightly wider and was intended to be used only by the royal court, whereas the outermost two on each side were intended for ordinary citizens. The width is different because of the status in the hiearchy. The columns at the sides were provided with accommodation for toll collectors, soldiers and guards on-duty.

The gate is decorated with bas-reliefs and sculptures designed by Gottfried Schadow, most of them based on the adventures of the mythological figure Heracles. On top of the gate is a Quadriga, a sculpture of a chariot drawn by four horses, also by Schadow. The goddess riding the chariot is supposed to represent Eirene, the goddess of peace.

The Brandenburg Gate has been at the centre of Germany’s national history since its completion.

The gate’s most notorious moment in history came on January 30th 1933, when Adolf Hitler, having soared to power as Chancellor, led a procession through the gate to the presidential palace.

While much of Berlin was destroyed by the end of World War II, the gate emerged intact but damaged. Only one of the horses’ heads from the original Quadriga survived, and is today kept in the Markisches Museum.

Following Germany’s surrender, the gate was restored in a joint effort by the governments of both East and West Berlin. When the Berlin Wall was built in 1961, the checkpoint at the gate was ‘closed until further notice’, and would remain that way until 22nd December 1989.

In the intervening years, kept inaccessible by sentry guards and barbed wire, the gate stood as a symbol of the division that dominated the country. It became the backdrop to several high profile political events, such as the US President Ronald Reagan’s famous speech in 1987 where he urged the Soviet leader, “Mr. Gorbachev, tear down this wall!”

When the Berlin Wall was demolished in 1989, the gate became a focal point for the Reunification celebrations. Still suffering damage from WWII, the gate was restored between 2000 to 2002 by the Berlin Monument Conservation Foundation.

Retrieved from "https://www.designingbuildings.co.uk/wiki/Brandenburg_Gate"
Create an article