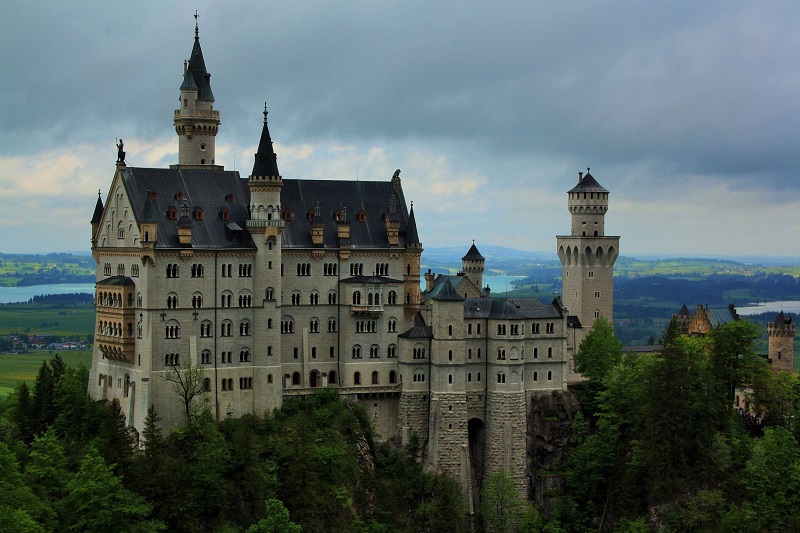 Neuschwanstein Castle, located on a hill in southwest Bavaria, Germany, was commissioned by King Ludwig II of Bavaria as his personal retreat and homage to the composer Richard Wagner. Completed in 1886, the castle was designed in the Romanesque Revival style that became popular in the late-19th century.

Three castles originally overlooked the villages of the Schwangau municipality, dating back to the Middle Ages. Having lived there as a child, King Ludwig, in his desire to construct his fantasy castle, tore down the ruins of the original structures. He commissioned a new building using his own funds, which sent him into debt, and instructed the architect Eduard Riedel to design a castle based on the operas of Wagner and the stage sets of Christian Jank.

With its towers and turrets that appear to have been inflated like a giant bouncy castle, and multiple levels and tessellations that invoke the Grimm Brothers fairy tales, Neuschwanstein is an iconic example of Romanticism and remains a recognisible symbol of Germany.

King Ludwig took a keen personal interest in the design of the castle; however, the construction process was more problematic than had been foreseen, due to its mountain-ridge location.

The design incorporates Romanesque shapes such as bi- and triforia window openings and semi-circular arches, with Byzantine and Gothic influences such as slim towers and upward-pointing lines. The elongate building is characterised by its numerous towers, gables, balconies and turrets.

Construction began in September 1869, after the ruins of the medieval castle were completely demolished, despite original intentions to incorporate them into the new building. The cellar was completed in 1872 and topping out was achieved in 1880.

The castle was built using conventional brick, marble and white limestone mined from a nearby quarry and lifted to the site using a steam crane. With costs escalating to around 6.2 million marks, Ludwig insisted that tight deadlines be met, with up to 300 workers being engaged for periods of night-work with oil lamps.

By the end of 1882, it was mostly complete, save for the keep, and Ludwig began living there to oversee the remaining work.

The interior design features ornately-decorated rooms such as Ludwig's personal suite, a Singer's Hall, and Grotto, based on German legends that had inspired Wagner's operas. Despite originally being designed to include more than 200 rooms, just 15 rooms and halls were ever completed. 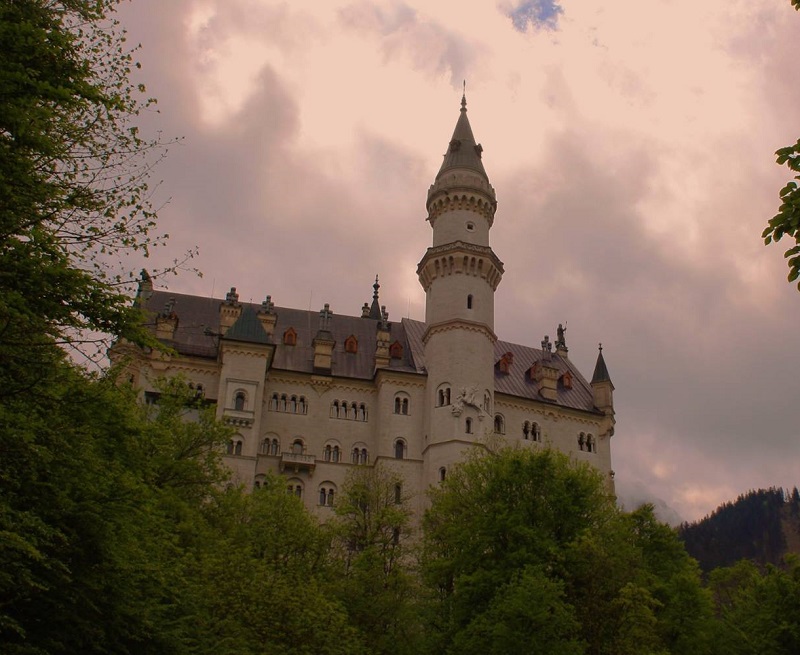 King Ludwig died in 1886, having lived in the castle for only 172 days. With debts piling up, work stopped on the keep and only minor works continued until 1891.

Immediately after Ludwig's death, the authorities decided to open the castle to the public in an attempt to recoup costs. Whilst the building was lambasted as kitsch by the critics of the time, it is now appreciated as a fine example of European historicism and significant for being one of the last big palace-building projects of the 19th century.

The castle was made state property after 1918, when Bavaria became a republic. It is now managed by the Bavarian Palace Department.

Due to its isolated location, it was used by the Nazis during the Second World War as a storage depot for artworks stolen from occupied France. As the war drew to an end, the SS planned to blow up the castle to prevent it falling to the enemy, although this did not in the end happen.

The castle's global fame increased drastically when it was chosen as the model for the Sleeping Beauty Castle for Disneyland which opened in 1955. It also featured in the popular children's film 'Chitty Chitty Bang Bang'. Today, 1.3 million tourists visit the castle every year, making it one of the most popular attractions in Europe.

There is continuous monitoring of movement in the foundations, and the sheer rock walls must be repeatedly secured. The harsh climate of the exposed location has had a detrimental effect on the limestone façades, which will require section-by-section renovation over the next few years.

Retrieved from "https://www.designingbuildings.co.uk/wiki/Neuschwanstein_Castle"
Create an article