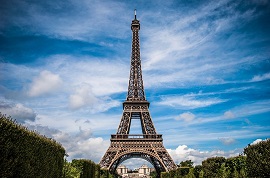 The Eiffel Tower (Tour Eiffel), situated on the Left Bank of the Seine River in Paris, is an iconic symbol of France and one of the most famous buildings in the world.

The tower was designed by Gustave Eiffel for the 1889 Exposition Universelle (World’s Fair), with the intention of commemorating the centenary of the French Revolution. Eiffel was a renowned civil engineer who specialised in iron construction and had previously worked on the structural framework for New York’s Statue of Liberty, which, standing at 320m, became the world’s tallest building upon its completion; a title it would hold until New York’s Chrysler Building was finished in 1930.

However, it faced fierce opposition from critics before and after its completion, including a petition against the “ridiculous tower dominating Paris like a gigantic black smokestack”. The misjudged petition later featured in the defense of the construction of the Centre Pompidou, which faced similar criticism. The tower also narrowly avoiding being dismantled by the French themselves and destroyed by the invading Nazis, but despite these problematic early years, it went on to become one of the most popular monuments in the world, with around 7 million visitors a year to its 3 different platform heights.

Over 100 designs were considered by the French Government for a suitable monument to mark the Exposition Universelle, before they decided on Eiffel’s open-lattice wrought iron design. Eiffel’s idea was for the four supporting pillars to be aligned to the points of the compass.

The tower is built of very pure structural iron which makes it relatively extremely light and means that it moves under high wind loading.

The construction of the tower was a remarkable architectural achievement. 18,038 pieces of iron were fitted together with 2.5 million rivets by around 300 steel workers, completed in just 2 years, 2 months and 5 days. 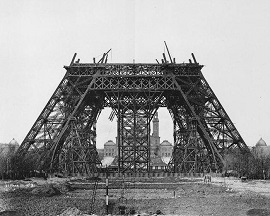 Despite being a tourist success, the Eiffel Tower was originally intended to be a temporary structure. The land on which the tower stood was deemed to be of too high a value to be dominated by the tower and so plans were made to dismantle it. These plans were abandoned when the First World War broke out and the tower was adapted to become a military radio and telegraph centre.

When the Nazi’s faced the end of their occupation of Paris, Hitler gave orders to destroy the tower, along with Notre Dame Cathedral; however, these orders were disobeyed.

Subsequent mismanagement meant that by 1980 the tower was in a poor state of disrepair and required significant and expensive renovation and restoration work, including the installation of new elevators and new paintwork.

With its restaurants and various other exhibits and installations, the Eiffel Tower remains an enduring icon of the built environment as well as of France as a country, with many imitations around the world, most notably in Las Vegas. It is regularly used as the centre-piece for events and it is estimated that 250 million people have visited it since 1889.

[edit] Building of the week series