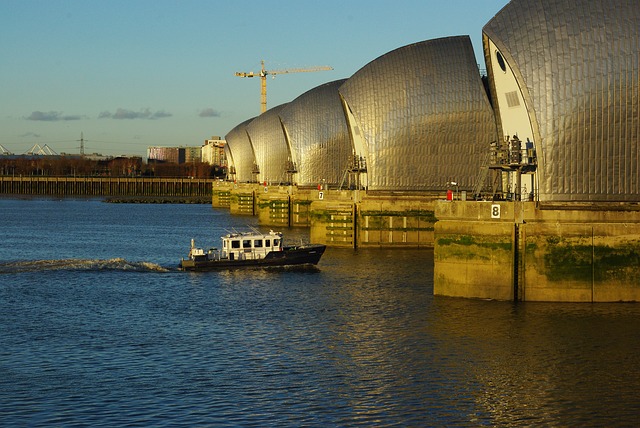 The Thames Barrier is a movable barrier that plays a critical role in preventing the London basin from flooding as a result of high tides and storm surges moving up from the North Sea. It is the world’s second largest flood defence barrier, after the Ooosterscheldekering barrier in the Netherlands.

The barrier spans 520 metres across the Thames from Silvertown on the north bank to New Charlton on the south bank. It is currently run and maintained by the Environment Agency (EA) who oversee decisions to close (raise) the barrier during high tides and open (lower) the barrier to restore the river’s flow.

The initial design estimated that it would need to be closed once every six years on average. Indeed, this prediction was initially relatively accurate, as it was closed a total of four times from 1982, when it became operational, to the end of that decade. However, during a 9-day period in February 2014, the barrier was closed a record-breaking 20 times.

The original design-life of the barrier was intended to be until 2030, but recent reports suggest that even taking into consideration the predicted sea level rise as a result of climate change, the barrier will provide sufficient protection until 2060-70.

Situated on a floodplain, London suffered dramatic flooding a number of times during the 20th century. In 1928, 14 people drowned when the Thames overflowed between the City and Southwark to the east, and Putney and Hammersmith to the west.

In 1953, the North Sea flood resulted in several hundred deaths, forced thousands to evacuate their homes, and caused substantial damage. It was at this point that many began calling for a barrier to protect the capital from future flood events.

The premise for the rotating gates was devised by Charles Draper. The Greater London Council commissioned Rendel, Palmer and Tritton to design and test the barrier. The choice of site was determined by the underlying river chalk having enough strength to support the barrier, as well as the relatively straight banks in the New Charlton area.

Construction began in 1974, and it was officially opened by the Queen on 8 May 1984. The total construction cost was an estimated £534 million with an additional £100 million for other river defences.

[edit] How the barrier works

When open, the gates lie flat on the river floor, the Thames flows freely and ships are able to pass through. When closed, the solid steel gates rotate upwards to block the river and prevent upstream flow. They can also be placed in an underspill position which allows a controlled amount of water to pass beneath the gate and up the Thames.

These enable a forecast of dangerous conditions up to 36 hours in advance. A combination of three factors determines whether or not to close the barrier:

The gates are closed starting with those on the outside, and it takes 75-90 minutes to be fully closed. When the decision to close is made, the barrier is closed just after low tide, which is usually around 4 hours before the incoming surge tide peak will reach it. Closing after low tide creates an empty ‘reservoir’ space for the river flow to fill up. The river water is held back from the estuary until the tide turns, meaning that the gate must remain closed until the water on both sides is ‘equalised’ (downstream water reaches the same level as the upstream water). This process usually takes around 5 hours. 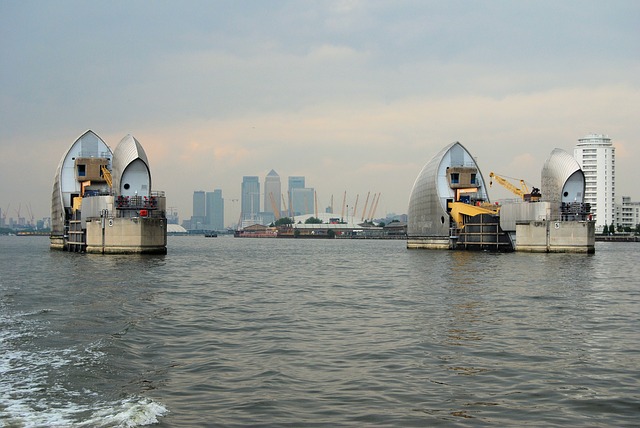 [edit] Future of the barrier

By April 2015, the EA had closed the Thames Barrier 175 times since 1982. 88 of these occasions were to protect against tidal flooding, and 87 were to alleviate river flooding. The use of the barrier has been increasing in recent years, which has prompted concerns that climate change causing more storm events and rising sea levels could mean that the barrier has to be redesigned.

In response to concerns about tidal flooding, the EA developed the Thames Estuary 2100 Plan, which examines risks and preventable action for short, medium and long-term scenarios. Although based on current climate change predictions, the Plan is designed to be adaptable as predictions are amended over the years.

However, when the barrier was originally designed, it was thought that the sea level would rise by around 8mm per year, whereas it is currently rising at around 3mm per year, and so it is thought that, with proper maintenance, the barrier could continue to be operational until around 2060-70.

There have been calls for a new barrier to be planned further downstream before this point is reached, and several designs have already been proposed.

Retrieved from "https://www.designingbuildings.co.uk/wiki/Thames_barrier"
Create an article