Tidal Lagoon (Cardiff) Ltd is a special purpose vehicle established for the development of this project by Tidal Lagoon Power, the company behind the Swansea Bay tidal lagoon.

90 turbines will give the electricity generating station a potential capacity of 1,800 MW to 2,800 MW. This is equivalent to an installed capacity and an annual output of 4 TWh and 6 TWh, enough to power all Welsh homes with predictable, renewable energy for 120 years.

It is thought that a planning application will be submitted in 2017, and that power generation could being in 2022.

Tidal Lagoon (Cardiff) Ltd said “The Severn Estuary holds the second highest tidal range in the world and within this a tidal lagoon between Cardiff and Newport would benefit from a tidal range of around 9m, which makes it ideal for sustainable, long-term electricity generation. It would also bring a range of opportunities to the area, from employment and skills to education and leisure, bringing continued regeneration to South Wales and the Severn Estuary.”

Tidal Lagoon Power are also considering lagoons at Newport, West Cumbria, Colwyn Bay and Bridgwater Bay. Together they believe this could provide 8% of the UK’s electricity.

The UK has some of the highest tidal ranges in the world in areas of shallow water around a number of its coastal areas. These places present an opportunity to create artificial lagoons by constructing perimeter breakwater walls to enclose a tidal area. The tidal area is then dredged and two way hydro turbines installed through which estuarine water flows in one direction or the other four times daily. For fifteen out of twenty four hours there is enough tidal flow to operate the turbines and generate electrical power. Tidal lagoons are considered to have a relatively low environmental impact as they delay, rather than prevent high and low tides.

In February 2016, the government announced it was commissioning an independent review into the Swansea Bay tidal lagoon - which was seen as a precursor to the Cardiff proposals. Energy minister Lord Bourne said: “I want to better understand whether tidal lagoons can be cost effective, and what their impact on bills will be – both today and in the longer term. This review will help give us that clarity so we can determine what role tidal lagoons could have as part of our plans to provide secure, clean and affordable energy for families and businesses across the country.” However no completion date was given for the review and it was seen by some as a way of avoiding having to make a difficult decision.

In May 2016, it was announced that the review would be carried out by Conservative MP and former energy minister, Charles Hendry.

The review was published in December 2016. Hendry said; “I believe that the evidence is clear that tidal lagoons can play a cost effective role in the UK’s energy mix and there is considerable value in a small (less than 500 MW) pathfinder project. I conclude that tidal lagoons would help deliver security of supply; they would assist in delivering our decarbonisation commitments; and they would bring real and substantial opportunities for the UK supply chain."

In February 2017, 107 MPs signed a letter to Greg Clark calling on him to respond to Hendry Review on tidal lagoons, and in particular the call for a pathfinder project.

In September 2017, the company secured a connection deal with National Grid for 3,240 megawatts. An application for development consent is anticipated in 2019. 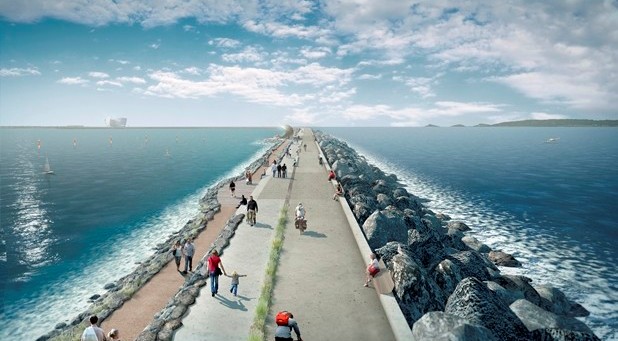 Retrieved from "https://www.designingbuildings.co.uk/wiki/Cardiff_tidal_lagoon"
Create an article