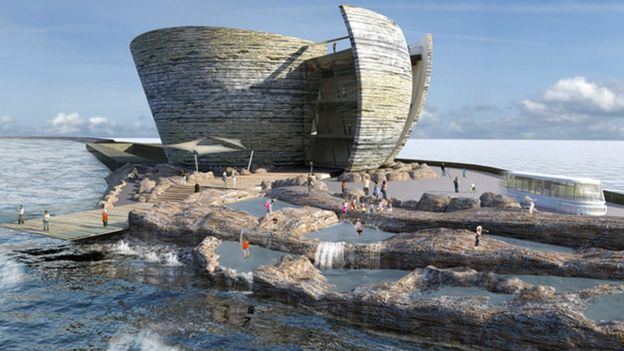 Tidal Lagoon Plc was formed to design and construct a tidal lagoon in Swansea Bay where the tidal range can reach up to 12 m, the second highest in the world.

The company submitted a planning application by means of a Development Consent Order and applying for a marine licence from the Welsh government, then began raising funds and negotiating with land owners and offshore rights owned by the Crown Estates.

The 240 MW scheme was estimated to cost £650 million and designed to have the capability of generating predictable renewable energy for 120,000 homes for 120 years. The centrepiece was to be an educational, cultural and leisure building on the 6-mile tidal lagoon wall.

As tides are more reliable than wind, its energy might be considered a better bet than the rush to erect wind turbines across Britain’s countryside. The Swansea Bay scheme was calculated to save 216,000 tonnes of CO2 annually which is equivalent to taking 81,000 cars off the road. Turbine blades were of a size and speed that allow large fish to freely enter and exit the lagoon without harm. Additionally, the perimeter walls were to provide leisure access for pedestrians and cyclists, with the lagoon attracting dinghy sailing and other activities.

The project was scrapped in June 2018 after the government confirmed they were unwilling to support the scheme.

In the 2015 Budget, Chancellor George Osborne announced that negotiations had been opened to deliver the scheme.

In March 2015, the same company submitted an Environmental Impact Assessment scoping report for a much larger tidal lagoon between Cardiff and Newport. See Cardiff tidal lagoon for more information.

On 9 June 2015, the application for the Tidal Lagoon Swansea Bay proposal was given development consent by the Department for Energy and Climate Change.

However, in October 2015, it was announced that the start date for construction works had been delayed until March 2017 because of difficulties agreeing subsidies with the Government.

In January 2016, Prime Minister David Cameron cast doubt over the project whilst giving evidence to the Parliament’s Liaison Committee, when he said, “The problem with tidal power, simply put, is that at the moment we have not seen any ideas come forward that can hit a strike price in terms of pounds per megawatt-hour that is very attractive. That is the challenge for tidal. Maybe they can come up with something. They are very long-term schemes with big investments up front, and they can last for many, many years, but right now my enthusiasm is reduced slightly by the fact that the cost would be quite high.”

In February 2016, it was announced that the owners of SIMEC and Liberty House had invested more than £10m to acquire a stake in Tidal Lagoon Plc.

In February 2016, the government announced it was commissioning an independent review into the project. Energy minister Lord Bourne said: “I want to better understand whether tidal lagoons can be cost effective, and what their impact on bills will be – both today and in the longer term. This review will help give us that clarity so we can determine what role tidal lagoons could have as part of our plans to provide secure, clean and affordable energy for families and businesses across the country.”

However, no completion date was given for the review and it was seen by some as a way of avoiding having to make a difficult decision. In May 2016, it was announced that the review would be carried out by Conservative MP and former energy minister, Charles Hendry.

In May 2016, it was announced that Tidal Lagoon had parted company with the proposed Chinese developer and that the project would be re-tendered.

The review was published in December 2016. Hendry said; “I believe that the evidence is clear that tidal lagoons can play a cost effective role in the UK’s energy mix and there is considerable value in a small (less than 500 MW) pathfinder project. I conclude that tidal lagoons would help deliver security of supply; they would assist in delivering our decarbonisation commitments; and they would bring real and substantial opportunities for the UK supply chain."

"If you look at the cost spread out over the entire lifetime - 120 years for the project - it comes out at about 30p per household for the next 30 years. That's less than a pint of milk. That's where I think we can start a new industry and we can do it at an affordable cost to consumers."

He also said that the lagoon would be a "world first" which was different to barrages elsewhere in the world as lagoons do not block the mouth of a river.

"We know it absolutely works," he said. "One of the great advantages is it is completely predictable for all time to come - we know exactly when the spring tides and neap tides are going to be every single day for the rest of time."

Swansea Bay would act as a pathfinder project, allowing people to learn more about the technology and then bring the cost down.

In February 2017, 107 MPs signed a letter to Greg Clark calling on him to respond to Hendry Review on tidal lagoons, and in particular the call for a pathfinder project. Richard Graham MP, chair of the All Party Group for Marine Energy & Tidal Lagoons, said; “Former energy minister Charles Hendry started his review as a sceptic and ended as an enthusiast. He was very clear in urging the government to give the green light for a pathfinder in Swansea – the world’s first ever tidal lagoon – and then see whether the experience justified going ahead with much larger future lagoons.”

A decision had been expected from Prime Minister Theresa May during a visit to Swansea on 20 March 2017, but in the event, not even a date for a decision was announced. May said “I don’t have a timetable at the moment, no, at the moment. We need to ensure we are doing the proper analysis.”

In January 2018, it was reported that the Welsh First Minister, Carwyn Jones, had written to Theresa May offering to cover some of the tidal lagoon’s costs and urging the government to allow the project to go-ahead. (Ref. http://gov.wales/newsroom/firstminister/2018/180110-First-Minister-offers-further-support-to-kick-start-Swansea-Bay-Tidal-Lagoon/?lang=en)

On 1 June 2018, the Financial Times reported that ministers were planning to reject the scheme because of the level of subsidy that it required, which is thought to be much higher than alternative low-carbon schemes.

Following this, on 6 June 2018, the Welsh Government pledged to invest £200m to what was described as an 'eleventh hour bid' to save the scheme amid concerns that Whitehall was preparing to scrap it altogether.

Despite such pledges, on 26 June 2018, it was announced that the project was to be scrapped after the government said it was not willing to support the scheme. After 18 months of analysis, the Business Secretary Greg Clark told the Commons that however novel and appealing the project seemed, it did not demonstrate value for money for consumers and the public.

He referred to figures that suggested a construction value of £1.3bn and a power generated costing £900m more than from offshore wind. The capital cost per unit of electricity per year would, the government said, be three times that of Hinkley Point C. Tidal Lagoon Power refute the government's figures.

Shadow business secretary Rebecca Long-Bailey, said: ”Scrapping the tidal lagoon on the same day as supporting a third runway at Heathrow is a kick in the teeth not only for Wales but for the renewables sector and industries outside the capital. Thousands of workers will now miss out on high-quality employment and thousands of households will miss out on the benefits of zero-carbon energy.”

In May 2019, new plans we published for a tidal lagoon as part of a new Dragon Energy island off the Swansea coast. The island would have underwater turbines, floating modular homes, a solar farm and a hydrogen and oxygen site. Rob Stewart, Swansea Council leader and chairman of the Swansea Bay City Region task force said: "The new proposal is a larger and more ambitious renewable energy development that's built upon the natural tidal benefits of Swansea Bay and complimentary technology to generate zero-carbon power."

In December 2019, just before the general election, and with the development consent order due to expire in June 2020, an attempt to raise £1.2m was launched to enable works to proceed that would secure the planning permission. Shares were offered at £2.50, with a minimum subscription of £500.

In March 2021, a Prior Information Notice posted on the Welsh government’s Find a Tender suggested the scheme is under consideration again.

In October 2021, the project re-emerged as part of the £1.7bn Blue Eden project led by DST Innovations with support from Swansea Council and Associated British Ports. Ref https://www.constructionenquirer.com/2021/10/25/1-7bn-blue-eden-project-refloats-swansea-tidal-energy-plan/

Retrieved from "https://www.designingbuildings.co.uk/wiki/Swansea_Bay_tidal_lagoon"
Create an article