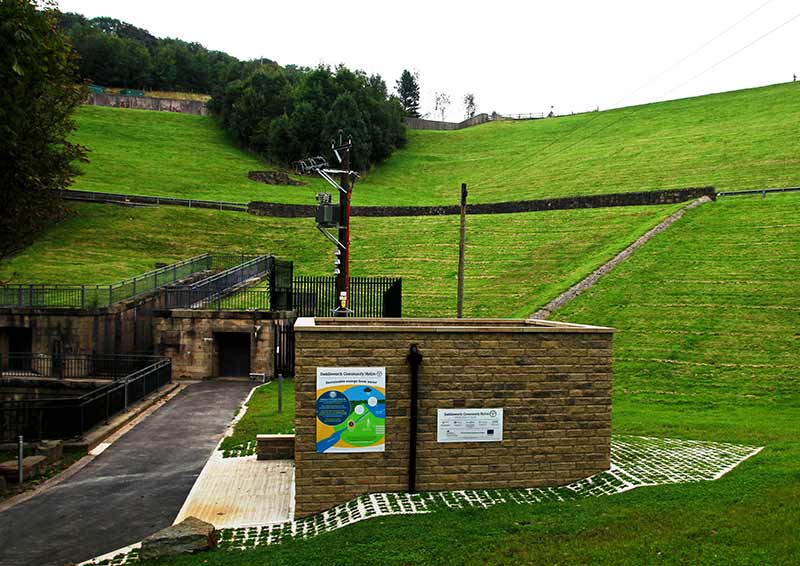 The story of a small-scale community enterprise tucked away in the Peak District shows what can be achieved by working together, and how we can take little steps to reduce our reliance on fossil fuels and combat climate change.

Dove Stone Reservoir is in the parish of Saddleworth, on the edge of the Peak District national park. The team at Saddleworth Community Hydro has invested in retrofitting an existing 30m high head dam at the reservoir site. The £½ million scheme generates 46kW of hydro-electricity continuously, distributed via the National Grid.

With a population of 25,000 scattered across eight villages, Saddleworth has a strong community spirit. In 2008, local activists arranged a showing of the Al Gore film An Inconvenient Truth. This sparked interest in harnessing water power in the Pennine valley. Previously, a proposed windfarm project had met opposition, and for some, hydropower was seen as a less obtrusive alternative.

United Utilities (UU), the reservoir owners, had a legal duty to release 16Ml/d to maintain the river, so they were approached for permission to use this to generate electricity. This was the first time UU had worked with a community group in this way – the project’s 25-year payback period would be far too long for many commercial enterprises.

An Industrial and Provident Society was formed with directors Bill Edwards (a retired BT engineer), Tony Bywater (a retired paper mill manager) and Andrew Thorne (a solicitor). Their determination, enthusiasm and unpaid hard work guided the society through the long process of obtaining Defra funding and permissions and investments from 167 shareholders. They also had the backing of local supporters including Oldham Borough Council and champions at Defra and UU.

Additional funding came from the European Agricultural Funding for Rural Development. Through the required EU tendering processes, Renewables First were appointed, not only because they had expertise in hydro schemes, but also because they were up front about their limitations. This was the first project of its kind in England requiring new infrastructure to divert the water through a new turbine house.

Construction started in December 2013. A mild winter thankfully enabled Defra’s completion deadline to be met at the end of March 2014. It was very fortunate that the civil subcontractors, CT Construction, did such a thorough job and were willing to deal with site visits from the society as relatively ignorant customers.

Commissioning took longer than expected. Whatever the depth of water in a reservoir, the legal requirement is to maintain a constant 185 l/sec of water flowing back into the river. This proved to be an interesting challenge in designing and implementing the control system, which would normally cope with constant head and variable flow.

Generation started in earnest in August 2014. Since then there has been a nearly continuous output of 40-50kW and a total of about 350MWh has been generated. Income will initially repay some short-term loans and thereafter will pay investors a modest annual return and provide a fund for local environmental and educational projects.

The project won the ICE North West Community Award for 2015 for its innovative design and community involvement.

This has been an interesting association between a large commercial enterprise (UU), Defra, the installation contractors and a small community group. What began as a new experience and a considerable challenge for all parties has delivered great rewards in terms of understanding and co-ordinating different outlooks and requirements. It is hoped that such co-operative efforts will become increasingly common leading to more local ownership of energy sources.

For further information on the Dove Stone hydro project, or the work of Saddleworth Community Hydro, please visit www.saddleworthhydro.co.uk

This article originally appeared as Small enterprise, great inspiration: Dove Stone Hydropower, published by the Institution of Civil Engineers on 11 August 2015. It was written by Alison Brittle, Board Member, Saddleworth Community Hydro.

Retrieved from "https://www.designingbuildings.co.uk/wiki/Dove_Stone_Hydropower"
Create an article