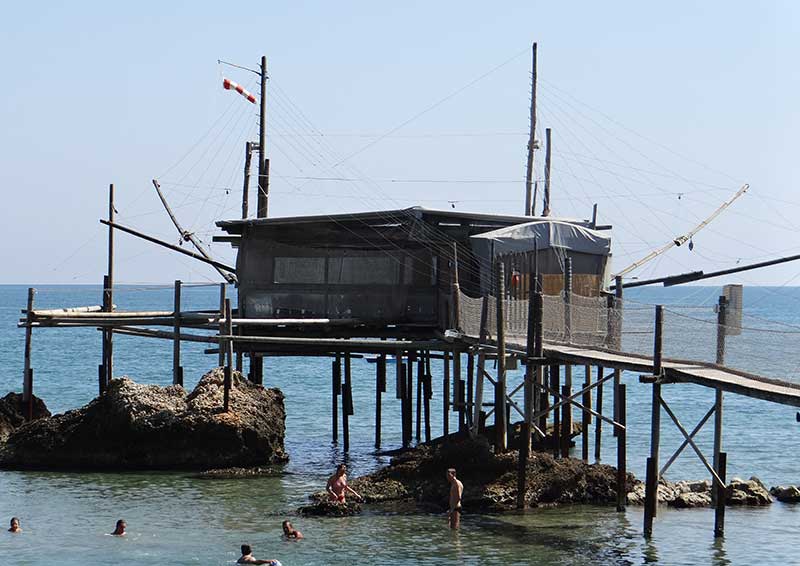 The Costa dei Trabocchi is a unique, enclosed stretch of coastline in the Abruzzo region in Italy, famous for its traditional wooden fishing structures – the Trabocchi. These structures may be centuries-old fish traps, but they also provide a contemporary case study in innovation and sustainability that can be applied in the UK and elsewhere.

Comprising wooden platforms and trestles, the Trabocchi are stationary structures used for fishing. Because they reliably bring in fish in situ, in all weather conditions, and remove the need to venture out to sea in fishing vessels, their popularity has endured for centuries. They are still in use today, attracting tourists as well as fish.

Documents referring to the Trabocchi date back to the 18th century and indicate that they first developed along the coast of the Adriatic Sea. It is likely, however, that their original prototype was developed in Phoenician times.

Aside from their aesthetic charms, the marine structures have long been part of the local economy, with Trabocchi-based fishing providing an important income for local families at the start of last century. They went on to become an iconic architectural symbol of Abruzzo after World War II, and today are a major tourist attraction.

Trabocchi are built with local timber such as oak, spruce and Aleppo pine, as well as other flexible natural materials. Combining different timber lengths and sizes means that the structures are solid, yet flexible and waterproof. They are also resistant to salt and can survive for more than a hundred years with only minimal maintenance.

The Trabocchi each comprise an elevated platform connected to the coast by a narrow trestle. They are anchored to the sand or rock with the trestles supported by natural piles as foundations. The platform houses their characteristic ‘antennae’, which are 10-15m-long arms suspended above the high tide level. The arms support the ‘trabocchetto’, a trap formed by a fine mesh net that is connected by winches. It is this net that catches the fish when it is raised up, like a long sieve.

The original meaning of trabocchetto is ‘deep trap’, a term from the Middle Ages for military wood constructions (trebuchet) designed as weapons against rival fortresses. 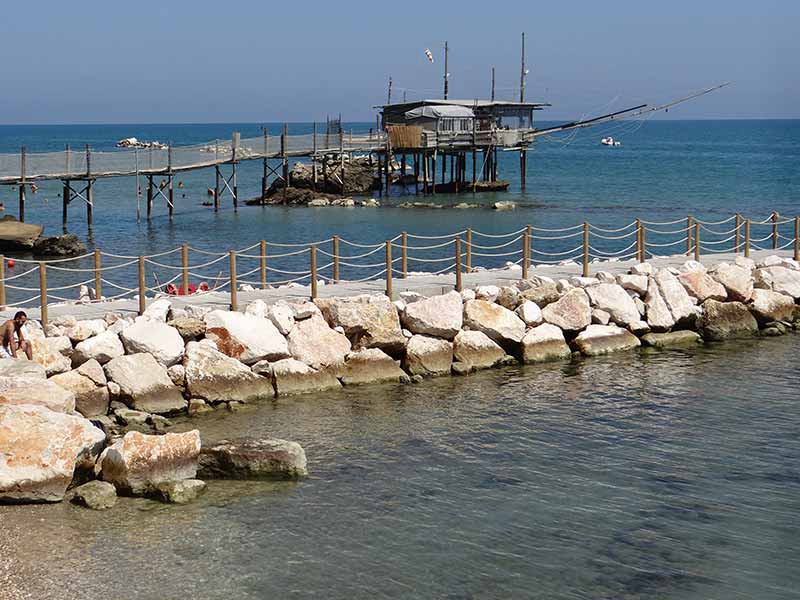 The Costa dei Trabocchi comprises a series of small bays with rocky foreshores. The Adriatic Sea has a sandy, gently sloping seabed and is not particularly deep. Its prevailing wind, the Maestrale, comes from the north-west.

The Trabocchi platforms are typically built at a minimum water depth of six metres. Although there are offshore oil platforms nearby, the water quality remains so good that it won a Bandiera Blu award in 2014.

The area has always been managed in such a way as to preserve the environment, accommodating its natural evolution, as well as its cultural and historical structures and relics.

Several Trabocchi have been refurbished in recent years, mostly funded by public money. Some of the structures have been electrified to make the job of hoisting up the nets less labour intensive.

One of the structures, Trabocco Punta Tufano, built in the early 1700's, was reconstructed in 2006 after major storm damage. What was distinctive about this restoration was the innovative use of sustainable materials. The structure was re-elevated based on new sea-level measurements and its pile extension was constructed from materials recycled from an old disused local railway. Not only is this a great use of waste construction materials, it also benefits the structure’s longevity.

The materials reclaimed from the railway are salt-resistant, with the corrosion index suitable for coastal conditions. It means that this Trabocco will endure as a fishing structure, a restaurant and tourist attraction for many decades to come.

It’s inspirational that this historic marine structure has been restored with reclaimed waste material to become useful, popular and relevant today. Old and new infrastructure coexists and offers both tourism and commercial value.

This is a model of coastal management that could be adopted here in the UK, and elsewhere, to help preserve our historical marine structures.

This article originally appeared as The Trabocchi – historic marine structures a lesson in sustainability and innovation, published by the Institution of Civil Engineers on 7 September 2015. It was written by Lavinia Melilla, Bechtel port and marine technical expert and ICE Fellow.

Retrieved from "https://www.designingbuildings.co.uk/wiki/The_Trabocchi"
Create an article