The Iron Bridge at Coalbrookdale in Shropshire, UK, was the first bridge (or indeed civil engineering structure) in the world to be made entirely of cast iron. East Shropshire was an important industrial area thanks to coal deposits near the surface, and it was here that Industrial Revolution was born.

The project was initiated in 1775, when a group including Abraham Darby III, Thomas Farnolls Pritchard and John Wilkinson became interested in creating a physical link between Coalbrookdale and the mines, foundries and quarries south of the Severn River. There was an abundance of coal and industry in area, but there was no bridge across the River Severn to carry its goods and people. In 1776, King George III granted permission for a toll bridge to be built over the river.

Thomas Pritchard (a local architect) was awarded the job of designing the bridge and in 1777 a scheme was agreed with a span of 27 m. However, Pritchard died later that same year leaving Darby the job of building this extraordinary structure.

Cast iron was previously shunned as being a material far too expensive to be used on large structures, but the blast furnace in Coalbrookdale lowered the cost of its production. Cast iron is a brittle material so it has surface cracks. In order to stop these cracks from propagating, the arch is held in compression. Compression in a structure is when all of the force is directed downwards. Arch bridges are semi-circular structures that transfer loads onto abutments.

In 1778, the bridge abutments were complete and in 1779 the giant iron castings were fabricated. The first two ribs were installed in July 1779, with each weighing 5 tonnes, and in the autumn the main iron superstructure was completed. Final completion was considerably later, in 1781, after the approach roads were finished. The bridge had a far-reaching impact on local society and the economy, on bridge design and on the use of cast-iron in buildings.

The arch finally spanned 30.5 m, with five arching ribs, each cast in two halves. Although the bridge is made from iron, and being the first of its sort, the construction has no precedent; the method chosen to create the structure and the construction details were heavily influence and adapted from traditional timber construction and carpentry, which Darby's workers would have been familiar with.

Blind dovetailed joints, where only half the thickness of the iron is in the shape of a dovetail, join the arched ribs to the radials while mortise joints (secured by wedges), connect the ribs to the horizontal and vertical members at each end of the bridge. 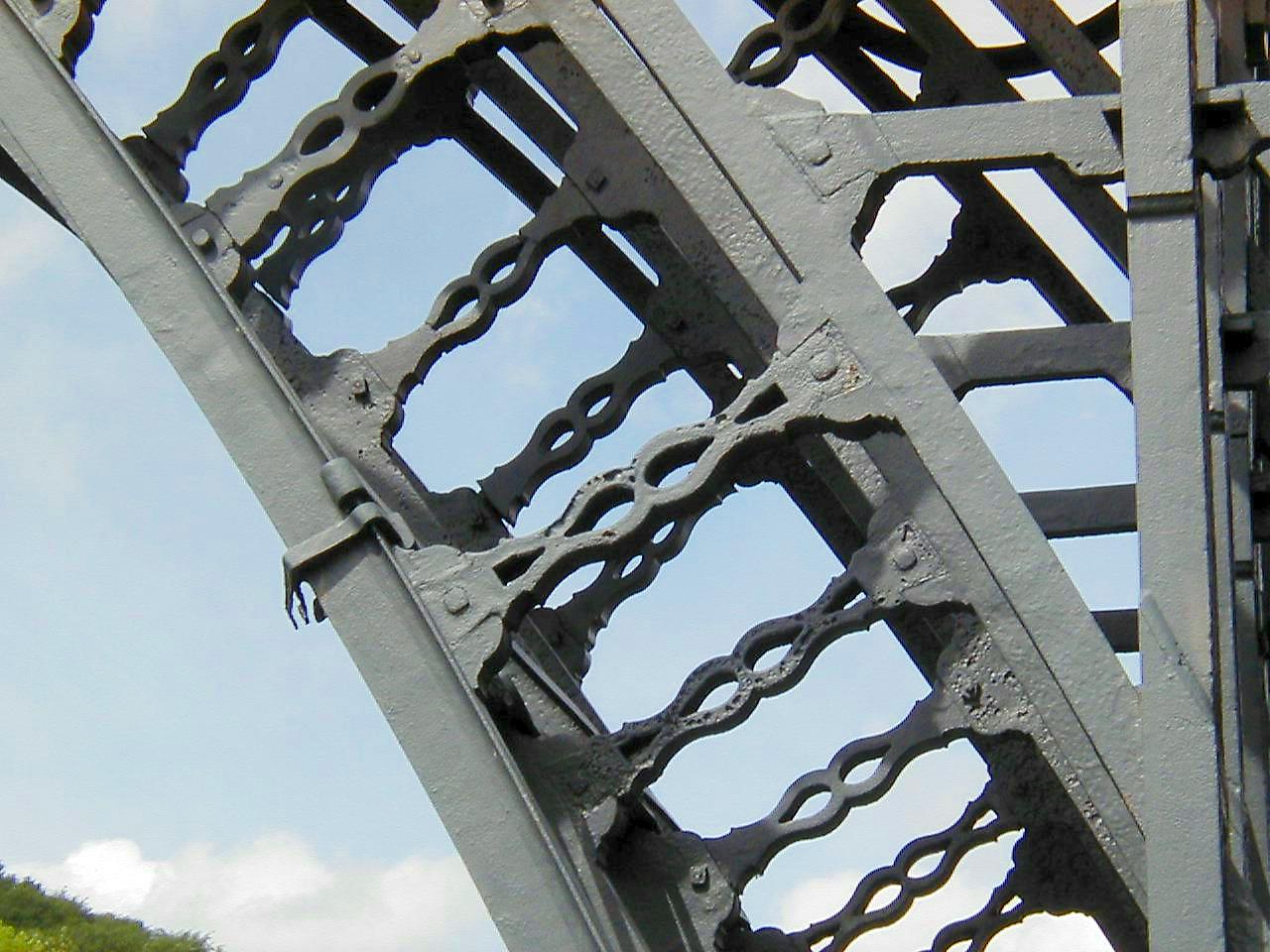 All the major components were put together in three months without a single accident and with little obstruction to boats on the river. It is likely that a timber scaffolding would have been employed as a support during erection of the ribs and to create a temporary span for the river traffic to pass beneath.

In the Great Flood of the Severn and Wye, between 10th-12th February 1795, the Iron Bridge was the only bridge left undamaged, which only added to its status as a marvel of contemporary engineering and an advertisements for the possibilities of metal structures.

The completion of the bridge marked out Ironbridge Gorge as one of the most technologically advanced areas in the world at the close of the eighteenth century. This achievement was given worldwide recognition when in 1986, when Ironbridge Gorge became the first of seven UK sites to be awarded World Heritage Status by the UNESCO (United Nations Educational, Scientific and Cultural Organisation), to celebrate the area's contribution to industrialised society and for a bridge which "had a considerable influence on developments in the fields of technology and architecture."

The bridge is now a Grade I listed building.

In November 2017, English Heritage launched a crowdfunding project to secure the future of The Iron Bridge.

A survey of the bridge's structure was undertaken, mapping the stresses and weaknesses in unprecedented detail. This revealed the differences in apparently identical components, as well as the various repairs attempted over the centuries. The survey showed the extent to which metal straps bolted around the original ironwork have failed, as well as bad cracking and shearing.

The geology of the gorge has caused structural problems to the bridge. The crown of the arch has risen by almost 10 cm as a result of the gorge walls gradually moving. An attempt to ameliorate this was made in the 1970s when a massive concrete inverted arch was installed under the river directly beneath the bridge.

The project will be English Heritage's first crowdfunding appeal to contribute to the £3.6m cost of the works. However, having already won a €1m (£885,000) donation from a German trust, the appeal only has to raise £25,000.

The restoration project will take 19 months and is being carried out in two parts, allowing the bridge to remain open to pedestrians.

The appeal reached it's £40,000 stretch target in a week compared to the predicted 1 month.

Donations can be made at: http://www.crowdfunder.co.uk/project-iron-bridge

Retrieved from "https://www.designingbuildings.co.uk/wiki/The_Iron_Bridge"
Create an article