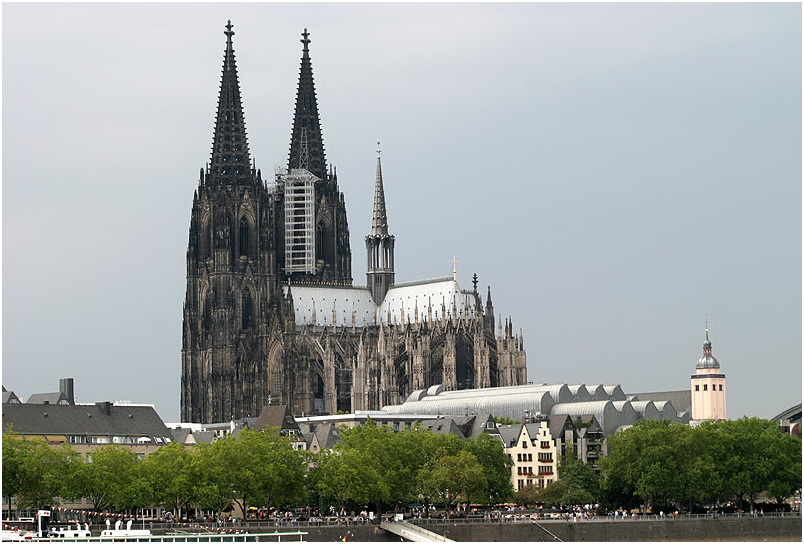 Cologne Cathedral is a Roman Catholic cathedral which serves as the seat of the Archbishop of Cologne. It is one of the most celebrated monuments of German Catholicism and Gothic architecture, and is the most visited landmark in Germany.

The cathedral is currently the tallest twin-spired church in the world, and the largest Gothic church in Northern Europe. At 157.38 m (515 ft) tall, the northern tower is 7 cm taller than the southern one. The towers have dominated Cologne’s skyline since they were completed in 1880.

Construction of the cathedral began in 1248, although the site on which it was built had already been occupied by several other structures, including a Roman temple and, from the 4th century, a square edifice of Christian buildings, followed by a cathedral that was completed in 818.

A new cathedral was built at the behest of the Archbishop Rainald of Dassel, who in 1164 acquired the relics of the Three Kings. The cathedral was proposed to appropriately house these items of great religious significance. 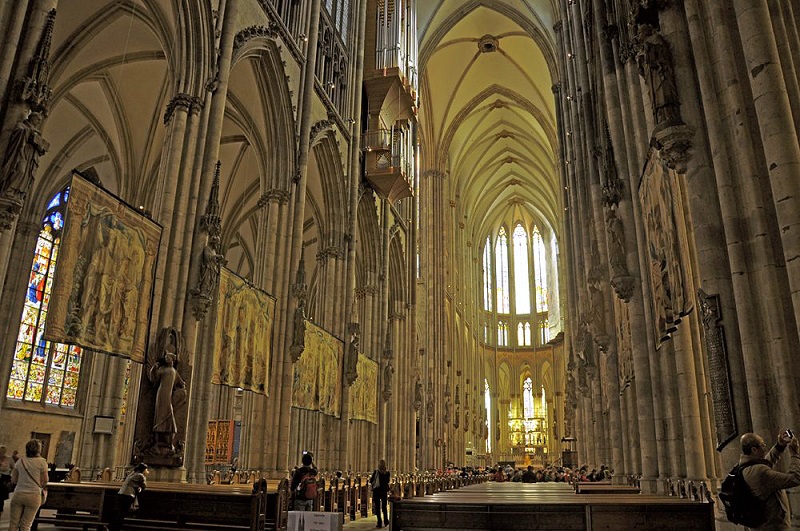 The cathedral measures 114.6 m long and around 45 m high, with two aisles on either side which provide support for one of the highest Gothic vaults in the world. On the exterior, flying buttresses take the outward thrust of the vault, modelled on French cathedrals such as Notre Dame.

The choir has the largest height-to-width ratio of any medieval church, at 3.6:1. It is characterised by a French-style arrangement of a tall arcade and a narrow triforium gallery lit by windows.

The foundation stone was laid in August 1248, with the eastern arm being completed and consecrated in 1322. Construction work was halted in 1473, leaving the south tower complete up to the belfry level, with a huge crane that was to remain in place for the next 400 years.

With the romanticism of the 19th century, the Middle Ages went through something of a positive reappraisal which, along with the discovery of the façade’s original plan, lead to a decision to complete the cathedral. The costs were funded by civic effort as well as the Prussian state.

Work on the cathedral resumed in 1842, using modern techniques such as iron roof girders but following the original medieval plans and drawings. Over the following years, the nave was completed and the towers added.

Completion was celebrated as a national event in August 1880, 632 years after construction began. 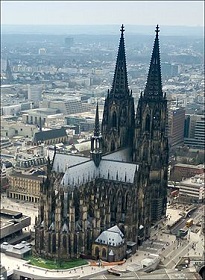 During the Second World War the cathedral was hit 14 times by aerial bombs, however, it remained standing despite being badly damaged.

The base of the northwest tower underwent emergency repairs in 1944 using poor-quality brick taken from a ruined building nearby. This emergency brickwork remained visible until 2005 as a reminder of the war.

The rest of the repairs to the war damage were completed in 1956. Since then, the cathedral has been almost constantly under repair and maintenance, to tackle the erosion of the stones by weather and pollution.

In 1996, the cathedral was added to the UNESCO World Heritage List. In 2004, it was the only Western site to be placed on the ‘World Heritage in Danger’ list, as plans were made to construct a high-rise building which would have had a negative visual impact on the cathedral. The authorities decided in 2006 to enforce height restrictions on nearby buildings, allowing the cathedral to be removed from the list.

Today, the cathedral is a major tourist attraction, with visitors climbing the 533 stone steps of the spiral staircase to a platform which offers a view over the Rhine.

Retrieved from "https://www.designingbuildings.co.uk/wiki/Cologne_Cathedral"
Create an article