In the UK, there is an abundance of castles, some in ruins, but many still standing and are open to the public. Castles are popular places to visit because they have history, drama and legend. Located 206 kilometres from London, in middle England, stands Nottingham Castle, best known because of the tales of Robin Hood. 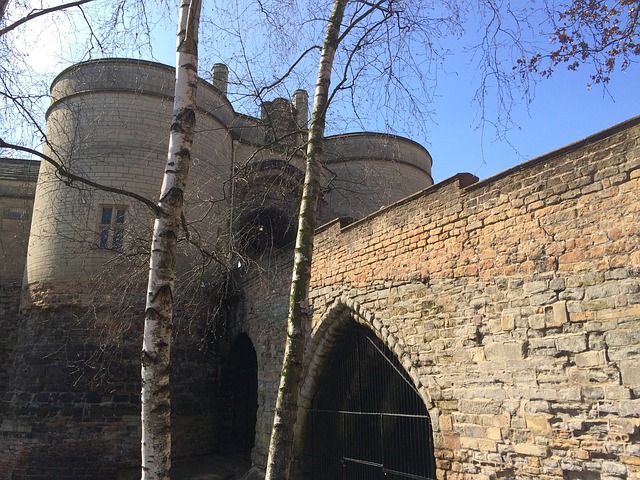 Nottingham Castle was built for William the Conqueror. After his victory at the Battle of Hastings in 1066, he set about having castles built up and down the country, as he suppressed any revolt against his authority.

Most of William’s castles were built to a Motte and Bailey design and Nottingham was no exception. This design was popular in Northern Europe at the time of William the Conqueror and so he brought it to Great Britain.

The site for Nottingham castle was perfect for a Motte and Bailey design, built on a hill called Castle Rock which overlooked the city. The Motte was a steep mound and at the top was the Keep, surrounded by a ditch. The Bailey was the flat part at the bottom of the promontory, where the castle’s residents lived.

These type of castles were relatively cheap and quick to build; made from soil and wood and they could usually be constructed in weeks.

During the reign of Henry the II, the castle was extended and stone was added to the structure to strengthen it. Richard the Lionheart, who, legend has it, was supported by Robin Hood, laid siege to Nottingham Castle in March 1194. The siege was successful and on the 17th April, he was once again crowned King of England.

The castle continued to be used by royalty, including Richard III who left Nottingham Castle to join the battle of Bosworth, where he died in 1485. His remains were found in under a car park in Leicester in 2012. He is now buried in Leicester Cathedral.

By the Elizabethan period, Nottingham had become a medium sized town, known for its leather trade. The castle was looked after by the 6th Earl of Rutland, a supporter of James I (the king Guy Fawkes attempted to assassinate in the Gunpowder Plot of 1604).

In 1642 Charles I was on the throne and rallied his armies at Nottingham at the beginning of the civil war, during which, many of Britain’s great castles were lost or damaged. After the war, many castles had their gatehouses and walls destroyed deliberately, so that they could not be used again should there be another civil war. Consequently, many of these castles fell into ruin.

Nottingham Castle was still standing after the civil war, but after Charles I was executed in 1649, a decision was taken to raze the castle to the ground.

However, in 1678 Henry Cavendish built another palace on the site of Nottingham Castle. In 1831, it was owned by the Duke of Newcastle. He was against a reform bill which had been put to parliament to improve the lives of British citizens. In Nottingham as well as in other parts of England there were widespread riots when the reforms were initially rejected and as a result, Nottingham Castle was badly damaged when rioters set fire to it. It remained damaged for more than forty years until Nottingham Corporation leased the site in 1875 and built the present structure which is modelled on the Stately Home design, built by Henry Cavendish in 1678.

Today the castle is a is a museum and a popular wedding venue.

Retrieved from "https://www.designingbuildings.co.uk/wiki/Nottingham_Castle"
Create an article