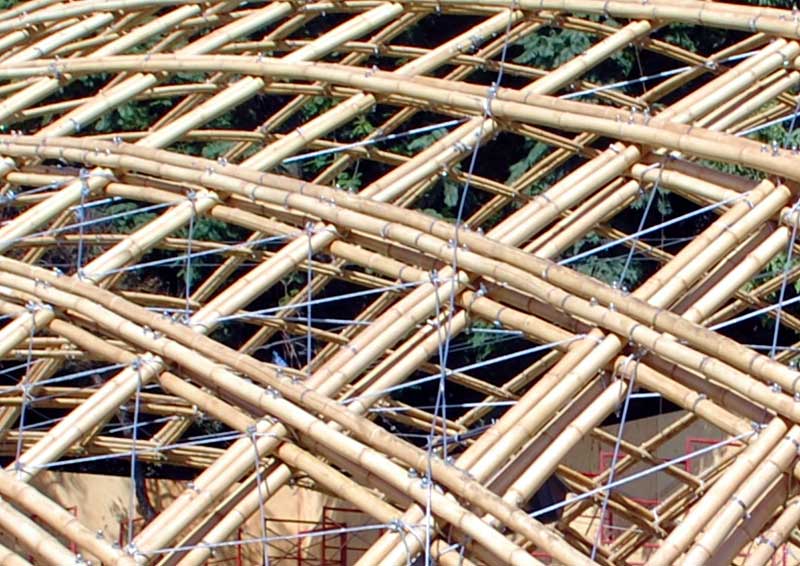 Natural organic materials such as bamboo have a very important and unique role in the effort to alleviate housing and infrastructure problems, particularly in developing countries. Their use is of a special relevance in the context of widespread damage and destruction caused by natural disasters owing to global warming, which in part is attributed to the vast use of polluting and high-energy-demanding materials, such as steel and cement.

Although bamboo has been identified as the most promising building material for decades; technical, normative and cultural challenges have prevented its widespread use in construction.

However, after almost four decades of systematic research and development into bamboo, there is sufficient scientific information to increase the use of bamboo as a substitute for the industrial and polluting materials in many applications of the construction industry.

Bamboo grows in abundance in many parts of the world, especially in tropical and subtropical regions. Bamboo forests play an important role in controlling water cycles, reducing erosion and sequestering carbon from the atmosphere.

The culms of four to five years of age can be effectively used in construction and other engineering products. An increased use of bamboo does not pose a risk for bamboo forests; on the contrary, it will create economic incentives for farmers to develop bamboo plantations and use the bamboo shoots for their everyday lives.

An increase in the use of bamboo in construction could lead to energy savings, conservation of the world's scarce resources and reduction in environmental pollution. Bamboo forests are the most easily available resources for many communities, which can be used to solve housing problems. This is also a challenge to the science and skills of engineers accustomed to using well developed technologies.

Even though bamboo is a fast-growing, high-yielding and easily renewable natural resource, the ability of engineers to use it in durable construction requires more research and development.

The structural efficiency of bamboo compared to that of other engineering materials such as steel has been shown, which may be attributed to the high strength of the uniaxial reinforcing fibres and the hollow cylindrical shape of the culm. However, these characteristics along with the geometrical irregularities of the raw material pose challenges to develop efficient and cost-effective structural joints.

In addition, the major factors facing the development of durable bamboo constructions are the inherent weaknesses of the material, such as high water absorption and susceptibility to fungal and insect attack. Bamboo contains hemicelluloses, starch, sugar, tannins, certain phenols and lignin, which can be attacked by soluble extractives, preventing it from having a good durability characteristic.

Following years of research and development since the 1970s in South America, there is sufficient scientific information to increment the use of bamboo as a substitute for steel in many applications. Studies using timber test methods have shown that outdoor laminated bamboo has properties comparable to timber and glue-laminated timber.

This article was originally published here on 30 Mar 2017 by ICE. It was written by Khosrow Ghavami and José Jaime García.

Retrieved from "https://www.designingbuildings.co.uk/wiki/Bamboo"
Create an article