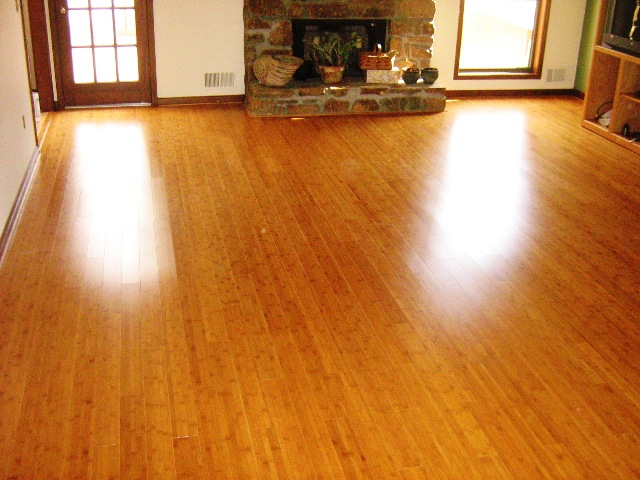 The term ‘flooring’ refers to the lower enclosing surface of spaces within buildings. This may be part of the floor structure, such as the upper surface of a concrete slab or floor boards, but typically it is a permanent covering laid over the floor. There are many types of flooring materials available.

[edit] What is bamboo?

Bamboo is grass that can be compressed into a floor material and nailed down or glued together. It is available in its natural pale yellow colour, but it can be stained to replicate other colours. It can also mimic the appearance of other wood flooring materials through painting or printing processes.

For significantly darker colours, bamboo must be exposed to high temperatures through a process known as carbonizing. This process can soften bamboo, making it more susceptible to visible scratches.

Bamboo has been used as a basic construction material for thousands of years. It was first introduced to Western markets as a flooring product in the 1990s, but was not initially well received by consumers who were unfamiliar with the physical properties of this material.

It has been considered one of the most promising building materials for decades; but technical, normative and cultural challenges have prevented its widespread use in construction. Bamboo was previously thought to be inferior to wood in terms of hardness (and thus more prone to being dented and scratched). However, it scores in a comparable range on the Janka hardness rating scale.

For instance, the rating for oak scores in a range from 1290 (for red) and 1360 (for white). Traditional bamboo flooring scores range from 1180 to 1380. At the higher end of the scale, manufactured bamboo flooring products range from 3000 to over 5000, placing it above the range of Brazilian Cherry (2350).

When this information became widely available, bamboo gained acceptance as a viable flooring option. It has gained popularity due to its strength and environmental friendliness. It also exhibits moisture and insect resistant properties.

Depending on the type of product, bamboo flooring can be installed in much the same way as its hardwood counterparts. Methods for solid, stranded and horizontal planks include; nailed down tongue-and-groove, interlocking click and lock or glued down. In each instance, the planks are installed over a thin underlayment of foam.

Engineered bamboo should be installed using the interlocking click-lock method. A thin layer of foam is also used under this type of plank.

Bamboo grows in abundance in many parts of the world, especially in tropical and subtropical regions. Bamboo forests play an important role in controlling water cycles, reducing erosion and sequestering carbon from the atmosphere.

The type of bamboo most commonly used for flooring is known as Moso or tortoise-shell. This species can grow up to approximately 25 cm per day in temperate climates. The speed of growth is one of the features that makes bamboo an environmentally friendly building material for flooring and other construction products.

However, some of the manufacturing processes have raised environmental issues, particularly with regard to resins used in the production of stranded and horizontal planks. One of the adhesive substances used in the manufacturing process may contain the toxin, urea-formaldehyde. This substance is sometimes found in other types of engineered flooring.

Bamboo floors are relatively easy to maintain. The procedure includes:

At the end of its life, bamboo flooring can generally be recycled.

Retrieved from "https://www.designingbuildings.co.uk/wiki/Bamboo_flooring"
Create an article