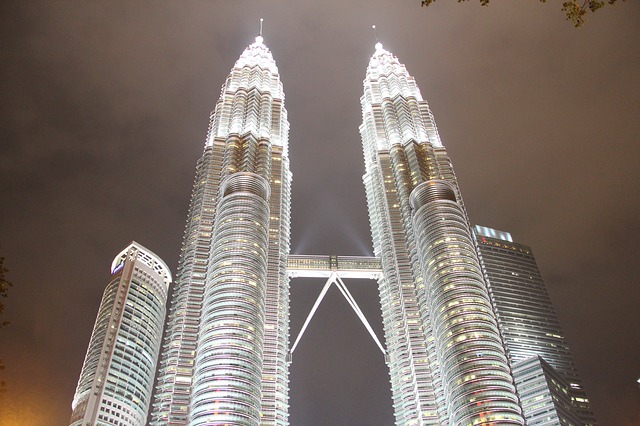 The Petronas Towers are twin skyscrapers in Kuala Lumpur, Malaysia. Standing at 451.9 m (1,483 ft), when they were completed in 1998 they became the tallest buildings in the world, a title they held until Taipei 101 was constructed in 2004.

The project’s developers were a consortium of private investors together with the Malaysian government and the national oil company Petronas. They aspired to construct a building that would establish Kuala Lumpur as the commercial and cultural capital of Malaysia. The towers have become a national landmark and remain the tallest twin towers in the world.

The Argentine architect Cesar Pelli was chosen for his postmodern design that was deemed to suitably express the ‘culture and heritage of Malaysia.’ The design was inspired by characteristics of Islamic architecture such as repetitive geometries and arabesques.

Each of the towers’ floor plates is based on the simple geometric forms of two interlocking squares which creates an 8-pointed star shape. This represents the Islamic principles of ‘unity within unity, harmony, stability and rationality’. The resulting curved and pointed bays create a façade reminiscent of temple towers, and the bridge at the 41st floor that links the two towers is intended to evoke the idea of a dramatic gateway to the city.

Planning began in 1992, and excavation work began in 1993. At the peak of the excavation work, 500 truckloads of earth were being moved every night. Because of the challenging ground conditions, the towers required the world’s deepest foundations. These consisted of 104 concrete piles, ranging from 60-114 m, bored deep into the ground. 13,200 cubic metres of concrete was continuously poured for 54 hours for each tower, in what was the single largest and longest concrete pour in Malaysian construction history.

Work on the superstructure for the 88-floor towers began in 1994. The towers feature multi-faceted walls of 33,000 stainless and 55,000 glass panels which were designed to diffuse sunlight and reduce noise. The towers step back to create a tapering profile and are topped with 23 segment spires, and a ring ball consisting of 14 rings of varying diameters designed to invoke Islamic minarets.

The interiors of the towers incorporate designs based on intricate weaving patterns and bertam palm wall matting, in keeping with local traditions.

The towers were completed in 1996 and inaugurated in 1999. The final cost of the construction was US$5.6 billion.

The base of the towers is occupied by a 140,000 sq. m retail centre that also includes a philharmonic theatre, aquarium and art gallery.

The double-decker skybridge is designed to slide in and out of the structure to accommodate the differential movement of the two towers, and is open to the public as a popular tourist attraction.

The towers are now instantly recognisable as an icon of Malaysia and have become part of popular culture, featuring in films such as Entrapment. 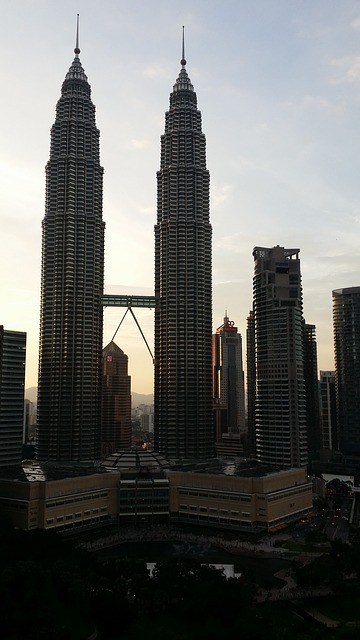