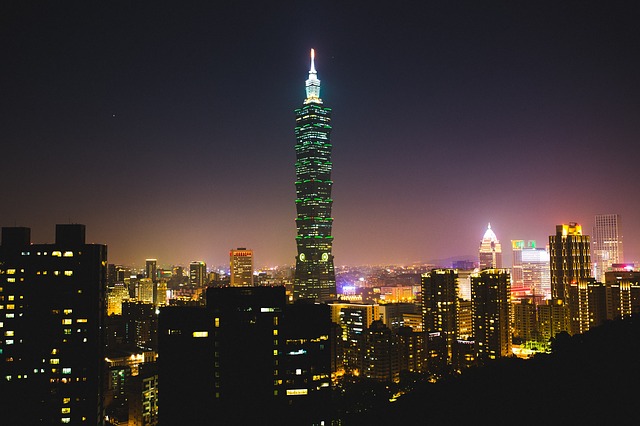 Taipei 101 is a supertall skyscraper located in the Xinyi District of Taipei, Taiwan. Designed to resemble an enormous bamboo stalk, it has a height of 508 m and comprises 101 storeys above ground, and 5 levels below ground.

On its completion in 2004, it was the world’s tallest building, beating the Petronas Twin Towers of Malaysia, before losing the title in 2010 to the Burj Khalifa in Dubai. It was also the first building in the world to break the half-kilometre mark. It includes indoor and outdoor observation decks which offer 360-degree views of the city and are popular tourist attractions.

In 2011, it was awarded the LEED platinum certification, the highest award according to the LEED rating system, making it the world’s tallest green building.

As an icon of Taiwan, the building’s design is rich in symbolism. The number 101 represents January 1, and as such it has become a central feature of the country's New Year celebrations. 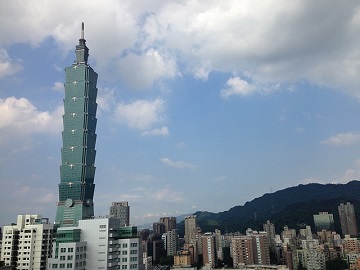 Taipei 101 was designed to emphasise Taiwan’s growing prosperity on the world stage at the start of the 21st century, and was intended to symbolise technology’s evolution fused with the traditions of Asia. The building features many pan-Chinese and Asian elements mixed with a postmodern architectural style.

For example, curled ruyi figures proliferate throughout the structure as a design motif, rendered in industrial metal. It is an ancient talisman associated in art with heavenly clouds, and connotes healing and protection.

The tower is designed to rise from its base in a series of 8-storey modules, each flared outward, evoking the traditional form of Chinese pagodas. The top is capped by a smaller tower which forms a pinnacle.

The façade system of glass and aluminium panels is installed onto inclined, moment-resisting lattices tied back to ‘mega-columns’ every 8th-storey and contributing to overall lateral rigidity. The façade system is capable of withstanding up to 95 mm (4 in) of seismic lateral displacement without damage.

The building incorporates double-deck elevators built by the Toshiba Elevator and Building Systems Corporation. In 2004, these elevators set a new record for the fastest ascending speeds, at 60.6 km/h (37.7 mph), or 16.83 m per second. The record has since been broken by lifts in the Shanghai Tower.

Because of its proximity to geological fault lines, and the propensity in the region for typhoons, pioneering engineering work had to be carried out to make the building stable and safe. The construction process involved 36 high-performance columns, including 8 ‘mega-columns’ packed with concrete. At 8-storey intervals, outrigger trusses connect the exterior columns to the columns in the building’s core.

The building’s foundations are reinforced by 380 piles driven 80 m into the ground. These piles have a diameter of 1.5 m and are capable of bearing a load of 1,000-1,320 tonnes.

As an indication of the building’s structural stability, during construction in 2002, a 6.8-magnitude earthquake struck Taipei, causing two cranes to topple from the 56th storey, and killing five people. However, the building itself incurred no structural damage and construction work was able to resume shortly after.

It includes an innovative 660-tonne tuned mass damper (TMD). This gold-coloured spherical steel pendulum with a diameter of 5.5 m, is located in a multi-storey cavity near the top of the tower. The TMD sways, thereby offsetting movements caused by strong winds. It is the largest damper sphere of its kind in the world and cost NT$ 132m (US$ 4 m). In August 2015, a typhoon swayed the damper by 100 cm (39 in).

The building was the first of its kind to be awarded the highest LEED rating in 2011, making it one of the greenest skyscrapers in the world.

Its blue-green glass curtain walls are double-paned and glazed, and offer heat and UV protection. Their high reflectivity allows them to block solar heat gain by up to 50%.

At the top of each of the 8 modules are the 'mechanical' floors accommodating waste systems, ventilation equipment, water storage and other services. The roof and façade-recycled water system meets 20-30% of the building’s water requirements.

Retrieved from "https://www.designingbuildings.co.uk/wiki/Taipei_101"
Create an article