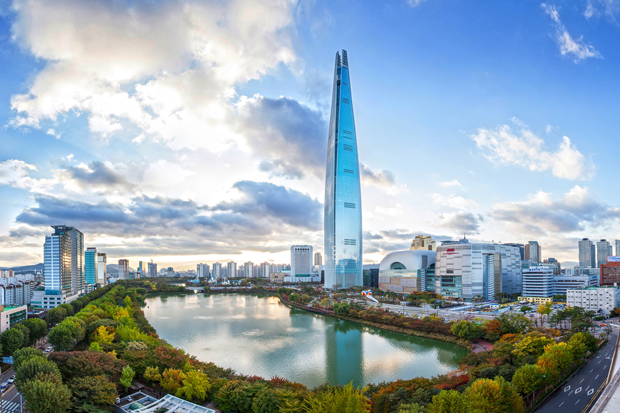 On 4 April 2017, the Council on Tall Buildings and Urban Habitat (CTBUH) officially acknowledged the newly-completed Lotte World Tower as the fifth tallest building in the world.

Built with the 10-storey Lotte World Mall at its base, which opened in 2014, the tower is a slender cone with gently-curved convex sides. The architects Kohn Pedersen Fox Associates used pale-coloured glass for the exterior, drawing inspiration from Korean ceramics, porcelain and calligraphy. 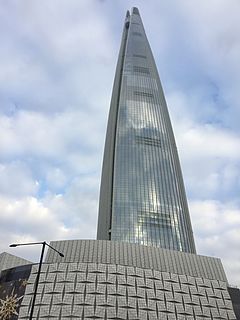 The 123-storey tower contains a variety of functions, including retail, offices, luxury hotel, concert hall with 2,000 seating capacity, aquarium, and cinema. It also boasts the world’s highest glass-bottomed observation deck, which visitors can walk across at 500 m (1,640 ft) above ground.

The roof structure is 120 m-high and is constructed using 12 m-high steel counterparts, each weighing 20 tons. It is resistant to earthquakes of up to 9 on the Richter scale, and wind speeds of up to 80 m/s.

Other notable features include the world’s highest swimming pool in a building, on the 85th floor, and the world’s fastest elevator, capable of taking people to the top in just 60 seconds.

Retrieved from "https://www.designingbuildings.co.uk/wiki/Lotte_World_Tower"
Create an article