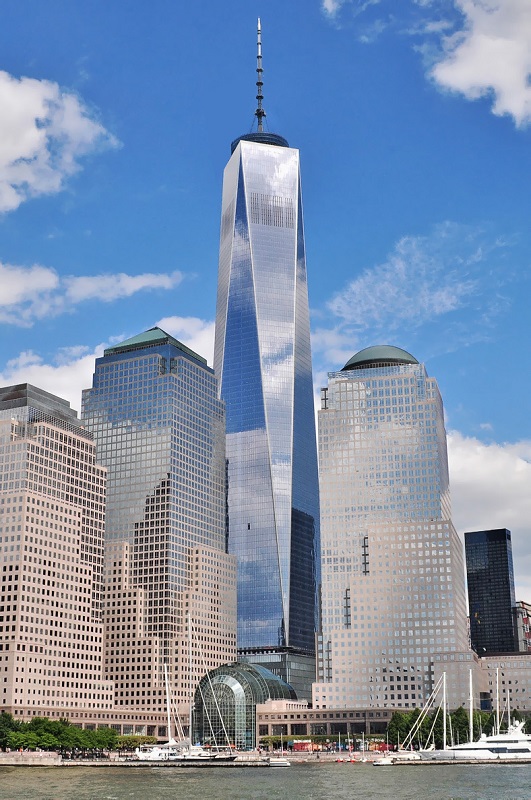 One World Trade Center (1 WTC) is a 'supertall' skyscraper built on the Lower Manhattan site of the Twin Towers which were destroyed on 9/11. It was designed by architect David Childs of Skidmore, Owings & Merrill (SOM).

1 WTC has a total height of 1,776 ft (541 m), an intentional reference to 1776, the year the United States Declaration of Independence was signed.

Despite controversy about whether the mast on top of the skyscraper should be included in the measurement, the Council on Tall Buildings and Habitat (CTBUH) decided that it constitutes a spire, as it is a permanent part of the architecture. This means it can be classed as the tallest building in the USA, and currently (2016) the fourth-tallest in the world.

It is also the most expensive skyscraper of all time, having cost $3.9 billion (£2.5 billion), the first tall building to exceed $2 billion. 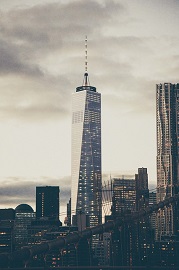 In 2002, the Lower Manhattan Development Corporation held a competition to decide how to redevelop the Ground Zero site and memorialise 9/11. A design by Daniel Libeskind was eventually selected as the winner, under the name of the ‘Freedom Tower’.

This design was then adapted and changed by David Childs of SOM, with further redesigns taking place in 2005 after the New York Police Department raised concerns about safety. Redesigns included a 57 m (187 ft) concrete base, or ‘podium’, to make the building more secure. The original plan for the base to be covered in decorative prismatic glass was also scrapped, in favour of a simpler, steel-and-glass façade.

From the 20th storey upwards, the square edges of the cubic base are chamfered back. This creates 8 tall isosceles triangles which form an elongated square antiprism. The tower is a perfect octagon near its centre, and culminates in a square glass parapet, oriented 45-degrees from the base.

The 'crystalline' form of the parapet creates a vibrant kaleidoscope effect, with light refracting in different directions throughout the day.

At the top of the building a 124 m (408 ft) sculpted mast contains a broadcasting antenna which rises from a circular support platform and is secured by a system of cables. A beam of light is projected from the spire at night and reaches more than 300 m (1,000 ft) above the tower.

The building has a core of 3 ft thick reinforced concrete stairwells, elevator shafts, and risers. These help it withstand high winds and earthquakes. At the base, window-less concrete walls are blast-resistant and protect against ground-level attacks. This has drawn criticism for being too 'paranoid' and resembling an 'over-ground concrete bunker'.

A number of sustainable features were incorporated in the building. Much of the structure and interior were built from recycled materials, including gypsum boards and ceiling tiles. In addition, ultra-clear glass windows allow maximum daylight penetration, while artificial lighting is programmed to automatically control the brightness on clear days. Rainwater-collecting tanks help to cool the tower and irrigate landscaping, reducing water consumption by an estimated 30% beyond the saving in a typical water-efficient building in New York. Heating is generated by steam, with limited oil or natural gas utilities on-site.

Construction work began in April 2006, and in April 2012 it became the city’s tallest structure when it surpassed the height of the Empire State Building. Topping out was achieved in August 2012, and in May 2013 the spire was completed. The building was officially opened in November 2014.

The ‘One World Observatory’, an enclosed observation deck, opened in 2015 and is already a popular tourist attraction.

Retrieved from "https://www.designingbuildings.co.uk/wiki/One_World_Trade_Center"
Create an article