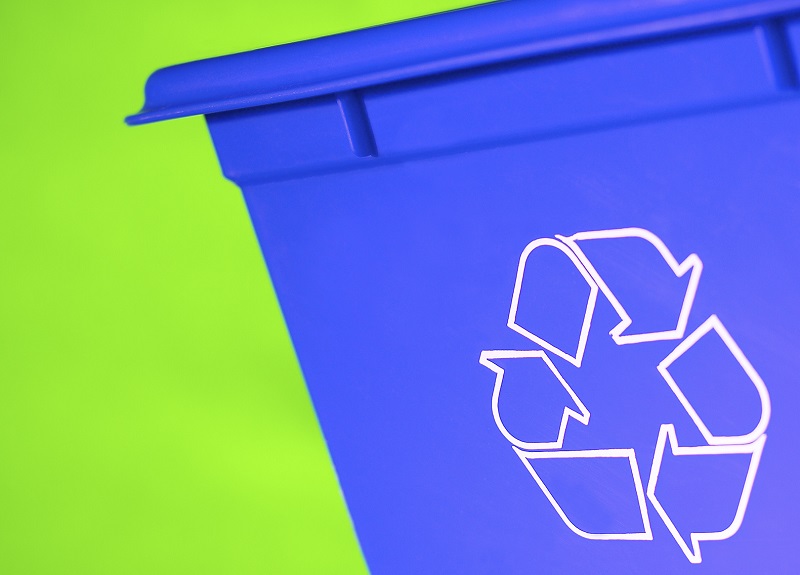 The waste hierarchy (sometimes simplified as 'reduce, re-use, recycle') sets out an order of preference for actions to reduce and manage waste. The overall aim of the hierarchy is to generate the minimum waste possible by using every material in every way possible. The most preferable option is 'prevention', at the top of the hierarchy with the least preferable 'disposal' at the bottom.

The waste hierarchy illustrated below is from the Defra 2011 publication. 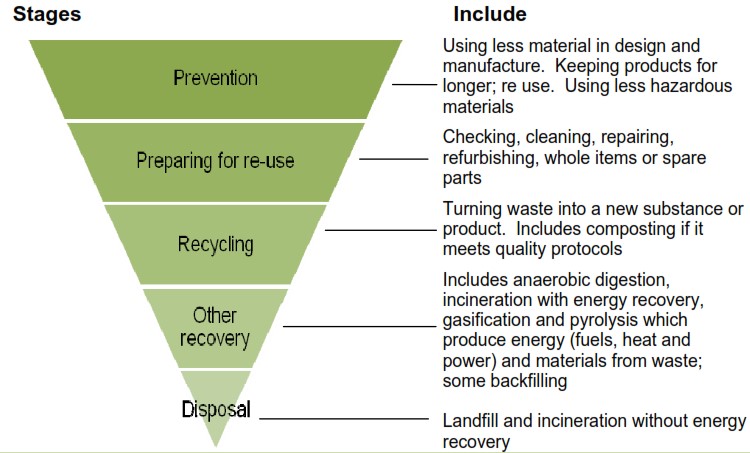 A recycled material is one that is adapted or transferred to a new use after its former use has been brought to an end. The new use may be similar to the former use (e.g recycled bricks used in new construction work) or it may be completely different, e.g steel which was once a universal column or beam recycled into automobile panels.

Recycling can help make a positive environmental impact on the planet. It saves resources, reduces waste, minimises air and water pollution and, because fewer, new resources are consumed for manufacture, it reduces carbon emissions.

A building may be deconstructed if it has reached the end of its life or is deemed no longer to be useful. In either case, it may not mean that the building can no longer serve its original function, rather, economics have dictated that a new building may bring more financial returns or a greater general benefits. In either case, deconstructing the building may yield a rich harvest of materials that can be recycled, depending on the original construction technique. Metals can be recycled relatively easily, bricks, roof tiles and roof slates can be reused, but wood if it has been fastened excessively with nails or strong adhesive can be very difficult to remove without damage. (Wood fragments can be broken down into strands to make new structural timber components such as laminated veneer lumber (LVL)).

Materials that can be directly recycled include metals (especially aluminium and steel), glass, paper, cardboard, plastics, electronics, batteries, textiles and tyres. A more indirect form of recycling is the composting or other conversion of biodegradable waste e.g food and garden waste.

Standards offer recycling guidance such as ISO 15270:2008 for plastic waste and ISO 14001:2015 for environmental management control of recycling.

In recent years, general recycling has been greatly facilitated by recycling centres that allow the public to discard their waste responsibly rather than just throwing it into the rubbish to end up in landfill. Household collections also encourage recycling of a host of recyclable materials including paper, cardboard, glass, plastic packaging, and food waste.

Recycling challenges the old linear economy model comprising 'make, use and dispose'. In that system, the earth’s limited resources are, in the long run, wasted as the product usually ends up in landfill. Recycling (and reuse) break this mould, as once the life of a product in a first use is over, it can be recycled (or remanufactured) for a new life in another use.

Recycling is part of the circular economy as in theory products like steel, aluminium and paper may be recycled many times with little wastage at each reprocessing point.

The circular economy is a concept in which everything is engineered to be constantly reused or recycled. It requires rethinking of design, manufacturing, selling, re-using, recycling and consumer ownership to keep resources in use for as long as possible and to extract maximum value.

Retrieved from "https://www.designingbuildings.co.uk/wiki/Recycled_material"
Create an article