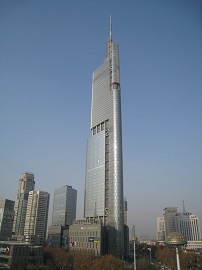 There is no established definition of what constitutes a ‘tall building’, instead there are several different criteria that typically determine whether a building can be considered to be tall.

Firstly, it is important to consider the urban context of the building. If a 10-storey building is in a central business district (CBD) surrounded by high-rise buildings of 20-storeys, then it may not be considered particularly tall. However, if a 10-storey building is in a suburban area that is predominantly low-rise, it would be considered to be a tall building. Historic England suggests that definitions of tall buildings should be 'based on evidence assessing the local context'. This means that definitions of what constitutes tall will vary from place to place. For example, Cambridge City Council defines a tall building as anything that 'breaks the existing skyline and/or is significantly taller than the surrounding built form'. Whereas Oxford has traditionally defined anything above the parapet height of the 18.2m Grade II-listed Carfax Tower as 'tall'. Ref https://historicengland.org.uk/whats-new/news/tall-buildings-advice-consultation/

Secondly, it can also be dependent on proportion. Buildings that are not particularly tall in terms of number of storeys can considered ‘tall’ if they are slender. Whereas, a building that is relatively tall but has a large footprint (such as a ‘groundscraper’) may not be considered ‘tall’.

The Council on Tall Buildings and Urban Habitat (CTBUH) defines a ‘supertall’ building as one that is more than 300 m (984 ft) in height. This classification is exceeded by ‘megatall’ buildings which are those exceeding 600 m (1,968 ft) in height.

A high-rise building is defined variously as a building in which:

The Hackitt Review published following the Grenfell Tower Fire considered that higher risk residential buildings (HRRB) were those of 10 storeys or more.

Retrieved from "https://www.designingbuildings.co.uk/wiki/Tall_building"
Create an article