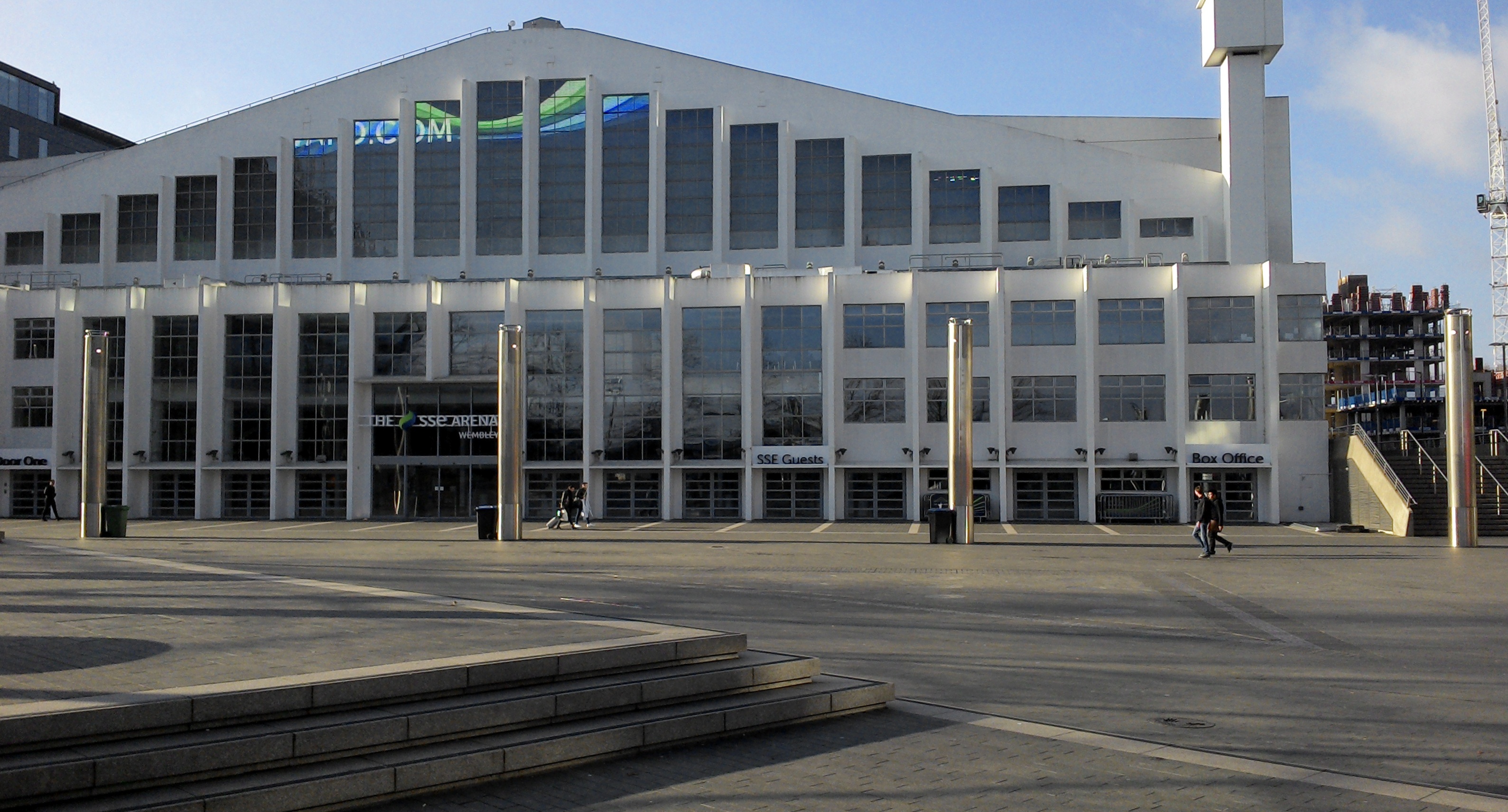 Wembley Arena, now officially known as The SSE Arena, Wembley, is one of the most iconic arenas in the UK, originally hosting swimming and other sporting events and later live concerts.

Historically, the building's main claim to fame is its adventurous use of reinforced concrete. The roof structure was highly inventive for its time, and successfully answered the need for a wide-span, unobstructed space which could be built within a year, in time for the 1934 Empire Games, now called The Commonwealth Games. The building is Grade II listed.

Wembley Stadium had been opened by King George V in 1923 as the stadium for the British Empire Exhibition, which was held in 1924 and 1925. When the exhibition closed the site was considered by many to be a vast ‘white elephant’. It was bought by an Edwardian speculator, James White, who planned to sell off the buildings.

Arthur Elvin, an ex-RFC officer who had worked in a tobacco kiosk at the British Empire Exhibition and had previous experience working for a scrap metal firm, was employed by White to oversee the demolition of the Wembley site. After his nine-month contract, he had earned enough money from the sell-off of buildings to offer to buy the stadium from White in ten yearly instalments. However, facing bankruptcy, White committed suicide in 1927, forcing Elvin to raise £150,000 in two weeks to buy the stadium. He financed this by forming the Wembley Stadium and Greyhound Racecourse Company.

In 1932, Elvin, partly inspired by seeing an England v. Canada ice hockey match, saw an opportunity for an indoor venue that would serve as the largest covered swimming pool in the world, as well as being able to accommodate ice hockey, skating, boxing and wrestling, amongst many other shows, exhibitions and events. 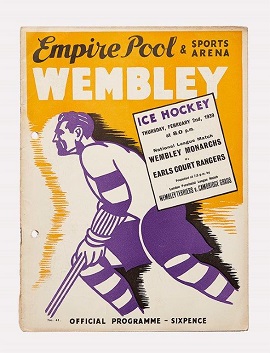 When it came to designing the Empire Pool, Elvin commissioned Sir Owen Williams, the same engineer who had designed the British Empire Exhibition and Wembley Stadium. Williams was a strong advocate of reinforced concrete construction, and saw the Empire Pool project as a means of demonstrating just how attractive and ground-breaking architecture could be using concrete engineering. No architect was employed in the project. Construction was supervised by R.J. Fowler, Wembley Urban District Council’s chief building inspector, who had also supervised the construction of the stadium a decade earlier.

As the arena was due to host the 2nd Empire Games in August 1934, the construction schedule was relatively tight. Yet this failed to deter Williams’ ambition and he designed a single space, uninterrupted by pillars, with a proscenium that would be the largest single-span arch in the world at that time.

The geometry of the building is symmetrical as this regular, repetitive form was to aid with the construction time limitations. The external fins leading to the tapered internal roof beams serve as a counterbalance to the ramped seating and act to stiffen the 236 ft. roof. However, though the roof was the widest reinforced concrete span in the world when built, it is much more than just a wide-span structure that was constructed at astonishing speed. Through its structure it creates a memorable effect without the need for any additional architectural treatment. The rhythm of fins and ribs, with the water towers acting as long-stops, create a distinctive overall design. 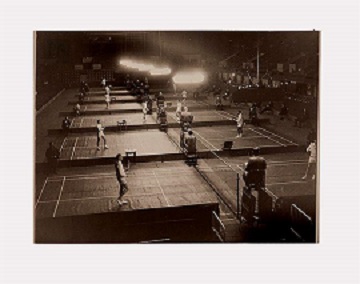 There was no steel designed into the building's construction; instead it was entirely made out of reinforced concrete and glass. Indeed, the original structure was naturally illuminated to dramatic effect by the vast windows at both east and west ends, as well as from the 56,000 sq. ft. of glass between the spans of the roof arches.

The western end of the arena was designed as a two-storey structure accommodating the main entrance area on ground level and offices above. This annex-type structure was repeated at the eastern end (now the main entrance), with the ground floor being used for kitchens and additional floor space for the pool area, with offices again on the first floor level. While the height of the roof provided adequate ventilation, the heating, lighting, refrigeration and pool filtration systems were all electric.

Williams used high quality reinforced concrete, which has stood the test of time far better than many other examples of the material.

Each external corner of the building was fixed with water towers that, whilst not part of Williams’ original design, nor being used any longer, have been retained as a distinctive feature of the arena.

The Olympic-sized swimming pool was 200 ft. long with a deep end of 16 ft., and held a total of 700,000 gallons of heated water. The innovative credentials of the pool were confirmed by the early use of underwater illumination, and by it being the first to have a wave-making machine, forming in the deep end and crashing in the shallow end. There was also a 40 ft. paddling pool.

The Empire Pool, as it was then known, was opened on 25 July 1934 by the Duke of Gloucester and promoted as ‘London’s greatest pleasure resort’. The holding of the Empire Games’ boxing, wrestling and aquatics competitions in the building led the press to draw favourable comparisons with Madison Square Gardens.

Skating and ice hockey became very popular during the 1930s, with spectator attendance rising to 450,000 in 1936. Nevertheless, it would take a full 12 days for the pool to be drained and the false floor and ice-making equipment to be installed ready for such activities.

Despite hosting up to 4,000 swimmers each day it never reached its full potential as a public swimming pool and, after closing in 1939 at the outbreak of war, the swimming pool was not reopened and never used for swimming again except during the 1948 Olympic Games.

After this, the arena was converted permanently to a sports venue, hosting ice hockey, boxing, basketball, tennis and many other sports over the following decades. There were also pantomimes on ice, and swimming spectacles that, ironically in a former swimming pool, required the use of temporary tanks to hold the water.

Two popular music events were held at the Empire Pool in 1959. These led to pop and rock concerts being held regularly in the arena from the late 1960s onwards, with audience capacities ranging from 8,000 to 12,000.

Some of the biggest names in popular music have, and continue to, play at Wembley Arena: The Rolling Stones, The Beatles, Led Zeppelin, David Bowie, Yes, Michael Jackson, U2, Tina Turner, The Who, ABBA, Stevie Wonder, Dire Straits, Rod Stewart, Queen, Kiss, Luciano Pavarotti, and many more.

In 1976, the Empire Pool was awarded Grade II Listed status, recognising it as a building of special architectural interest, technological innovation and virtuosity. It was renamed Wembley Arena in February 1978.

The venue was renovated, along with Wembley Stadium, as part of the early-21st century regeneration of Wembley Park. Costing a total of £36m, the main alteration to the arena was that the main entrance was turned around to face the stadium, and a new public square created to provide a natural entry space. The arena's capacity was also increased to 12,500 people, making it London's second-largest indoor arena (after The O2), creating a compliment to Wembley Stadium's capacity of 90,000.

The new arena opened to the public on 2 April 2006, with a concert by Depeche Mode.

The building was renamed The SSE Arena, Wembley on 1 June 2014 after SSE plc bought the naming rights to the venue for a period of 10 years.

Today The SSE Arena remains a popular attraction for visitors, with 1.2 million tickets being sold in 2003. It is also a popular venue for corporate events and conferences, being able to cater for a minimum of 3,000 attendees.

Interior before and after showing the original swimming pool and the current venue.

Exterior before and after the recent redevelopment of Wembley Park.