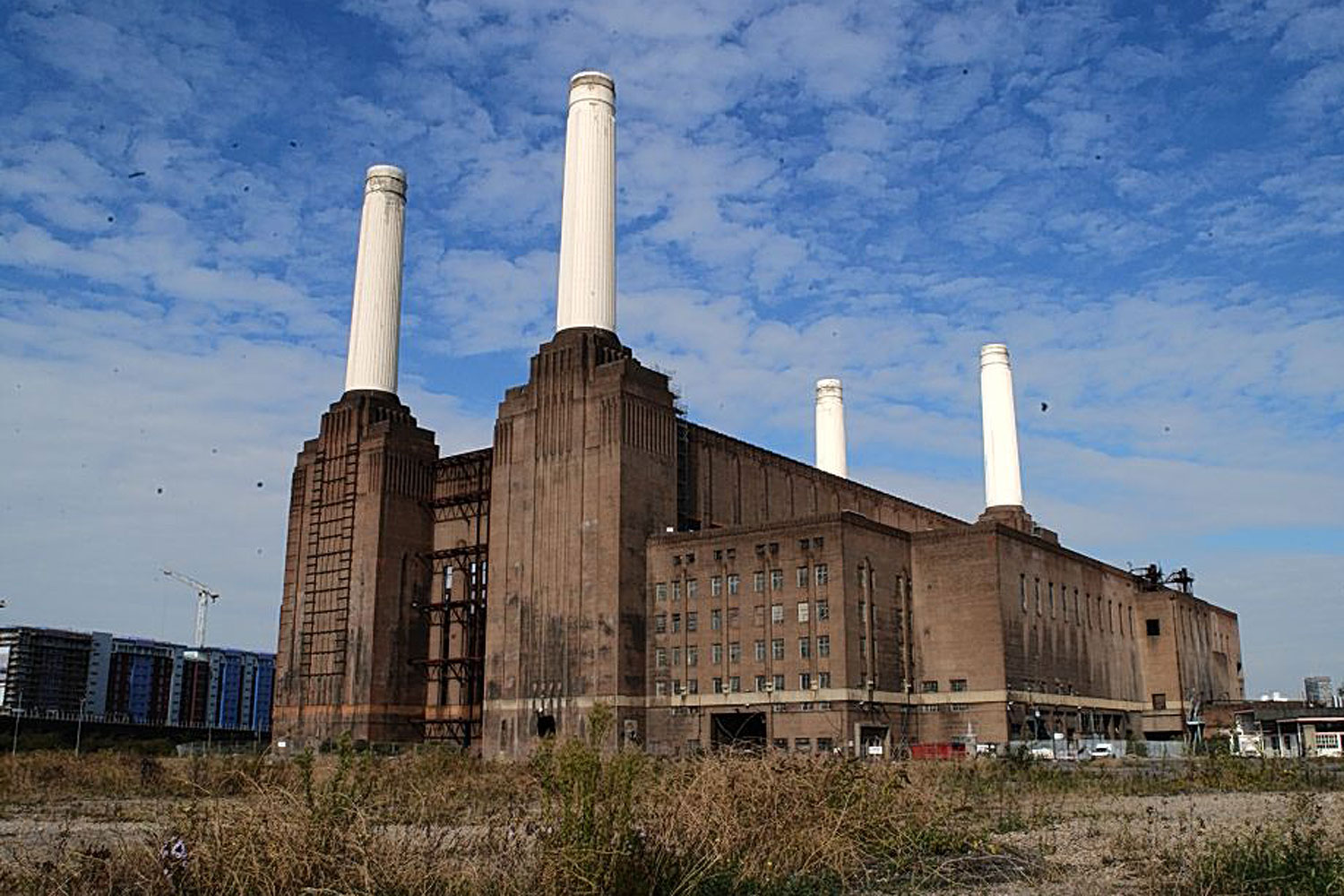 Battersea Power Station is one of Britain’s most famous buildings in one of London’s most prominent riverside locations. The building was designed by Sir Giles Gilbert Scott and J. Theo Halliday. It was a coal-fired power station with a steel girder frame and exterior brick cladding.

During the 1920s, small power stations built by private companies supplied electricity for individual industries with any surplus energy going to the public supply. This led to a chaotic situation and so parliament decreed that electricity generation should be a single, unified system under public ownership.

The London Power Company was formed in 1925 which followed with the construction of the first super power station producing 400,000 kilowatts in Battersea.

Construction of Station A began in 1929. Station B did not become operational in 1953. All four chimneys were completed by 1955 which made the power station the largest brick building in Europe.

In 1975, Station A was closed after 40 years in operation and in 1983, the power station ceased producing electricity altogether. The Electricity Board had planned to demolish the building and sell off the land to provide much needed revenue. However, this was not possible after Grade II listing was conferred on the building in 1980 in recognition of its Art Deco splendour.

A competition was held in 1983 to encourage developers to submit ideas for the site, retaining the power station superstructure. From the short-listed 10 schemes, the chosen idea for a theme park was selected. The site was purchased in 1987 and construction began on the theme park, however with rapidly escalating costs, work ceased in 1989 leaving the site semi-derelict.

Plans were re-submitted for offices, a hotel and shops to be constructed around the power station, which were subsequently granted. However, no work was undertaken and in 1993, the Bank of America purchased the site on behalf of a Hong Kong based development company.

In 2006, it was announced that Real Estate Opportunities had purchased the site and surrounding land but in 2011, their plans for the site collapsed.

In 2011 Wandsworth Council granted planning permission for a mixed use development, and in February 2012 the site was put up for sale on the open market. In September 2012, the Malaysian companies SP Setia and Sime Darby purchased the land for redevelopment.

Construction began in 2013 to transform the building into a new community of homes, workspaces, shops, restaurants and cultural venues along with 18 acres of public open space. The plans also include the restoration of the Power Station superstructure itself including restoration of the internal and external Art Deco structure, reconstruction of the chimneys and refurbishment of the historic cranes and jetty.

The plans include more than 800 homes of varying sizes with the development being undertaken in seven main phases. Phase I began in 2013 and is due to complete in 2016/17. 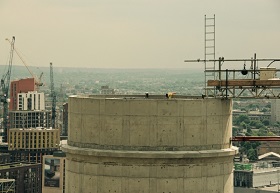 In June 2017, the building's four iconic chimneys were fully completed, having been rebuilt using the same techniques as the original construction.

The original chimneys, two of which were built in the 1930s and two in the 1950s, were removed because of safety concerns related to corrosion as a result of exposure to sulphur in the smoke generated from the boilers. Concern had been raised by that the famous chimneys would not be replaced, however, the Malaysian-owned consortium behind the redevelopment gave assurances that they considered the replacement and restoration of the chimneys essential.

The first pour was carried out in May 2015, and in the two years since, nearly 25,000 wheelbarrows (or 680 tonnes) of concrete was hand-poured to form the 51 m-tall chimneys.

A 'Jump Form' shuttering method was used, comprising steel and timber rings that were filled with concrete before being moved up and filled again. In total, the hoist travelled the equivalent of 21 miles during the whole process.

The chimneys will be repainted in their original colour, light ivory, with each requiring 375 litres of paint. This is expected to be completed over summer 2017.

Rather than being purely 'for show', the intention is for the north-east and south-west chimneys to be used as part of the new energy centre to power the development with water vapour released from their flues.

The project made controversial headlines and drew the criticism of Mayor of London Sadiq Khan, when it was announced that Wandsworth council had given approval to the developers to cut the provision of affordable flats by 40%.

The developers had cited various factors such as rising costs and Brexit-induced economic uncertainty, for the justification behind reducing the number of affordable properties to only 386 of the 4,239 total.

The developers had told the Conservative-led council that the luxury homes market had been disrupted, with the expectation of achieving less than half of the original returns. However, according to records released by the council, the developers remain on course to make profits of £1.8bn.

Khan accused the council of "waving through" the request, saying... “if these numbers are accurate, they seem to suggest that the council have had the wool pulled over their eyes – allowing themselves to be hoodwinked into cutting affordable housing while the developer’s profits remain strong."

On 1 August 2017, despite issuing a round of denials only a few days earlier, it was announced that Skanska would be replaced as main contractor by Mace.

A two-month handover will be undertaken as Mace, who were the initial favourites to secure a successful bid, take charge of the more than £1 billion Phase Two contract.

“Battersea Power Station Development Company (BPSDC) and Skanska UK have mutually agreed to end their association on Phase 2 of the development, the Power Station, this autumn.

“Following the initial phase, it is now considered that an alternative construction management procurement route would better suit the next and continuing phase of the works."

Retrieved from "https://www.designingbuildings.co.uk/wiki/Battersea_power_station"
Create an article