Careful selection of structural geometries, structural elements sizes, orientations and connection designs has created an elegant and refined simplicity to the design; appropriate for an economic, partially temporary structure.

Key to the success of the rapid delivery of the stadium in just 34 months was teamworking within an Integrated Design and Construcion Team. This key message was reinforced through the successful delivery of the complex roof, with its significant engineering and construction challenges, which involved close collaboration between designers and builders.

[edit] Engineering for the Seating Bowl

The seating bowl provides 25,000 permanent seats in a lower tier with a temporary structure for 55,000 seats in upper and middle tiers. Concrete was developed as the conventional material for the lower bowl offering a durable permanent feel. 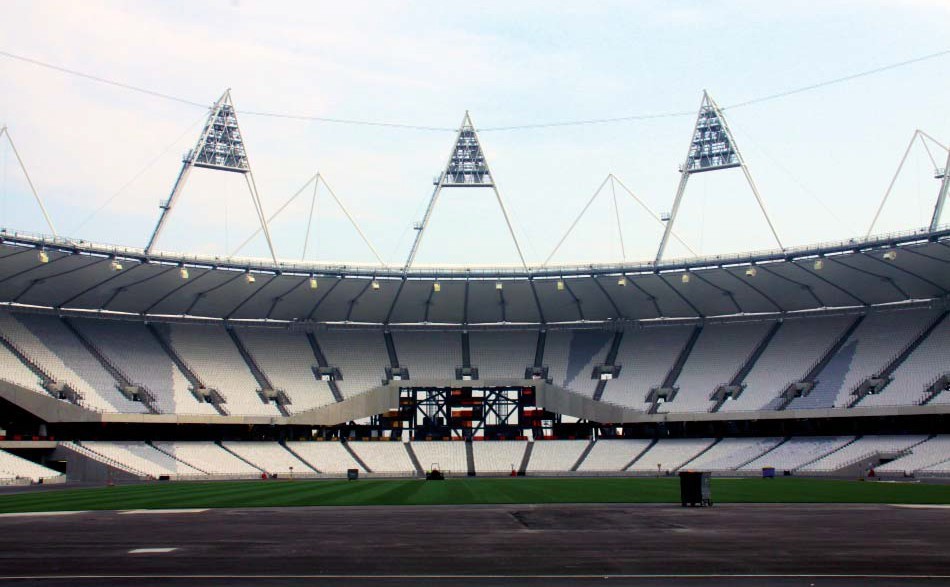 The structures above podium level are demountable, constructed using a bespoke lightweight steel solution with bolted connections which could be removed after completion of the Games.

The perimeter section and columns of the Stadium are steeply inclined to create the now recognisable, distinct aesthetic of the stadium. But this had a functional purpose too as, together with a carefully optimised seating tier and bowl form, it helped provide a minimal volume and building footprint to allow clear circulation around the stadium perimeter. Bespoke dynamic analysis helped optimise the design.

An effective solution of trussed rakers responds to the loading and spatial arrangement of the architecture. The team created a visual organisation with flange faces of raker chords and lacers and circumferential bracing elements all aligned and facing ‘down’ and ‘out’. Care and attention on connection detailing created a family of solutions where, if, loads and erection methodology permitted, end plates were used. The philosophy was to define, design and build an economic organised elegance. The stadium sections were synthesised into a family of similar sections with a degree of repetition and legible organisation around the seating bowl.

A fire engineering approach was adopted which, from first principles, substantially reduced the amount of fire protection, allowing the structure to be simple, unadorned and economic.

The twisted wrap enclosure unifies the building into a coherent whole. The fabric panels are 2.5m wide and 25m tall. The structural engineering necessary to support a 25m fabric 'banner' is not an everyday proposal. The engineering solution is for fabric to span horizontally onto vertical inclined stressed cables. The simple concept belies the complexity of achieving the solution practically, economically and assuring the fabric stability under wind loading.

The podium structures were conventional, but the engineers and main contractor worked closely in 3D with the specialist reinforcement supplier to develop a reinforcement solution allowing pre-welded, pre-fixed cages for slabs, beams and columns.

Strengthened soft-earth embankments were used instead of hard engineering structural embankment edges as part of the aspiration to make London 2012 a green games with continuous pathways for biodiversity, linking into the legacy parkland.

The team carefully considered the need for a roof for such a temporary event. The engineers undertook a special study of wind speeds at track and field level for the athletes. This involved the development of a 3D virtual wind tunnel to evaluate wind performance against a number of parameters. The results showed that a partial covering was important to attenuate wind speeds at track level.

The key philosophical drivers for the roof design were to produce a lightweight, elegant roof with minimum materials appropriate for a temporary venue. Designing from first principles led to considering the roof as an environmental control against wind but not a rain or sun shelter.

Additionally, there was the need to support to the sports lights, a compression ring design for ceremonies loading, the design of the fabric membrane and the connection regime for the steelwork. The sports lights needed to enable high definition vision to television viewers all around the globe. They are designed to ensure the best lighting angles and to avoid dazzling spectators, photographers and competitors.

The structural design of the roof is a primary cable net to meet the design drivers and also to meet overall goals of a lightweight, demountable, transformable roof. The structure is an example of a 'bicycle wheel' design.

The roof was designed with the minimal optimised numbers of elements by employing straight cables with flattish fabric. PVC fabric was chosen as an economic covering for a large area and offered an appropriate aesthetic for a temporary summer event.

The lighting towers are major pieces of structure. The top of the towers are 30m above the tension ring and 70m above the field of play. Global stability of the lighting towers is provided by two sets of cables; circumferential cables and radial cables which are pre-stressed against each other and provide stiff restraint in both the radial and circumferential direction. The aesthetic of the towers has resulted from care and attention to the coordination of the architecture, structural and services engineering. 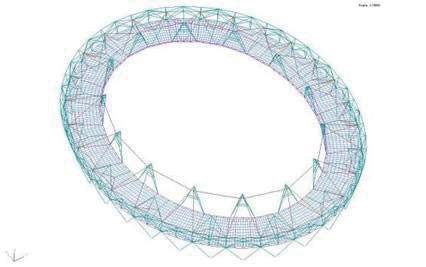 A key feature of the engineering design is flat fabric with limited curvatures to minimise the costs and uses of secondary systems, thus enabling very effective, economic roofing.

The erection sequence was developed by the engineers. The cable net design was conceived with limited requirements for temporary works, but some construction installations into the permanent works of the bowl were required. The level of detail and preparation of the scheme meant that all the temporary works aspects could be pre-detailed, managed and coordinated into the primary bowl structure as the bowl was being built.

The cables in the final condition are all prestressed tightly together and this state requires an erection jacking process. This involved the simultaneous operation of jacks carried out to a tightly prescribed routine that had been developed from simulation in the analysis model. The jacking strands worked at different speeds in order to raise the net correctly and evenly. The complex geometry meant that the tension ring and gantry took a temporarily twisted form and all details had been designed with complex flexibilities to accommodate large defections and rotations. Analysis was by Watson Steel checked by Buro Happold.

The erection of the lighting towers was one of the most technical engineering and construction challenges of the whole project. The complexity arose from the large weight, the large reach required of the cranes and the fact that the lighting towers required a distinct temporary stability system before their permanent stability system was finalised. Analysis was by Watson Steel checked by Buro Happold.

The team challenged in-use carbon emissions and embodied carbon via high-level conceptual and philosophical decisions and via detailed value engineering. By far the most significant decisions influencing embodied carbon are those associated with the designers’ acknowledgement to “embrace the temporary” enabling a compact design and lightweight construction. Careful interrogation of the required roof coverage led to an optimised, lightweight, low carbon, minimum area solution.

Cut was minimised through careful profiling of the site. Contaminated soil was treated in a ‘Soil Hospital’ for reuse on the Olympic Park. Large diameter tubes of the roof were reused from material from a gas pipeline project, which provided a carbon saving. 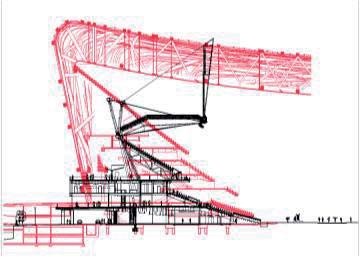 It is hoped that the design is seen to successfully realise a set of unusual and challenging philosophies. These include a belief in good structural engineering design and innovative solutions enabling a natural iconic elegance formed by the integration architecture, engineering and construction. 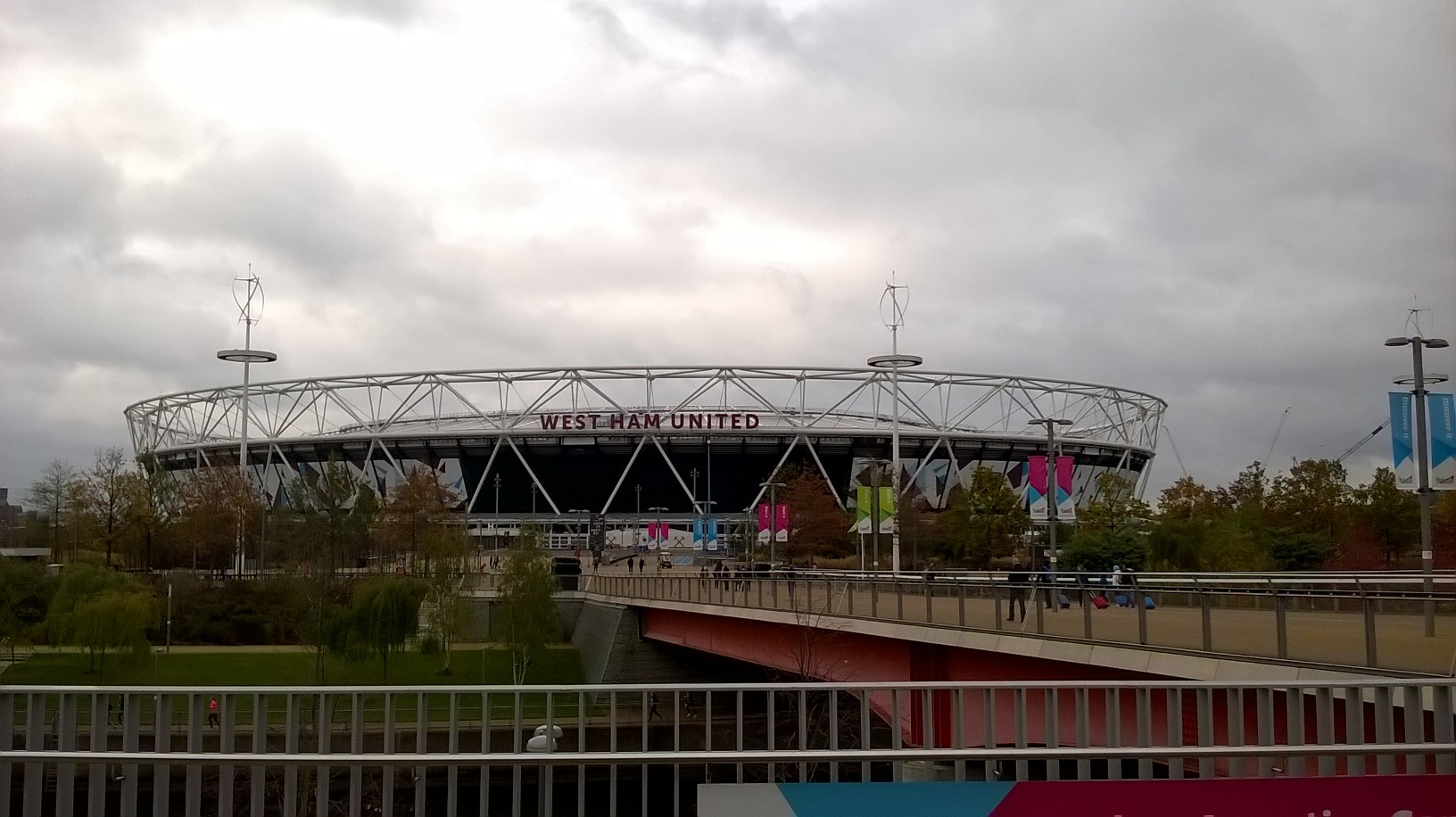