The Stratford Town Centre Link is a landmark structure forming the gateway to the Stratford City development in East London. Conceived as an “urban piazza”, its location makes it an important link for the local community as well as a significant route into the Olympic Park for the 2012 Games. It was completed on 12th September 2011. 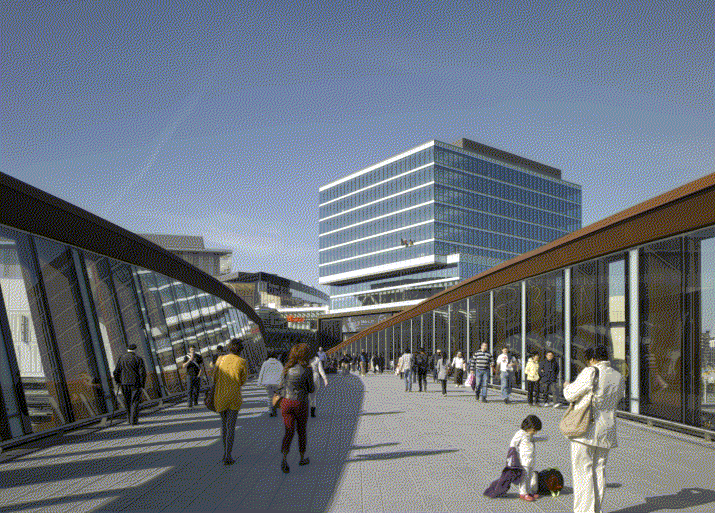 The bridge crosses eleven railway lines including Network Rail and London Underground assets as well as the platforms of Stratford Regional Station and a highway. Its high-profile location demanded utmost attention to safety, quality and inventiveness in delivery.

The project is notable for a number of reasons:

The development of the bridge concept was a close collaboration between the client, architect and engineer. The engineering constraints included geometric clearances, limited positions for supports and the need to design for minimal long-term maintenance. Architecturally the bridge needed a strong presence whilst providing an open yet secure environment above the railway. From a construction point of view, disruption to the railway needed to be minimised.

The design comprises a ladder beam arrangement with steel side trusses fabricated entirely from weathering steel forming two equal spans of 65m. The bridge width, dictated by crowd flows of up to 80,000 people per hour during the Games, is 12m. A full-height glazed façade is provided along each side and this open structure without diagonals provides suitable edge protection against falling objects without detriment to the experience of the user. A Vierendeel truss form was selected because it is more easily integrated with a glazed cladding system, avoids the visual interference of diagonals and complements the rectilinear language of the neighbouring buildings.

The bridge is subtlety curved in plan. The trusses vary gradually in height from 4.5m at the ends to 6.5m at the centre pier and the outermost truss develops a deliberate lean of up to 15 degrees. These geometric devices achieve an even greater sense of space and transparency. The constantly changing geometry combines with the plan curve to give the crossing a dynamism and drama that is reinforced by the cladding system. 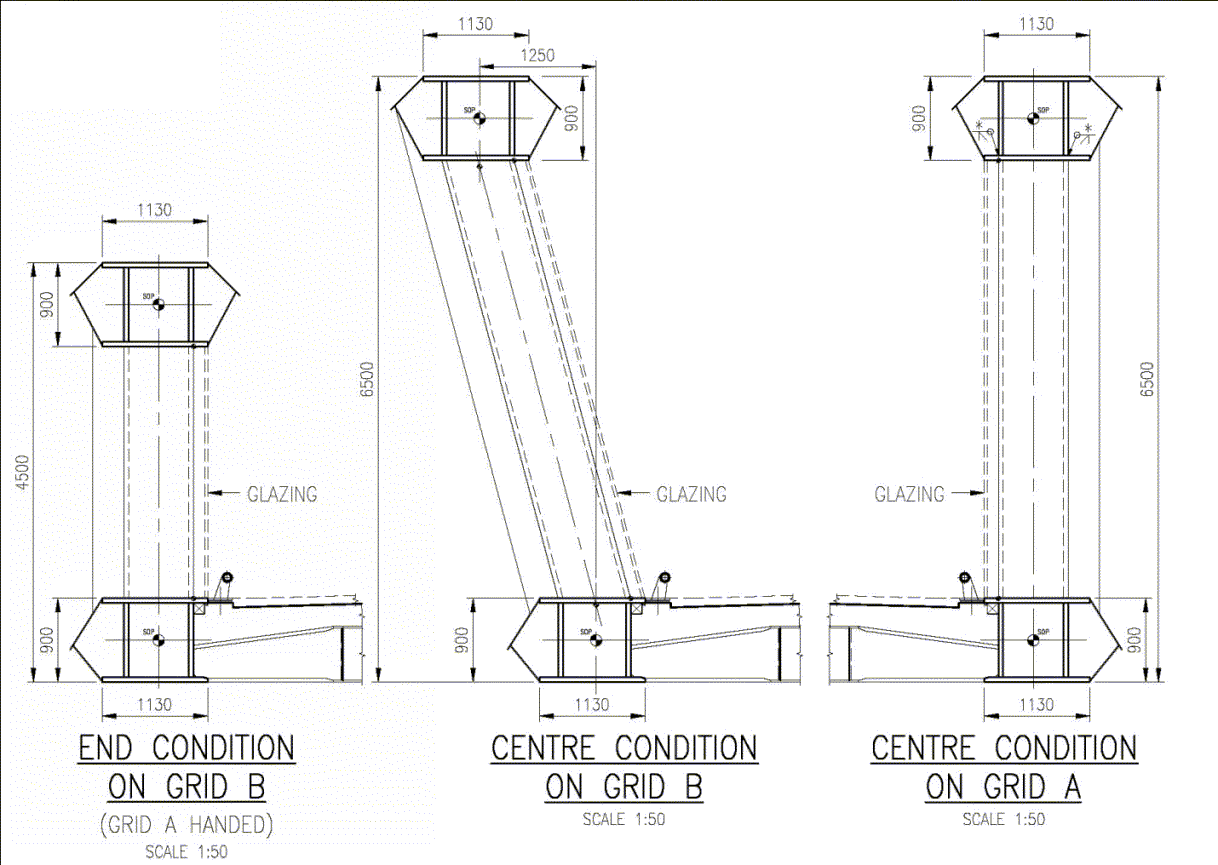 The lean of the outer truss has structural as well as aesthetic benefits as the top boom of the truss, which is in tension over much of its length, becomes straighter and therefore more efficient. The outer profile of the vertical and horizontal members is shaped to create sharp edges and chamfered planes which are defined by light and shadow to accentuate the form and reduce the visual mass in elevation.

The selected method of installation was an incremental launch procedure which required the design of significant temporary works and associated foundations.

The decision to combine the use of weathering steel with a high-quality glazed façade gives the structure a sophisticated urban appearance that harmonises with its environment yet makes it unique among architectural footbridges. At 130m long, it is thought to be the largest single footbridge structure fabricated from weathering steel plate.

The central pier was constructed in the footprint of an existing signal box with very restricted access for plant and materials. The design solution was an innovative minipile design incorporating tubular steel sections as permanent casing and reinforcement.

The incremental launch procedure had to be undertaken around a curved alignment with special constraints above and beside the bridge. The temporary works were carefully designed with input from a specialist contractor to enable the launch to be carried out in three weekend operations.

Care was taken in the bridge detailing in order to produce a design whose aesthetic qualities are intrinsic to the structure. The use of weathering steel offers great potential benefits in terms of durability, however it requires skilful detailing. The design team conducted its own tests on the weathering process and visited precedents. Best practice in relation to the use of this material was researched prior to detailed design and as a result the truss chords were developed with in-built drip details and chamfer plates to prevent pigeon roosting.

It was recognised that a high standard of workmanship and dimensional control was essential to the successful delivery of the project. For this reason, intensive workshops were held within the design and construction team to carefully plan the execution of the fabrication and erection of the bridge and its finishes. For example, it was vital that the launch surface of the underside of the trusses was perfectly flat to ensure a smooth installation. In the event, remarkable standards were achieved which are a tribute to the expertise and ingenuity of the individuals involved.

Adherence to programme for the bridge construction was critical to the adjacent retail development due to need to occupy part of the site for assembly. The design of the bridge was also significantly affected by the chosen method of installation and the engineer was therefore novated to the contractor for the detailed design.

The bridge sections were prefabricated off site and delivered in transportable sections for assembly by welding adjacent to the bridge’s final position. Custom-designed temporary works were required to maintain the geometric relationship between adjacent units.


A launching nose and tail frame were installed and the first 48m section of the bridge was slid into position using strand jacks to pull the rear of the assembly forward and low-friction skates to support the bottom chords of the trusses. This process was then repeated for the second and third sections of the bridge. The individual launch stages were separated by several weeks to allow for intermediate assembly. 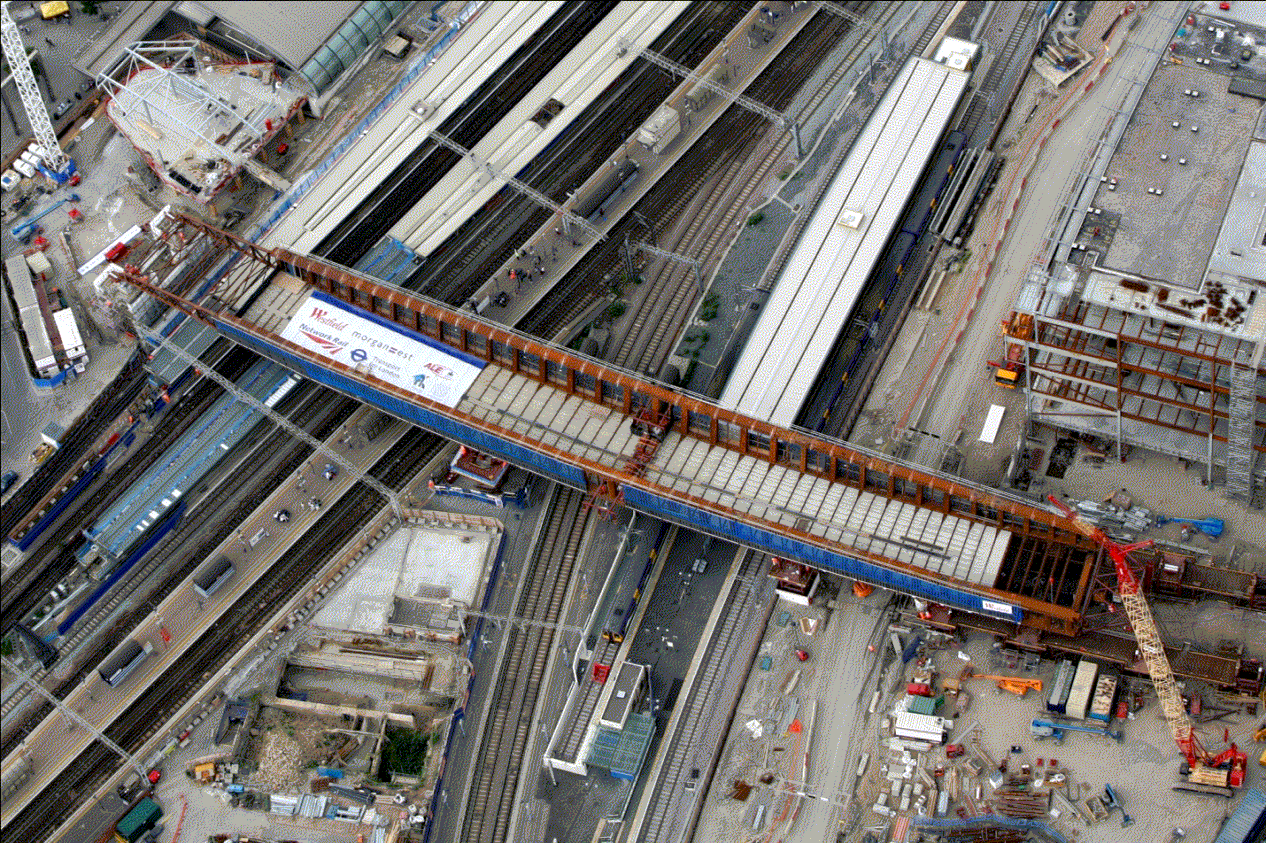 By the third bridge launch, the railway authorities had developed sufficient confidence in the project team’s competency and the careful planning of the operation to permit work to be carried out without a railway possession or station closure, thus avoiding disruption and inconvenience to passengers. This is understood to be a first.

The bridge’s location above a busy railway and station meant that health and safety considerations were paramount. Its design was profoundly influenced by the need to ensure the safety and practicality of the method of construction.

Permanent formwork soffit panels and temporary side screens were deployed to provide a secure working environment. Showing considerable foresight, the client commissioned a computer animation to clearly communicate the complex sequencing to the approval authorities and operatives. 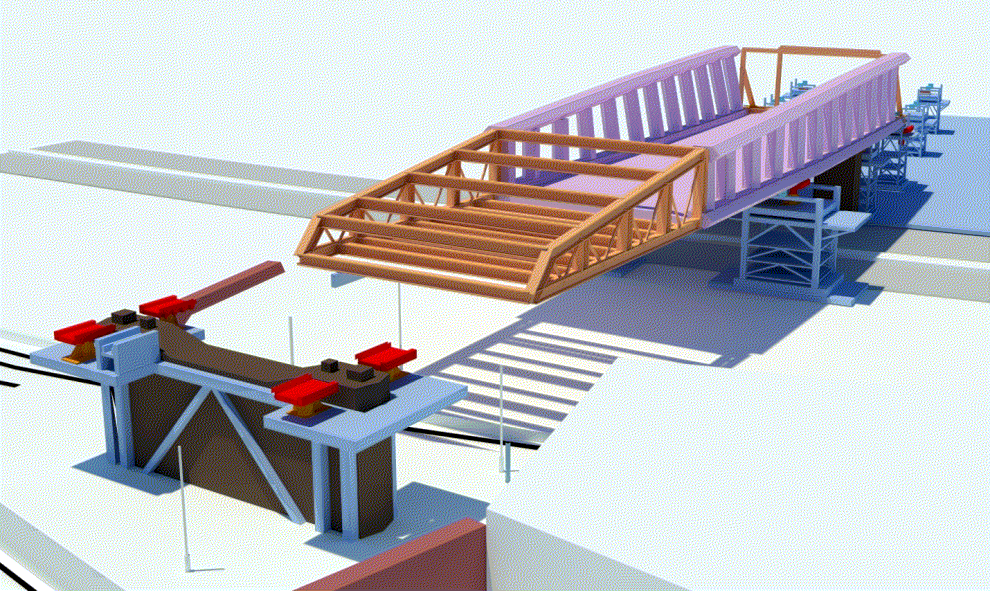 Safety of the bridge in service has also been an important issue:

The bridge materials were selected to maximise durability and minimise maintenance, which is an important consideration given its location above a busy railway. Consequently life-cycle costs have been minimised. The bridge design was also driven by the desire to minimise construction time and impact. The bridge brings significant local benefits in terms of connectivity.

The project has required close co-operation between the client, designers, main contractor and steel fabricator to deliver a complex structure within a tight timescale. It is a tribute to the team members that the project was completed on time and within budget.