A cable net structure is an example of a tensile structure, i.e. a structure that is stabilised by tension rather than compression. For example, a piece of fabric pulled in opposite directions. For more information see: Tensile structures.

Cable nets were developed and popularised as a minimalist structural system in the 1960s and 70s by Frei Otto, with a new permanence was heralded by the plexi glass clad cable net of the 1972 Munich Olympic Stadium. For more information see: Frei Otto.

The architect Helmut Jahn is often credited with using the system in the most innovative application, when designing the Kempinski Hotel, Munich, in the early-1990s. Jahn adopted the cable net system, creating a structural form of pre-tensioned cables to provide support for a sheer glass curtain wall. 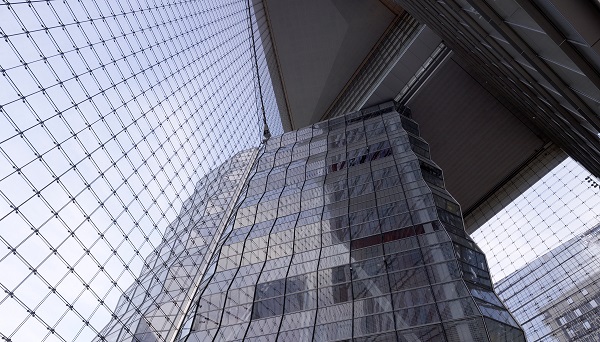 To increase height and load capabilities, horizontal cables can be combined with vertical cable arrangements. By doing so, system designs can be developed for double curvature walls as well as flat walls. For more information see: Anticlastic and Synclastic.

Cable nets are capable of being very simplistic structures. The clean aesthetic and large-spanning potential can be integrated with adjacent structures to reduce the need for conventional supports.

Typically, the cables are locked together at their intersections using a clamping component which may also fix any cladding to the net. Complex hydraulic jacking processes may then be used to apply the cable prestress.

Retrieved from "https://www.designingbuildings.co.uk/wiki/Cable_net_structure"
Create an article