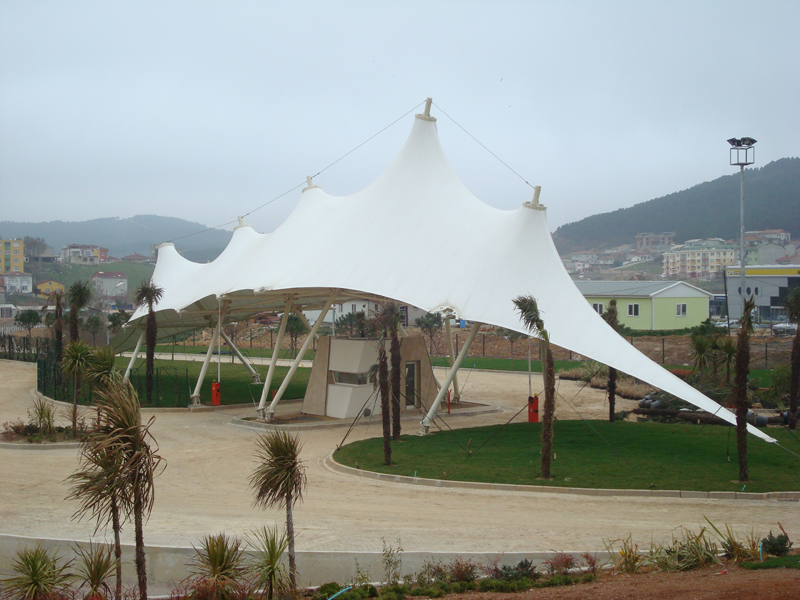 Conventional structures tend to be stabilised by the action of gravity on their mass holding them in compression.

A tensile structure is a structure that is stabilised by tension rather than compression. For example, a piece of fabric pulled in opposite directions.

In practice, structures tend to carry both tension and compression, and it is the degree to which a structure is intentionally tensioned to stabilise it that determines whether it is considered a tensile structure.

Tensioning, is usually achieved with wire or cable, opposed by compression elements such as masts, and held in place by foundations, ring beams, ground anchors and so on. Tensioning can also be achieved through inflation.

Structures with tension elements include:

Three-dimensional tensile structures typically form doubly-curved shapes that are either anticlastic or synclastic.

Doubly-curved surfaces can be tensioned without distorting their form, as the opposing curvatures balance each other at every point on the surface. Tensioning the fabric reduces its elasticity so that it will distort less when subsequently loaded, such as under wind load or snow load. In addition, the geometry of the curvature itself means that any extension of the fabric under load results in a relatively smaller deflection than would be apparent in a flatter, or less curved fabric.

Typically, tensile structures use less material than conventional compression structures and, as a result, are lighter and can span larger distances.