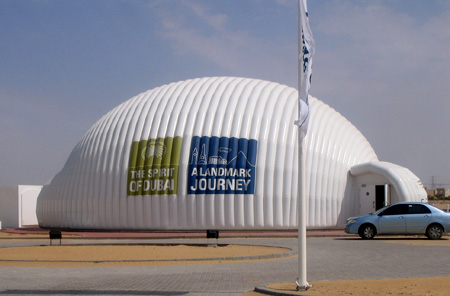 Inflatable buildings are constructed using two layers of membrane connected together to form inflatable 'cushions'. Membranes are usually less than 1 mm thick, and air is used to pressurise the cavity between them to form a 'rigid', structurally stable element, capable of spanning large distances.

Inflatable structures (or inflatables) can also be used to create specific components such as; escape slides, mattresses, swimming and paddling pools, play slides, bouncy castles, and so on.

Legal requirements apply to the supply, hire and use of inflatable play equipment for commercial purposes, but not to private, domestic buyers and users. Inflatables can be dangerous in terms of user injuries as well as being unsuitable in high winds if inadequately secured.

Inflatables should be checked before buying or hiring for an event to ensure they comply with BS EN 14960. A label should provide information about when the inflatable was made, how many people can use it and their maximum heights. Once the inflatable is fully inflated, it should be inspected prior to use to check that the site is suitable, that the anchorages are secure, and the internal air pressure provides a firm footing.

Retrieved from "https://www.designingbuildings.co.uk/wiki/Inflatable_building"
Create an article