Fabric structures are a form of tensile structure in which a membrane is 'stretched' to form a structurally stable surface. Typically, the membrane is formed by a fabric, consisting of a woven base cloth, coated on both sides with an impermeable polymer, and sometimes a durable topcoat, held in position by tension forces imposed by a structural framework, a cabling system, internal air pressure or a combination.

Typically, fabric structures are formed using PTFE coated glass, or PVC coated polyester, although there is an increasingly wide range of other materials available. For more information see: The development of structural membranes.

The fabric itself it generally very thin, approximately 1mm thick. It has very little compressive strength, but very high tensile strength. Woven glass fabrics are stronger in tension than steel. Different types of membrane are available depending on the use, longevity and tensile strength required.

Typical tensile strengths are set out below:

Individual pieces of fabric may be welded, heat sealed, glued or sewn together to form larger panels. Steel cables may be attached to the perimeter of the panels, to pull them into their desired positions.

Fabric structures are generally tensioned and given their structural stability by their doubly-curved shape, which may be anticlastic or synclastic.

Anticlastic shapes tend to be formed by steel cables and masts or arches pulling them into tension. Whilst the fabric itself may be very thin, the tensile force imposed on it to ensure it remains stable under load can be high, and so the supporting structure required to transfer loads to the foundations can be significant.

A synclastic surface (or a dome shape), is a surface in which the two axes of the surface curve in the same direction, that is the centres or curvature are on the same side of the surface.

Synclastic surfaces are typically created by inflation (sometimes referred to as air-supported structures). Air pressure within the enclosure maintains the form of the surface when it is tensioned. The is similar to blowing up a balloon, but the pressure is very low so that it is generally not noticeable to occupants.

[edit] The effect of curvature

Doubly-curved surfaces can be tensioned without distorting their form, as the opposing curvatures balance each other at every point on the surface. Tensioning the fabric reduces its elasticity so that it will distort less when subsequently loaded, such as under wind load or snow load.

In addition, the geometry of the curvature itself means that any extension of the fabric under load results in a relatively smaller deflection than would be apparent in a flatter, or less curved fabric.

A range of techniques can be used to design and analyse the stressed skin of fabric structures and to determine the optimum structural shape. 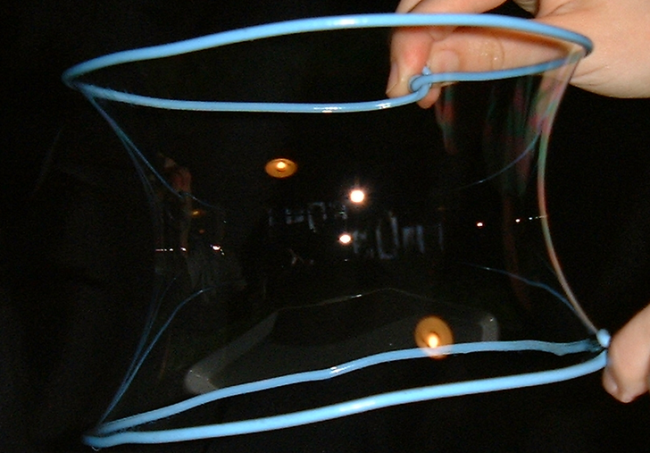 It is only relatively recently that it has been possible to model the non-linear, dynamic behaviour of architectural fabrics (in which a change in one part affects all other parts and vice versa) using specialist form-finding software. This allows designers to vary the elements, boundary conditions and geometry of the design and rapidly determine the most efficient structural solution.

This software can also be used to generate patterns for automatically cutting the fabric panels to create the form required.

Retrieved from "https://www.designingbuildings.co.uk/wiki/The_structural_behaviour_of_architectural_fabric_structures"
Create an article