Ahead of ICE’s Global Engineering Congress in London in October 2018, they explore the five-fold multiplier effect that investment in water infrastructure can have on society. 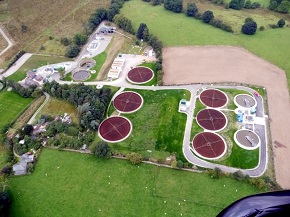 The multiplier effect refers to the increase in the socio-economic benefits for society that arise from any investment - in this instance in water and sanitisation. Water is the critical enabler for all of the UN’s Sustainable Development Goals, which means that investment in a wide variety of water infrastructure globally has a disproportionately positive effect - often quoted as a 5-fold multiplier effect.

Although the concept of ‘integrated water resources management’ (IWRM) was developed more than 20 years ago it is only since 2015, with agreement on the 2030 Agenda for Sustainable Development, that all heads of state worldwide have agreed that their countries’ water management plans should be of the integrated type.

This is an extremely encouraging achievement for which all parties involved should be congratulated. This global acknowledgement reflects the increasing recognition of integrated water management, the role of water as the critical enabler of all other domains of development, and the potential five-fold multiplier effect.

So, now that we’re finally all ‘singing from the same hymn sheet’, what do we actually need to do? And given that we’re seriously off-track with some of the global targets for water and sanitation, how can we be far more effective in future?

[edit] Recognition of the scale of the challenge – and the opportunity

We need to understand where we are right now so that we can all recognise the scale of the challenge, and the resulting opportunity. All stakeholders, including civil society and investors, could be really mobilised if they understood just how great the need and opportunity is. This message needs to be concise and compelling – it is simply not the case that ‘more report words and pages’ will result in more policy impact.

This is also the entry point for the SDG 6 Synthesis Report, which is the only report from the UN system that informs the High-Level Political Forum for Sustainable Development (HLPF) during its meeting in New York, in July 2018, about the state of affairs of the Water and Sanitation Goal (SDG 6) in an integrated fashion.

[edit] Reasons for the five-fold multiplier

There are both positive and negative reasons for the scale of the challenge and the resulting opportunity. The positive reasons derive from the fact that water is essential for all human activities and for societal economic development. Evidence suggests that 3 out of 4 jobs are directly or indirectly dependent on water security.

Water is not only essential for agriculture (responsible for 70% of global freshwater withdrawals - more than 90 % in some agriculture-based economies), but also for energy and industry. 4% of all electricity produced is used by the water sector and total electricity consumption is increasing. Water is truly vital, and sometimes small investment can make a big difference.

The negative reasons for the five-fold multiplier effect derive from the way in which the lack or lesser quality of water infrastructure for poorer people (especially women and girls, rural areas compared to cities, migrants), exacerbates the difficulties those groups already face. A few examples will suffice:

However, when these shockingly high levels of need are combined with the recognition of the essential nature of water for human activity, effective action on the delivery of even basic services really does produce the five-fold multiplier effect. We need to get everyone, including investors and civil society, on board with this vision.

[edit] Links between different scales and different types of actors

Cynics may point out that they’ve heard all this before. So why might we be able to make a real difference now? There are two reasons:

Firstly, investor awareness of the different locations of global economic activity has shifted. When China starts investing systematically in infrastructure in sub-Saharan Africa, other investors start to wonder what opportunities they are missing.

Secondly, digital technologies provide potentially cheap ways to access, distribute and analyse local data about water infrastructure performance. However, these technologies will only be transformative if people actually using water can access and trust that data and the ways it is used. The widespread distribution of mobile phones throughout many developing economies starts to make this a real possibility.

Taken together, these factors could mean that we are now able to start solving the critical overlapping problems of water governance, the need for multi-stakeholder partnerships and the need for cheap, accessible and local data and analysis about the performance of water infrastructure – even or especially in transboundary river catchments.

I’m really looking forward to the response to the launch of the report in New York in July. Will investors, innovators and civil society step up to the opportunity?

This article was originally published here by ICE on 20 June 2018. It was written by Professor Stefan Uhlenbrook, Co-ordinator of UN’s SDG6 2018 Synthesis Report on Water and Sanitation.

Retrieved from "https://www.designingbuildings.co.uk/wiki/Water_investment"
Create an article