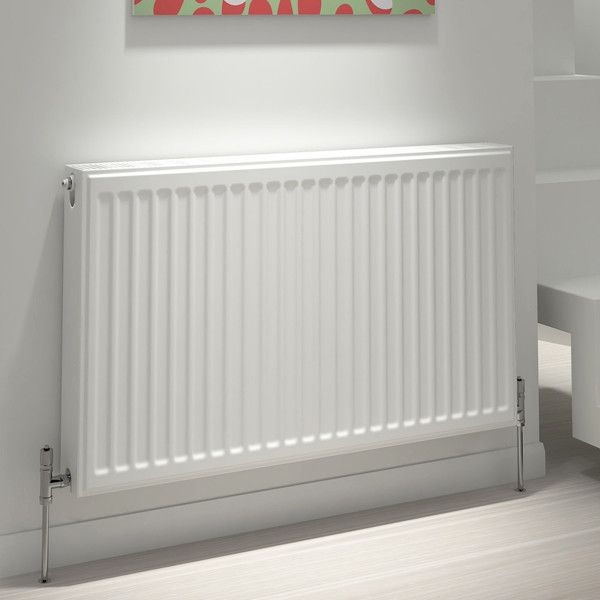 Radiators are heat exchanging devices and are one of the oldest and most effective ways of heating buildings. Typically, they consist of hollow metal panels through which hot water is pumped. Convector fins may be welded to the panels to increase their effective surface area, allowing more air to come into contact with the metal.

According to British Standards, radiators should be placed on external walls, wherever possible under windows. This is because mounting is easier on external walls and these are usually the coldest parts of a room.

Radiators use the heat from hot water or sometimes steam to warm the surrounding air. The advantage of using steam is that it can flow through pipes under its own pressure without needing pumps. This is useful for large and tall buildings, however, steam is less efficient due to the higher temperatures at which steam systems operate.

Water hammer is a banging sound that can be made by steam pipes and radiators. It is due to some of the steam condensing into water in a horizontal section of the steam piping and pushing the water at high velocity into a pipe fitting.

These can be either single or double panels without convector fins, and now largely outdated. The panel refers to the long metal containers that run parallel to the wall. The longer the panel, the larger the heat-emitting surface area, so bigger radiators will emit more heat. A double panel radiator will emit more heat than a single panel radiator of the same length.

These are similar to panel radiators but have convector fins welded to them. The three different types are:

Round top radiators allow the convector fins to be seen, whereas compact radiators include a grill across the top of the panels to obscure the view of the fins (see top image). 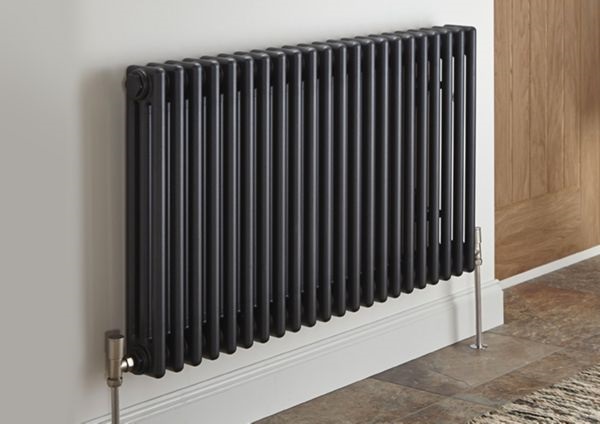 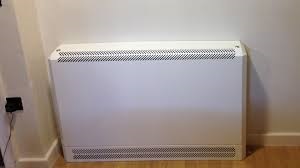 An LST radiator has an efficient internal heat emitter in a robust steel enclosure to ensure safety and concealment of pipework and valves. This type of radiator is often found in places where safety concerns are important, such as hospitals, nurseries, schools, care homes, and so on. They do not have sharp corners and maintain a low, safe-to-touch surface temperature, while at the same time delivering the required heat output.

This type of radiator is placed inside a skirting board, saving the wall space. Hot water is piped through the system from the central heating system.

Bleeding a radiator involves venting air that can build up over time, preventing proper operation of the radiator.

Radiators should be bled regularly to ensure the efficiency of the central heating system. It is possible to check whether bleeding is necessary by checking for cool spots, especially near the top of the radiator. Bleeding can be done using a bleeding key or flat-heated screwdriver to open a valve at one end of the radiator. This allows the release of the trapped air until liquid starts to escape, at which point the valve should be quickly closed.

Bleeding radiators may reduce the pressure of the central heating system to below its recommended level. Typically, a filling loop within the boiler can be used to re-pressurise the system.

NB New regulations mean that from June 2022, heating installers are required to install thermostatic room controls when replacing a boiler.