Griffith Observatory is an observatory facility on the south-facing hillside of Mount Hollywood, in Los Angeles, California. With its unique setting, Art Deco architecture, and commanding views of the Los Angeles Basin, the observatory is one of the most recognisable and popular landmarks in California.

The observatory was conceived by Griffith J. Griffith, who donated an area of land to the City of Los Angeles in 1896. As Griffith became something of a notorious figure – he served time in jail for murdering his wife – the City were reluctant to develop the land during his lifetime. In his will, Griffith left funds to build an observatory, exhibition hall and planetarium on the donated land, with the intention of making the science of astronomy accessible to the wider public.

Since opening in 1935 – only the third observatory with a planetarium in the world - the observatory has become one of Los Angeles’ most popular tourist attractions. 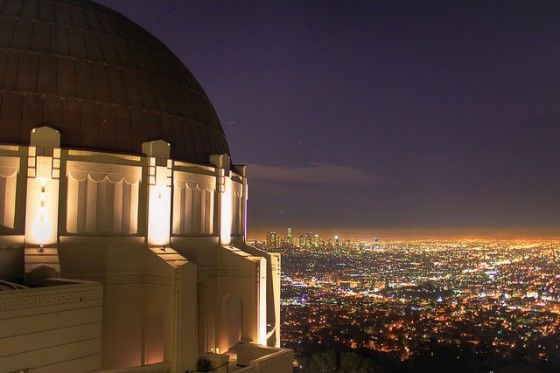 The observatory design was based on plans created by the astronomer Russell Porter, who envisaged a domed facility with rooftop views.

In 1931, architects John C. Austin and Frederick Ashley were appointed to the project, with Porter retained as a consultant. The Art Deco design was a combination of grand and monument styles, part Roman temple, part Moorish mosque or mausoleum.

Construction began in 1933, as a New Deal Works Progress Administration (WPA) project, with the Depression meaning that building materials and labour were both cheap and readily available. The architects ensured that they specified materials that were obtainable in Los Angeles or the vicinity, to help local industry and employment.

In March 1933, as construction plans were being finalised, a major earthquake in the Long Beach area led to the abandoning of the planned terra cotta exterior in favour of stronger and thicker concrete walls. The walls were then painted ‘warm white’ with decorative iron-grill windows.

The domes consist of copper panels, which have over the years oxidised to a bright green colour. A walkway around the planetarium is crowned with concrete arches, influenced by Art Deco as well as Greek Revival styles.

In 2002, the observatory was closed for major renovation and expansion works, before reopening in 2006. The Art Deco exterior was retained unchanged, but the planetarium dome was replaced and a full restoration completed at a cost of $93 million. The observatory was expanded below ground, with new exhibits, a café, gift shop and theatre space.

Due to its prominent location near the Hollywood sign, the observatory has made numerous film and TV appearances. The most iconic of these is the 1955 film ‘Rebel Without a Cause’. A bust of the film’s star James Dean was subsequently placed in the west side of the grounds.

Retrieved from "https://www.designingbuildings.co.uk/wiki/Griffith_Observatory,_LA"
Create an article