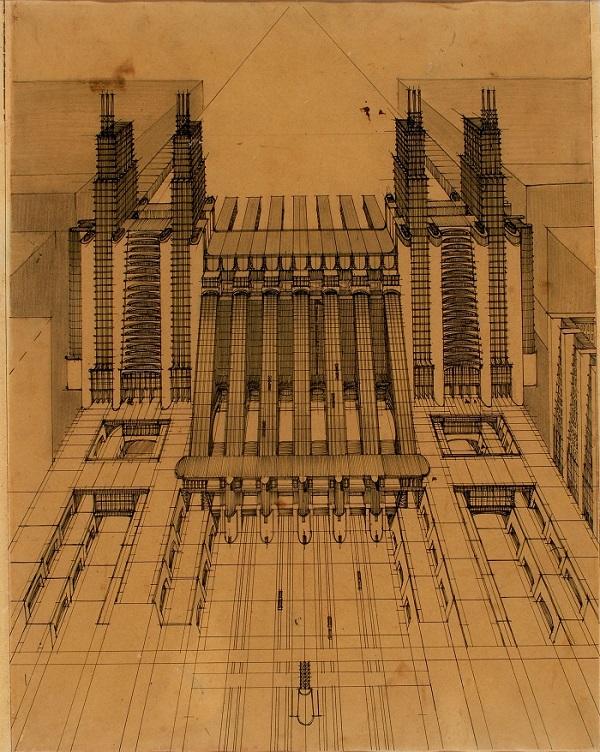 Futurist architecture emerged in the early-20th century in Italy. It was motivated by anti-historicism and characterised by long horizontal lines and streamlined forms suggesting speed, dynamism, movement and urgency.

Architects became involved in the artistic movement known as ‘futurism’ which was founded by the poet Filippo Tommaso Marinetti with his ‘Manifesto of Futurism’ (1909), along with other creatives such as writers, musicians, artists, and so on. They all were attracted to, and interested in, the new ‘cult of the machine age’ and the technological changes of the new century.

Utopian visions for futurist cities (see top image) were proposed by architects Mario Chiattone and Antonio Sant’Elia, which emphasised the use of new materials and industrial methods, as well as new developments such as elevators and structural steel components.

Futurist architecture came to be characterised by the notion of movement and flow, with sharp edges, strange angles, triangles, domes, and so on. In many respects, the more defined styles of Art Deco and Art Moderne adopted Futurist ideas of design and form, which were thought to be limitless in scope and scale.

Futurism went out of fashion following WWII, but emerged again in a reinterpreted form with the popularity of futuristic comic books and the arrival of the Space Age. This became known as ‘Googie’ architecture, which first appeared in Southern California during the late-1940s, influenced by the futurist designs of car culture, jet travel and the Atomic Age.

Towards the end of the 20th century/early-21st century, it also informed neo-futurism, which evolved out of high-tech architecture, developing many of the same themes and ideas. It is seen as a departure from the more sceptical and referential style of postmodernism, and more of an idealistic approach to the future.

Retrieved from "https://www.designingbuildings.co.uk/wiki/Futurist_architecture"
Create an article