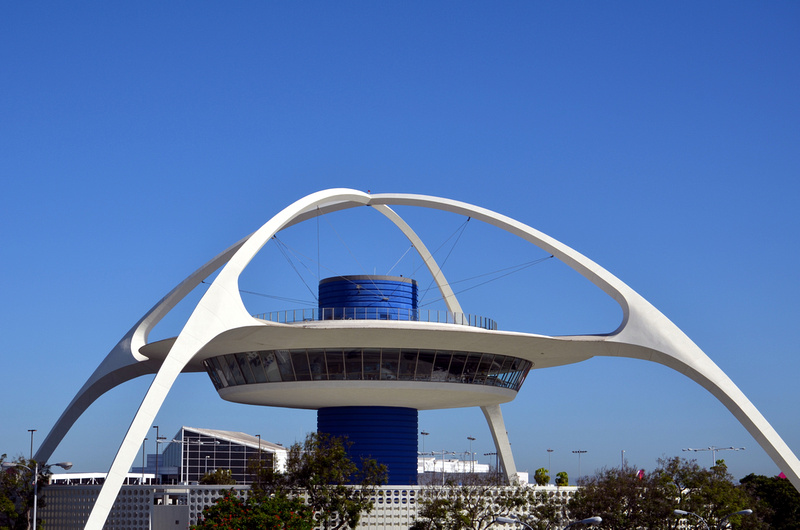 The Theme Building is an iconic modernist structure at Los Angeles International Airport (LAX). It is recognised as an example of ‘Googie’ architecture which emerged in Southern California during the late-1940s. The ‘Googie’ movement was influenced by the futurist designs of car culture, jet travel, the emerging Space Age and the Atomic Age.

Completed in 1961, the Theme Building takes the form of a flying saucer that has landed on four legs. Flying saucers were a common aesthetic form for the ‘Googie’ movement, which often tried to symbolise motion and flight.

The original design was created in 1959 by Pereira & Luckman, and visualised the terminal buildings of LAX and the parking structures connected to a large glass dome. This proved to be too ambitious, and subsequent designs by Paul R Williams were refined with the terminals constructed elsewhere. The Theme Building marks the spot intended for the dome structure.

The building comprises a restaurant suspended from the centre by two 135 ft parabolic arches. These were the first structures in the United States to use supporting steel arches for such an application. However, the homogeneity of the crossed arches is a design illusion, as they comprise four steel-reinforced concrete legs topped with hollow stucco-covered steel trusses. 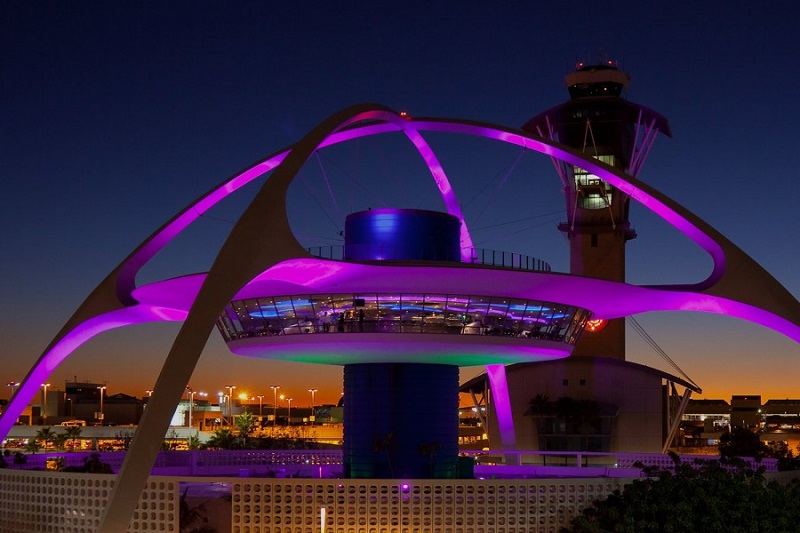 In 1997, Walt Disney Imagineering renovated the restaurant with a retro-futuristic interior and electric lighting. However, the restaurant closed in December 2013. The Observation Level is still open to the public.

In 2007, a large chunk of stucco fell from the eastern arch and smashed onto the restaurant roof. Subsequently, a 3-year repair project costing $14.3 million was undertaken, with retrofitting of a tuned mass damper to counteract seismic activity.

In 1993, the Los Angeles City Council designated the building a historic-cultural monument. It remains one of the city’s most iconic structures.

The restaurant never revolved, according to officials at LAX. It's a commin myth because of its shape.