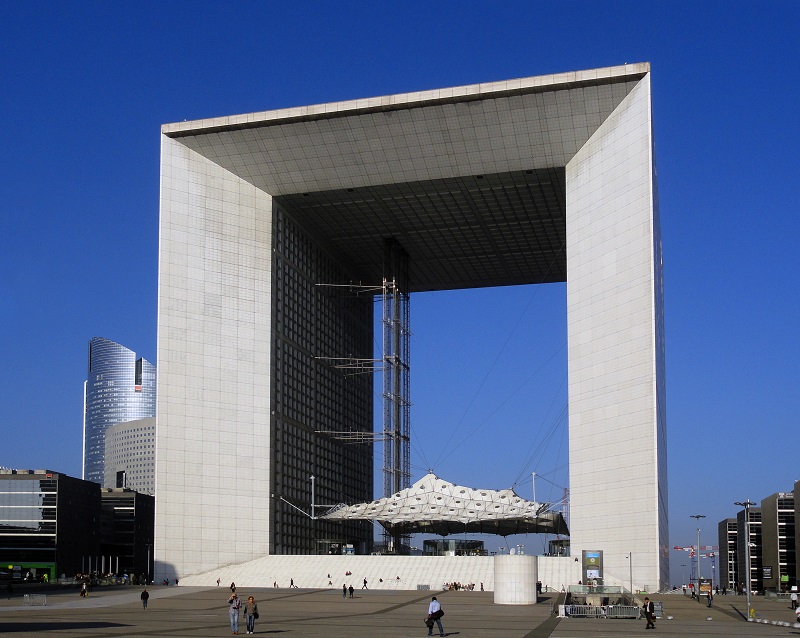 In 1982, a national design competition was launched by President Mitterrand. The winning design, by the Danish architect Johann Otto von Spreckelsen and Danish engineer Erik Reitzel, was intended to be a late-20th century version of the Arc de Triomphe; one that celebrated humanity rather than military victories. The construction of the building was completed in 1989.

The building consists of a prestressed concrete frame and twelve concrete pillars. In between the pillars and the megastructure are a series of plates to absorb vibration. The frame is covered with 350,000 slabs of Carrara marble and 2,800 opaque glass panels.

Its form is turned at a precise angle of 6.33° about the vertical axis. This was done for technical reasons, in that transport stations and a motorway are directly beneath the Arche. In addition, the turn emphasises the depth of the monument.

Government offices are contained inside the two sides of the building, while the roof section was originally a Computing Museum and exhibition centre. However, In 2010, the museum was closed, along with public access to the roof’s viewing deck. A reopening is planned for May 2017.

Retrieved from "https://www.designingbuildings.co.uk/wiki/La_Grande_Arche"
Create an article