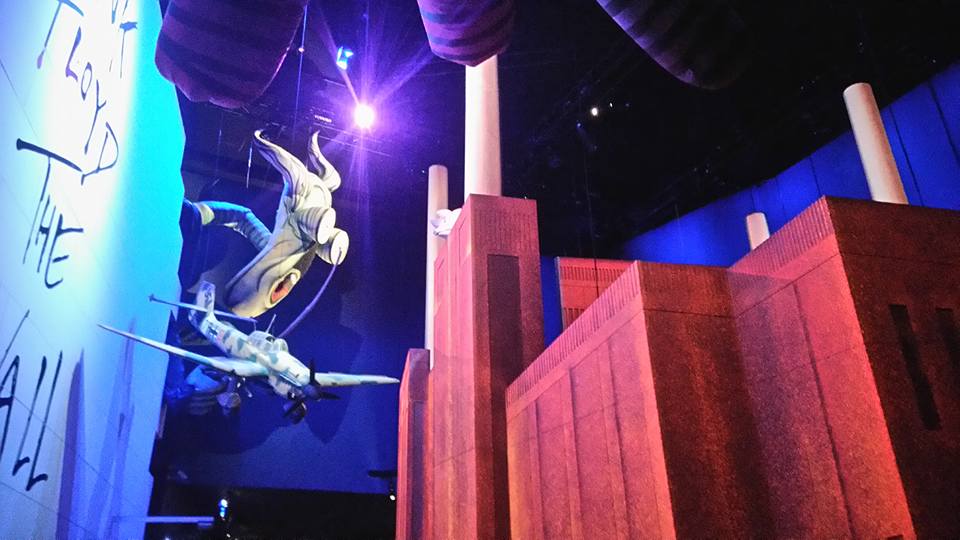 Few musical artists have left such an impressive legacy on the design of concert tours as Pink Floyd. Three of the band’s founding members met while studying architecture at Regent Street Polytechnic, making it perhaps inevitable that they would seek to push the envelope in terms of their stage designs.

A high-profile exhibition at London’s Victoria & Albert Museum – ‘Pink Floyd: Their Mortal Remains’ – presens an exhaustive exploration of the band’s career and is packed with fascinating artifacts.

Curated by the team behind the V&A’s enormously successful ‘David Bowie Is’ exhibition, die-hards and casual fans alike will thoroughly enjoy the range of props, visual imagery, and other curiosities, such as stage designer Mark Fisher’s original drawings for ‘The Wall’ tour and technical plans for the circular screen that would become a staple of their live shows. 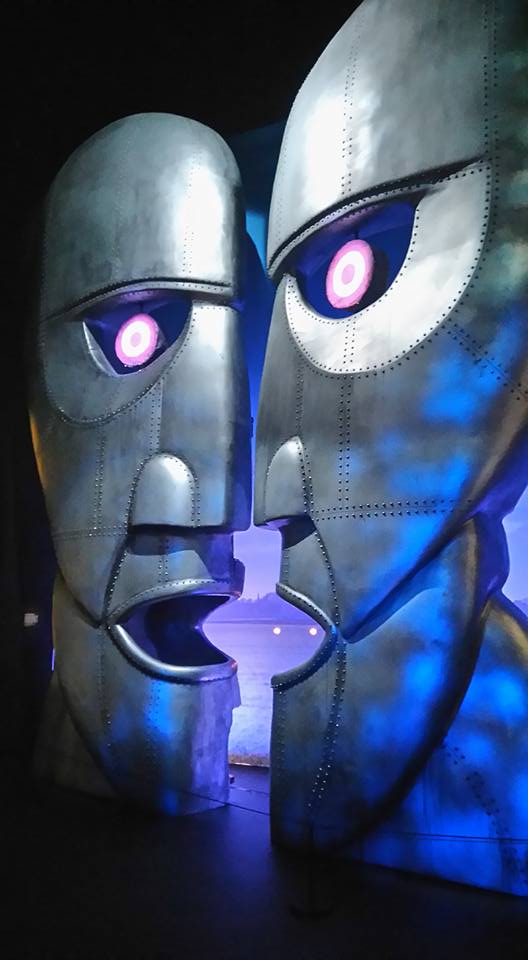 The exhibition runs at the V&A until 1 October 2017. To celebrate the exhbition, Designing Buildings Wiki have taken a look back at some of the most elaborate and inventive concert tour designs. 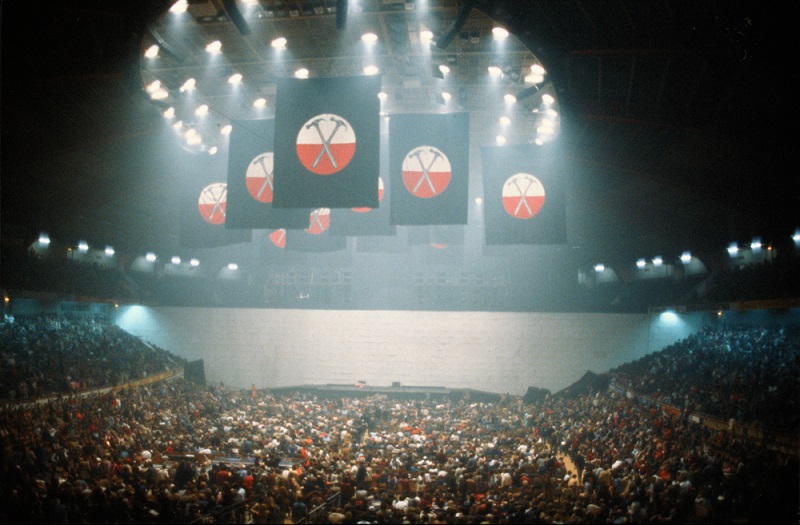 Pink Floyd's landmark tour of 'The Wall' was the first major design for a rock show by the young architecture student Mark Fisher.

During the show's first half, 420 cardboard bricks were built up to create a wall measuring 31 ft high and 160 ft wide between the audience and the band. The process of building the wall involved stabilising masts to prevent it from falling over and platforms that were raised up and down by Fisher from a bank of switches.

The second half of the show featured Gerald Scarfe's animations projected onto the wall, before the it was spectacularly brought down during the finale.

The show also included Pink Floyd's iconic puppets, an inflatable flying pig and large-scale model plane sent on a zip wire from the arena roof to the stage. 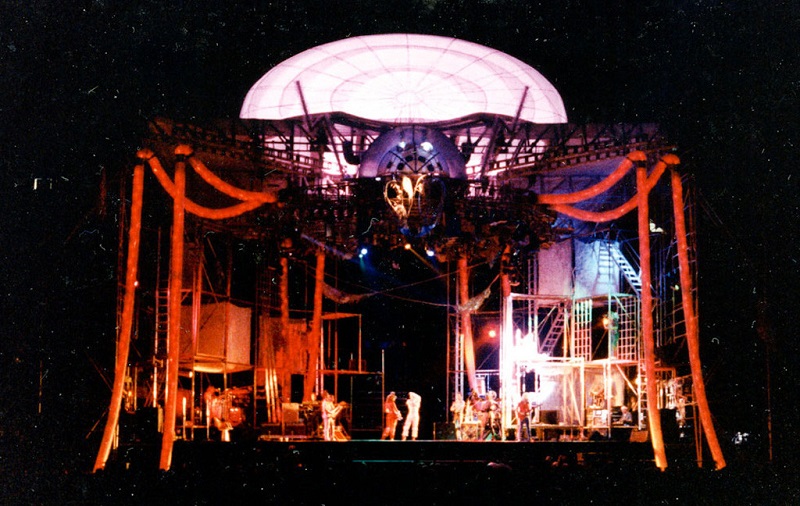 David Bowie's 1987 Glass Spider tour was the most elaborate of his career and, at the time, was described as 'the largest touring set ever'. Designed by Mark Ravitz, the structure was formed by three-storey high mobile scaffolding, 19.5 m (64 ft) wide. The set gave the apperance of a giant spider spun from fibreglass and metal, with giant vacuum tube legs that were illuminated from inside with colour-changing lights. 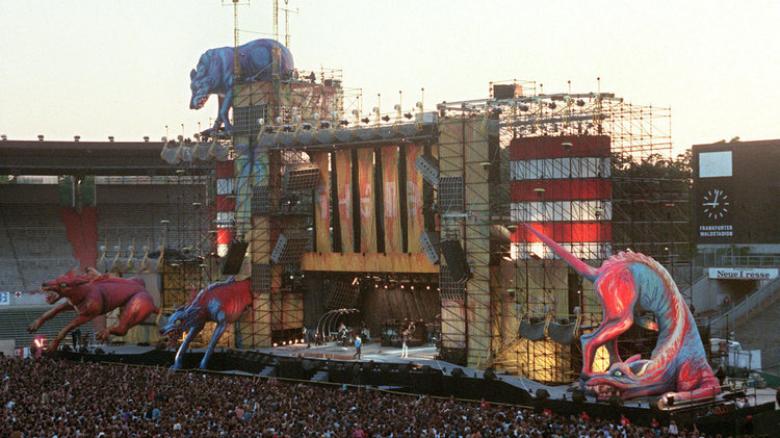 Mark Fisher designed two stages for The Rolling Stones' US and European Steel Wheels/Urban Jungle tour. At the time, it was the largest touring stage ever built, at 236 ft wide and 82 ft high, and cost of $40 million. The design was an 'apocalyptic vision' of urban decay and fluorescent jungle. 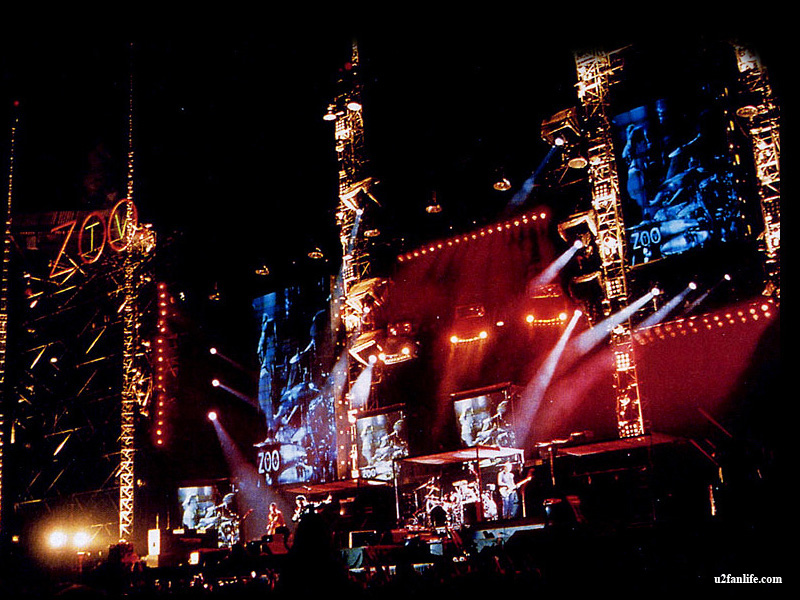 The concept was for a multi-media 'sensory overload', with video-walls, 36 video monitors, and numerous television cameras built around several huge scaffold towers. To add to the spectacle, the show included several decoratively painted Trabant cars fitted with mirrorballs and spotlights, suspended over the centre of the stage.

The design also pioneered the use of the B-stage which extended out on a runway into the middle of the audience. In 2002, Q magazine said it was 'still the most spectacular rock tour staged by any band.' 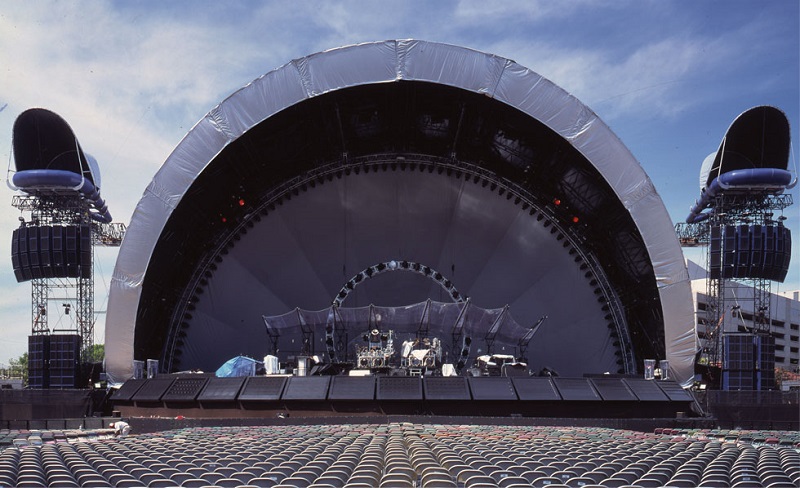 The design included the trademark circular screen, a crashing fighter plane, and an enormous mirrorball which opened up into a double-ended flower; as well as a two inflatable pigs that disembarked from 'kennels' high above the speaker rigs on each side of the stage. 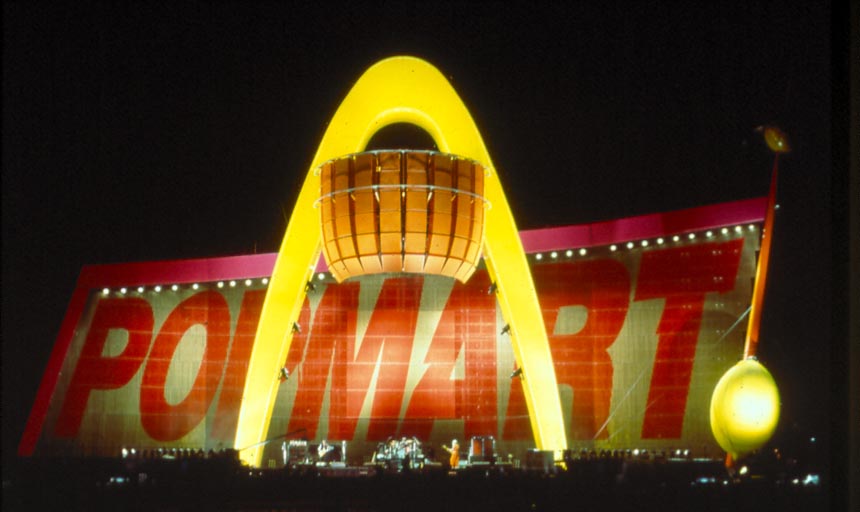 Fisher, together with Willie Williams, originally created the LED screen on a flexible fabric sheet, however, it was later decided that the it should hang in its own frame. The screen had 150,000 pixels, each of which contained 8 separate LEDs of different colours. 4,500 separate aluminium tubes were used to mount the pixels, which were capable of being broken down into 187 foldable panels, spread across 22 columns. At the front-centre of the screen was a 30 m (100 ft) tall golden parabolic arch with a suspended orange speaker rig.

This lavish tour design featured the tallest cocktail stick-and-stuffed-olive in the world (made out of aluminium and glass fibre), as well as a 12 m-high revolving mirrorball lemon which, at the encore of the show, would travel down the runway and open to reveal the band inside. 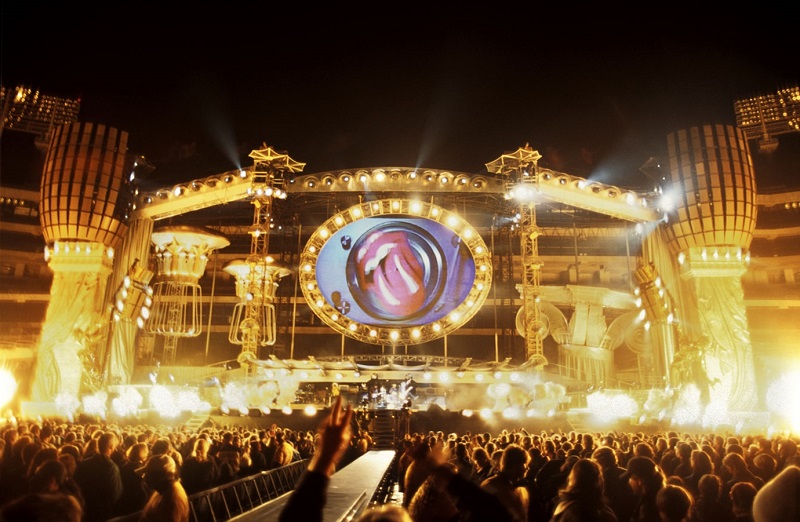 Designed as an eclectic collection of the seven deadly sins, Mark Fisher investigated a range of sources for the design, including the Baroque, ancient Egyptian architecture, and the futurist sculptor Bocchione. Adopting a Pink Floyd-inspired circular central screen, the stage also drew inspiration from U2's Popmart, with curved speaker rigs positioned on either side of the stage.

The stage design also included a 46 m (150 ft)-long telescoping cantilever bridge that extended out from the main stage to a B-stage in the centre of the audience.

Mark Fisher's final stage design for The Rolling Stones drew inspiration from the sweeping expressionist balconies of 19th-century opera houses, on which audience members were able to stand and look down on the stage.

The structure itself was 85 ft-tall and 200 ft-wide, with a high-resolution LED video screen centred between the balconies. Two lines of masts and trusses acted as support for a series of cantilever brackets providing a bearing for the sweeping balconies and lifting points for the fascia paneling. 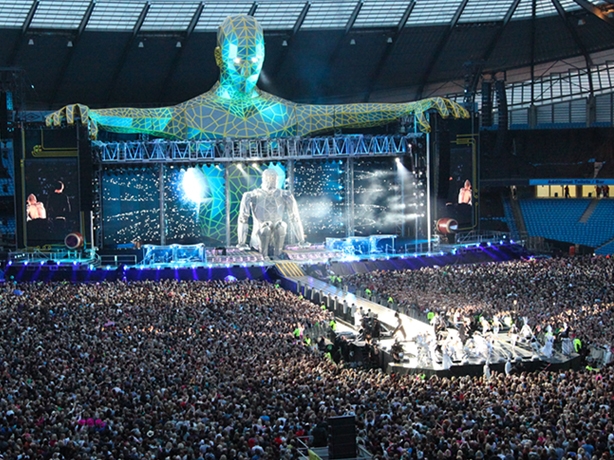 Take That's reunion tour stage was framed by the giant figure of 'Om', formed by a 28 m-high tower supporting the head and two side towers for the hands, PA and video screens. Scaffold towers curved around the back of the stage to carry the elbows of the figure, along with rear video walls and a convex supporting bridge.

Central to the show was the 20 m-high robotic man who was 'brought to life' using hydraulics. 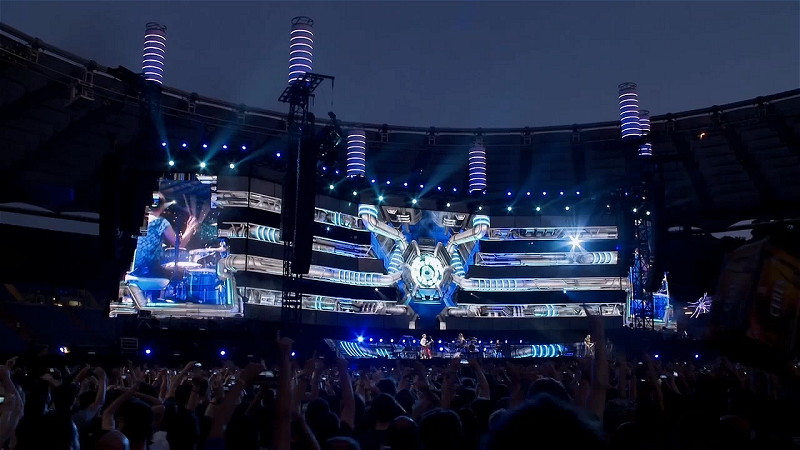 The open plan performance area was flanked at either side by two 14 m x 5 m LED video screens each 20 tonnes in weight. A further 12 tonnes of PA equipment was hung from two large central towers each side of the stage and two single PA towers at either end of the back wall. 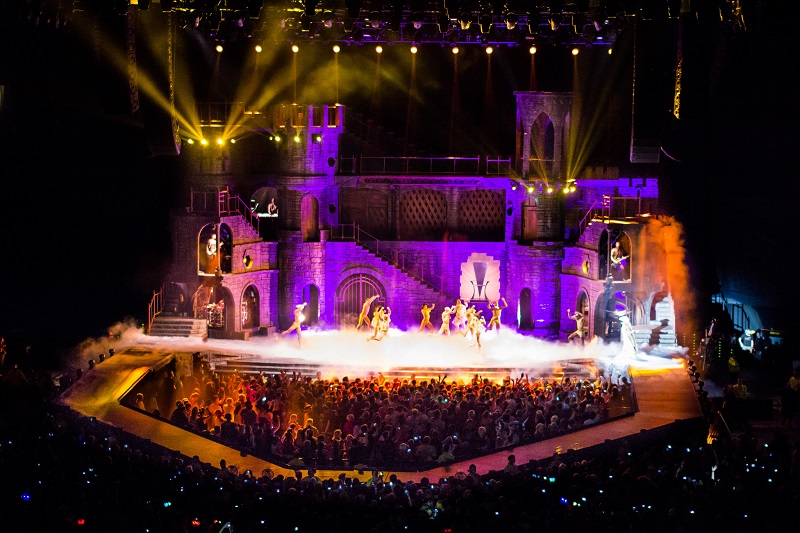 This concert stage was designed basesd on sketches made by Lady Gaga, focusing on a large Gothic castle reaching four storeys in height. Breaking new ground in terms of assembly, the whole stage structure - comprising columns, beams and nodes - was capable of being erected in less than 6 hours. 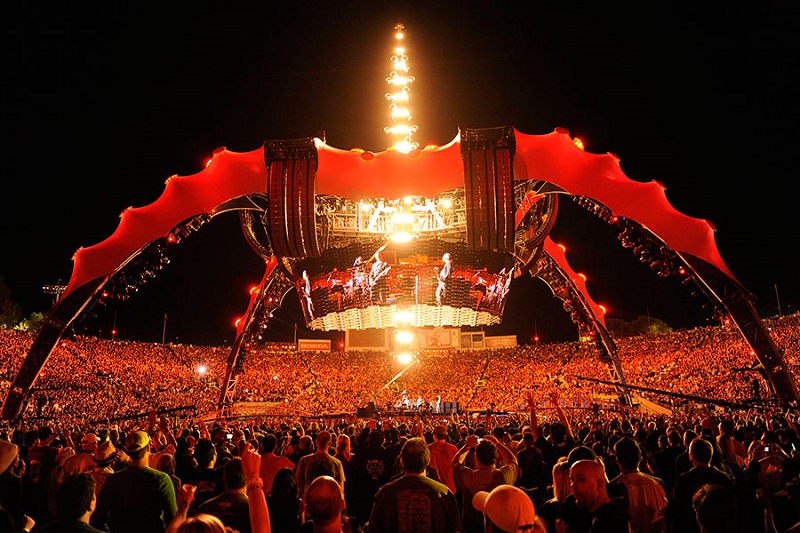 Mark Fisher's final stage design for U2 was widely acknowledged as the most technologically innovative and biggest of all time. Not to mention, being the most expensive, with each of the 3 structures that were built for the world tour costing between $23-31 million. In addition, the stage featured the loudest sound system ever assembled.

The concept, designed by Fisher in collaboration with Willie Williams, enabled the band to perform 'in the round' in a stadium setting. They were inspired by the iconic Theme Building at LAX Airport, to create a 220-ton steel structure nicknamed 'The Claw'.

The central pylon reached 51 m (151 ft)-tall, making it the largest stage ever toured, while a huge LED video wall made of elongated hexagonal segments mounted on a multiple pantograph system was extended and retracted during the show.

The design increased the capacity of venues by up to 25%, leading to attendance records at more than 60 stadiums, and contributed to the tour becoming the highest grossing of all time, with more than 7.2 million tickets sold.

Retrieved from "https://www.designingbuildings.co.uk/wiki/Architecture_of_concert_stage_designs"
Create an article