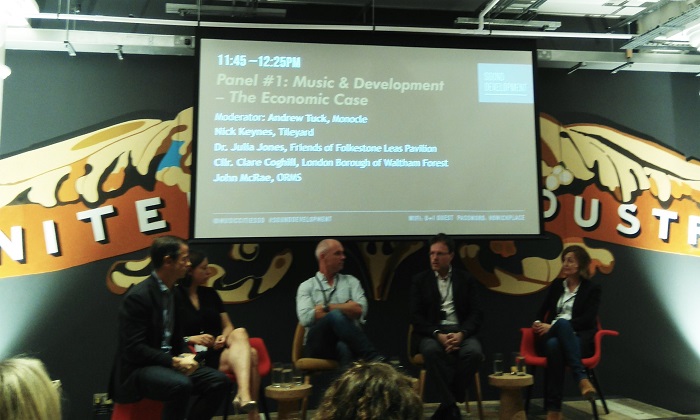 On 6 September 2016, Designing Buildings Wiki attended the first ever Sound Development conference, presented by U+I Think and Sound Diplomacy. The conference brought together the property development sector with the music and creative industries, to explore stronger and better strategies to develop and champion cultural spaces and places.

At the heart of every great town or city is a great night time economy (NTE). Indeed, the NTE is worth £66 billion to the UK economy, and provides jobs for more than 1.3 million people. However, in recent years the UK has seen a drastic decline in its pubs and cultural venues, particularly live music venues. In London alone, 35% of live music venues closed between 2007 and 2015.

The issue was provided additional pertinence at the event by the news that the legendary London nightclub Fabric was to close permanently after having its licence revoked by Islington Council.

A panel discussion brought together people, each of whom was involved in ongoing cultural projects, to discuss the economic case for music and development.

Councillor Clare Coghill spoke about her borough, Waltham Forest, and the number of pubs that have been lost over the last few years. She said that although they may look small and inconsequential, pubs are “fundamental as a sense of place”. She claimed that though the artistic and creative community of Waltham Forest was starting to thrive, it was vital that they have the right venues as focal points.

Nick Keynes, partner in Tileyard Studios, explained how he and his team transformed formerly-vacant premises near King’s Cross into a thriving creative hub, providing bespoke facilities and spaces for artists to rent.

John McRae, an architect and director of ORMS practice, explained his involvement in masterminding the mixed-use redevelopment scheme at St. Giles’ Circus, which has provoked much controversy because of its impact on the iconic Denmark Street, or ‘Tin Pan Alley’. He explained that the area has undergone significant change every 50-60 years, but that they were trying to keep the instrument shops in situ while work progressed, and were creating a new grassroots music venue below ground while trying to preserve the original buildings.

Dr. Julia Jones, managing director of Found in Music, spoke about her involvement in the Friends of Folkestone Leas Pavilion, a group campaigning for the conservation of the Leas Pavilion, which she described as an “important example of a community hub”, having been opened as a tea room in 1902 but repurposed many times since then, as a theatre and a nightclub.

Following the panel discussion, Paul Callaghan, chairman of the Leighton Group, gave a presentation on his role in establishing the Sunderland Music, Arts and Culture Trust in 2013. This group is actively pursuing the development of a cultural quarter in the city centre, with the aim of securing the title of European City of Culture for 2021. He explained how the Empire Theatre – known as the ‘West End of the north’ – is a very popular destination, but surrounded by derelict and unused buildings, and a police station styled on the kind of ‘intimidation architecture’ typically found in Moscow. He explained how, with adequate funding, these buildings will be transformed into a new auditorium for music, dance and performance art, as well as new restaurants and creative studio facilities.

The second presentation was given by Andrew Russell and Paul Broadhurst, part of the planning team at the Greater London Authority (GLA). They lamented the loss of so many important nightclubs and music venues in London over the last few years and described the current challenge of allowing developers to deliver much-needed housing while not squeezing out music and cultural hubs.

They gave an overview of some recent recommendations that look set to be taken forward with the new mayor Sadiq Khan, including:

Ending on a more positive note, they claimed that there could be as many as 18 new music venues opening in London over the next 5-7 years.

Retrieved from "https://www.designingbuildings.co.uk/wiki/Property_development_and_music"
Create an article