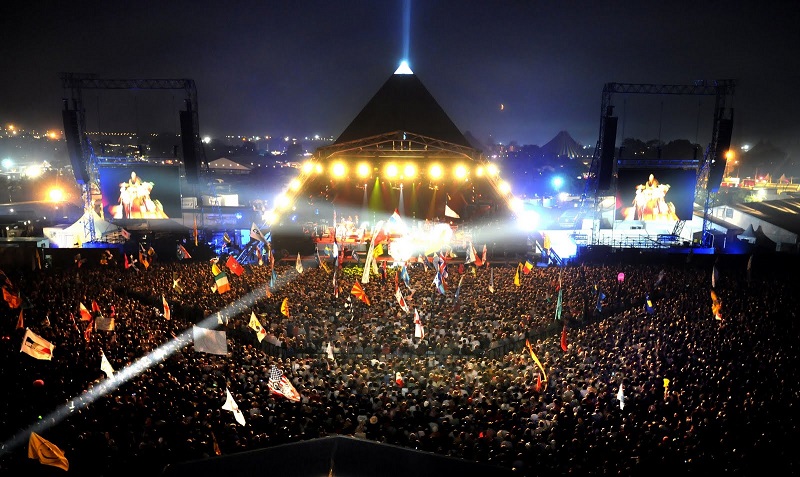 The Pyramid Stage is the main stage at the Glastonbury Festival, a festival of contemporary performing arts which takes place annually on the last weekend of June near Pilton, in Somerset. It is widely considered the most iconic festival stage in the world. It was designed and built for the second year of the festival in 1971, on a blind spring close to the Glastonbury Abbey and Stonehenge ley line.

Some of the world’s most famous and successful artists have performed on the Pyramid Stage, including David Bowie, U2, Bruce Springsteen, Radiohead, Roger Waters, Paul McCartney, The Who, Stevie Wonder, Beyonce, and more.

Theatre designer Bill Harkin designed the first Pyramid Stage, having made his initial sketches after waking from a dream in which he was in an audience looking at an illuminated pyramid. Thinking it was a good idea, he developed a cardboard model for the festival organisers, who suggested it should be based on ‘the dimensions found in Stonehenge’.

Harkin consulted Keith Critchlow, a professor of architecture and an expert in sacred architecture and geometry. Critchlow referred to his new theory of proportion, with particular reference to harmonic relationships within the geometry of Glastonbury Abbey and the ‘key of the cosmos’.

Harkin developed a workable modular building block that established a plan for the Pyramid Stage on a 3x3 grid. This corresponded to a 1/100th of the base area of the Great Pyramid of Giza. 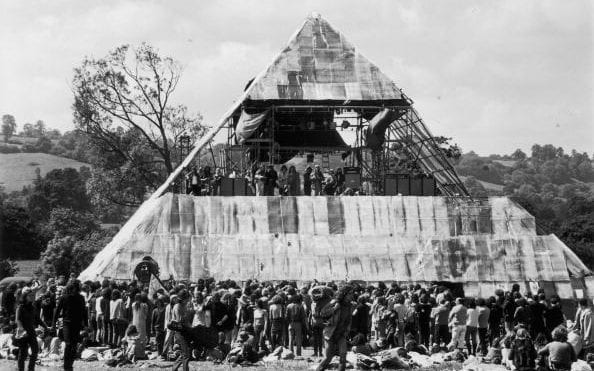 Harkin and his crew built the stage from scaffolding, expanded metal and plastic sheeting.

The sub-frame and towers were built using a modular scaffolding system called Kwikform, which had been designed for use in shipbuilding and had not been used outside a dry-dock before. The system proved so successful that it became the rock staging industry’s favoured system from then on.

With a crowd starting to accumulate in front of the stage, and 300 sheets of expanded metal lying on the ground, the audience was enlisted to start fixing the sheets to the scaffold with wire.

The unusual height of the stage was designed using Dr. John Dee’s ‘Monad’ to determine the most powerful ‘spiritual’ point. This also removed the need for a security barrier across the front, as the audience had to move back to get a good view of the artists.

In 1981, a decision was made to build a permanent structure on the site; one that could be used during the winter as a cowshed and animal foodstore (festival founder Michael Eavis’ farm remained operational year-round). The stage structure was built using old telegraph poles and surplus box section iron sheets provided by the Ministry of Defence.

However, shortly before the 1994 festival, the stage burned to the ground, and a temporary replacement was hastily erected. 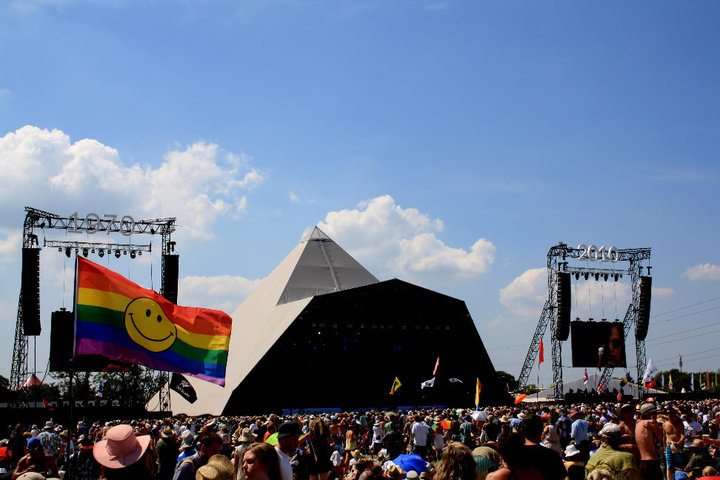 A new Pyramid Stage was built for the 2000 festival, reflecting its soaring popularity. Designed by Bill Burroughs, based on the Great Pyramid of Giza, the new stage is four times the size of the original. The steel structure is 30 m tall, uses 4 km of steel tubing, and weighs more than 40 tonnes. All the materials and processes used were audited by Greenpeace.

The stage is decorated slightly differently each year. In 2015, it was fitted with a large pocket watch with a pair of eagle wings and a laser projecting into the sky from the pyramid's peak.

ALL 3 PYRAMID STAGES WERE DESIGNED BY BILL HARKIN.