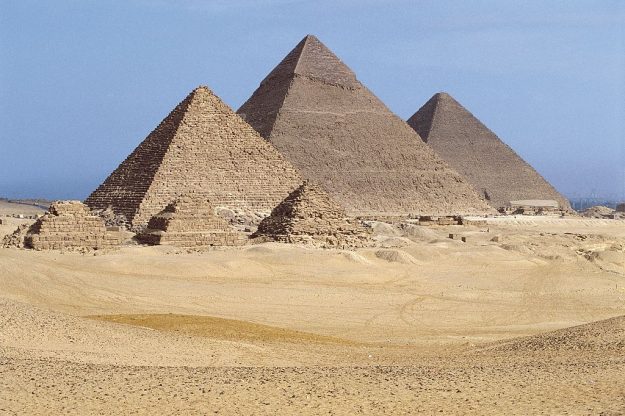 The Great Pyramid of Giza is the oldest and largest of the pyramids located on the west bank of the Nile River near Giza in northern Egypt. It is the oldest of the Seven Wonders of the Ancient World, and the only one that remains intact.

The pyramids were intended as funerary edifices for kings and were built over a period of 2,700 years. Characteristic of ‘true pyramid’ design, the monumental structure comprises a rectangular base and four sloping triangular sides which meet at the apex.

The Great Pyramid is today perhaps the most recognisable structure in the world and is a major tourist attraction, also being listed as part of a UNESCO World Heritage Site. 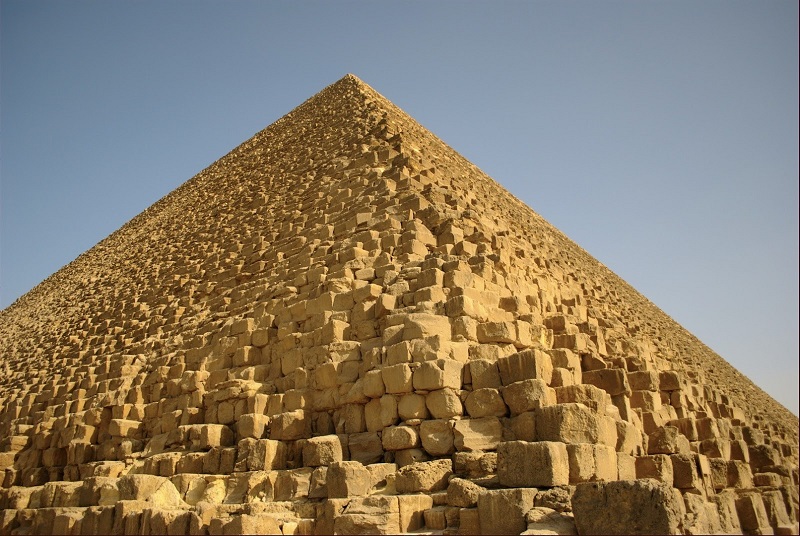 In terms of design and planning, some theories suggest that parts of the plan were laid out on the ground at a 1:1 scale. This might account for the accuracy of the workmanship, such that the four sides of the base have an average error of only 58 mm in length. The sides of the pyramid rise at the angle of 51°52′, accurately oriented to the compass’ four cardinal points.

The entrance is around 18 m (59 ft) above the ground on the north side. The Queen’s Chamber and the King’s Chamber are contained inside, connected via a corridor and a slanting gallery 46 m (151 ft) long. The King’s Chamber is shielded from the thrust exerted by the masses of masonry piled on top of it, by five compartments separated by massive horizontal slabs of granite, weighing 25-80 tonnes.

From this chamber two narrow shafts run to the pyramid’s exterior. It is not known whether these were included in the design for religious purposes or for the more practical reason of providing ventilation.

The exact method used to construct the 5.75-million-ton Great Pyramid remains something of a mystery despite a multitude of theories, some of which are more believable than others.

Most hypotheses are based on the idea that the huge stones were moved from a quarry, and then either dragged, lifted or rolled into place. The most widely accepted theory is that a ramp-like embankment of brick, earth and sand was increased along with the pyramid. Using this embankment, the Egyptians would have hauled the stone blocks using sledges, rollers and levers.

There is also disagreement about the size and nature of the workforce required. The Ancient Greeks thought that slave labour was used, with the historian Herodotus theorising that it took 20 years and 100,000 slaves to build. However, Egyptologists in the 20th century discovered archaeological remains of workers’ camps, which gave rise to the belief that a more limited workforce of as few as 20,000 could have been sufficient, with the workers being skilled rather than slaves.

One study, led by Mark Lehner, estimated that the construction required an average workforce of just over 14,500 people, with a peak of around 40,000, and a build time of between 10 and 14 years.

The core of the pyramid was formed from 2.3 million limestone blocks. The outer casing was made using white Tura limestone, crafted to form a smooth surface with intricate joints unrivalled by any other Egyptian masonry. However, this casing was gradually plundered during ancient and medieval times, although some of the stones can still be seen around the base today.

In November 2018, a team of archaeologists made a chance discovery in an ancient quarry which was heralded as shedding new light on how the pyramid was constructed.

While researching ancient inscriptions, the team discovered a ramp with stairways and a series of what they believe to be postholes. Being much steeper than was previously supposed possible, the existence of the ramp raises the possibility that builders would have hauled the huge blocks of stone from both directions using a pulley system rather than simply dragging the blocks behind them.

The team believe that this means the construction work could have been completed much more quickly than was previously believed.

The Documented Ancient Construction Method of The Great Pyramid
https://www.pravdareport.com/science/142069-great_pyramid/