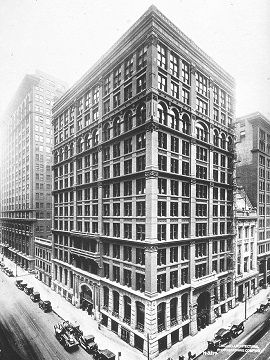 Above: The Home Insurance Building by architect William Le Baron Jenney, which some regard as the first skyscraper in the world, was built in Chicago in 1885 and was demolished in 1931.

They were among the first to promote the new technologies of steel-frame construction in commercial buildings, and developed a spatial aesthetic which co-evolved with, and then came to influence, parallel developments in European Modernism.

While the term Chicago School is widely used to describe buildings in the city during the 1880s and 1890s, it has been disputed by scholars, in particular in reaction to Carl Condit's 1952 book The Chicago School of Architecture.

Historians such as H. Allen Brooks, Winston Weisman and Daniel Bluestone have pointed out that the phrase suggests a unified set of aesthetic or conceptual precepts, when, in fact, Chicago buildings of the era displayed a wide variety of styles and techniques.

Contemporary publications used the phrase 'Commercial Style' to describe the innovative tall buildings of the era rather than proposing any sort of unified school.

Distinguishing features of the Chicago School include the use of steel-frame buildings with masonry cladding (usually terra cotta), large plate-glass windows and limited exterior ornamentation. Sometimes elements of neoclassical architecture are used in Chicago School skyscrapers.

Many Chicago School skyscrapers contain the three parts of a classical column. The first floor functions as the base, the middle stories, usually with little ornamental detail, act as the shaft of the column, and the last floor or so represent the capital, with more ornamental detail and capped with a cornice.

The 'Chicago window' originated in the school. It is a three-part window consisting of a large fixed center panel flanked by two smaller double-hung sash windows. The arrangement of windows on the facade typically creates a grid pattern, with some projecting out from the facade forming bay windows. The Chicago window combined the functions of light-gathering and natural ventilation; a single central pane was usually fixed, while the two surrounding panes were operable. These windows were often deployed in bays, known as oriel windows, that projected out over the street.

Architects associated with the Chicago School include:

Retrieved from "https://www.designingbuildings.co.uk/wiki/Chicago_school_of_architecture"
Create an article