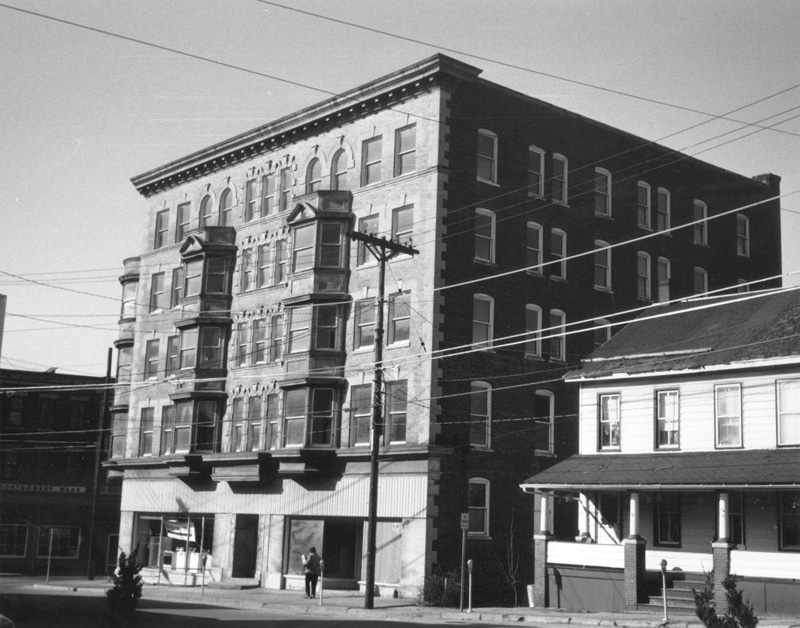 The Commercial style (1890 - 1920) reflects advances in construction technology that permitted the creation of very tall buildings, the first skyscrapers in the urban landscape. This style is sometimes referred to as the Chicago style, after the city where steel-framed, relatively unadorned, utilitarian, tall commercial buildings first appeared in great numbers in the 1890s.

Advances in commercial architectural design in Philadelphia and New York City laid the groundwork for the full development of the Commercial style in Chicago.

William Le Baron Jenney was the first architect to employ the steel frame construction in his design for the Home Insurance building completed in Chicago in 1885. Other prominent architects who worked in the development of this new building technology included the firms of Adler and Sullivan (Sullivan's embellishment of this style became its own distinctive architectural style, the Sullivanesque), Burnham and Root, and Holabird and Roche. While the style thrived in Chicago at the turn of the 20th century, examples of the Commercial style can be found in many other cities.

Prior to the development of steel frame technology, building height had been limited by the need for massive masonry support walls. The strength of the steel skeleton allowed for much taller buildings without the bulk of heavy masonry walls. The invention of the lift also facilitated the design of tall buildings by making upper floors more easily accessible. Commercial style buildings reflecting this first wave of skyscraper construction are usually between six and twenty storeys in height.

The distinguishing characteristics of this style are a steel skeleton construction, expressed externally as a grid of intersecting piers and cross spandrels, a flat roof with modest cornice, and large bands of windows.

Windows often featured a projecting bay which extended from the ground floor to the top of building. Another common window type used for Commercial style buildings was the 'Chicago window', comprised of a large fixed central pane, flanked by two narrow casements for ventilation. The ground floor of Commercial style buildings usually contained large display windows for storefronts.

Some examples of this style employ decorative elements of other popular styles of the era, such as Romanesque or Gothic Revival ornament. Sullivan's uniquely curvilinear Art Nouveau inspired ornamental panels led to its distinction as a separate architectural style. Some buildings of Commercial style are very simple in design with no notable ornamentation or reference to past architectural styles. These bare bones commercial buildings were the precursors of even taller and more simplistic modern skyscraper design.

While the purest description of Commercial style buildings best fits early skyscrapers, many much shorter buildings are sometimes described as Commercial style. These 1-4 story brick buildings date from the same era, were designed for commercial use, have large pane windows on the ground floor and flat roofs, often with decorative parapets. Early car dealerships and repair shops often take this form with large windows or garage door bays on the ground floor. This sub-type of the style is a more vernacular version than the true high style Commercial style skyscrapers.

Retrieved from "https://www.designingbuildings.co.uk/wiki/Commercial_style"
Create an article