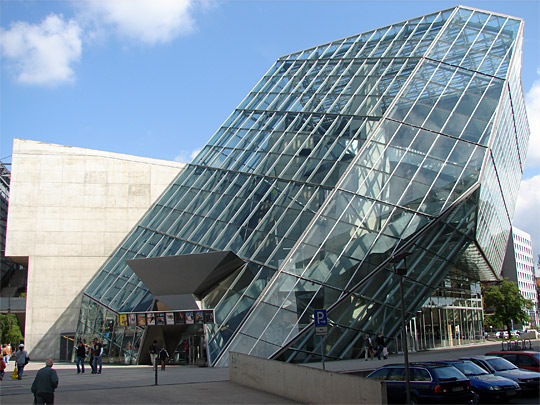 Deconstructivism is a Postmodern architectural style characterised by the idea of fragmentation and the manipulation of a structure’s surface. Buildings adopting the style are often formed of components that have been disassembled and reassembled in a new and unorthodox way, giving the impression of a chaotic design devoid of precise logic.

It attempts to move away from the conventions of modernism that can be viewed as ‘constricting rules’, such as the notions that ‘form follows function’, ‘purity of form’, and ‘truth to materials’.

Other defining stylistic features include:

The rise in prominence of computer-aided design (CAD) in contemporary architecture was a key factor in the development of deconstructivism, as three-dimensional modeling enabled the intricate design of complicated and unorthodox shapes and spaces.

Despite seeking to distance himself from the label, one of the most prominent architects associated with the style is Frank Gehry, whose Santa Monica residence – the building for which he first received critical acclaim – is regarded as the prototypical deconstructivist building, as well as his later buildings the Guggenheim Museum and Walt Disney Concert Hall.

Other architects who have been identified with the style are Zaha Hadid, Peter Eisenman, Rem Koolhaas, and Daniel Libeskind.

The most notable examples of deconstructivism are:

Retrieved from "https://www.designingbuildings.co.uk/wiki/Deconstructivism"
Create an article