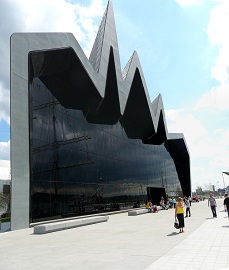 Parametricism is an architectural style based on computer technology and algorithms. The concept emerged from the digital animation techniques of the mid-1990s, but has risen in prominence in the early-21st century with the development of advanced parametric design. The parametric design approach has resulted in many of the curving, non-rectilinear buildings completed in the last couple of decades.

The term 'parametricism' was coined by Patrik Schumacher, partner at Zaha Hadid Architects, who promoted it as the natural successor to post-modernism.

‘The style finally closes the transitional period of uncertainty that was engendered by the crisis of modernism and that was marked by a series of short lived episodes including post-modernism, deconstructivism, and minimalism. Parametricism is the great new style after modernism.’

Schumacher theorised that, in becoming the dominant single style for avant-garde architectural practice, parametricism is able to articulate increasingly complex social processes and institutions. In terms of aesthetics, the style is characterised by the elegance of ordered complexity, of fluidity and seamless curvatures that are reminiscent of systems found in nature.

Schumacher identified the defining heuristics of parametricism as being both positive (dogmas) and negative (taboos):

The architectural forms of parametric design are based on specific algorithms or rules. Parametricism links elements, architecture and urbanism as a set of design criteria which forms a complete ‘system’ of values, that might include the way people move through the building, their frequency of encounter, their dwell times, and so on. These values are linked in a similar way to a spreadsheet, with one value change causing a change in all other related values.

Accordingly, the ultimate goal of parametricism is that a computer could calculate every factor imaginable and deliver a building that responds to and reflects all of them, thereby achieving architecture based on rational scientific data as opposed to intuitive artistic judgements.

A central criticism of parametricism is that it sometimes foregoes the requirement that a building appropriately responds to the context of its site, i.e. in terms of topography, local culture, economics, etc. Many of the most celebrated buildings that have been designed using parametric techniques have been accused of being capable of belonging anywhere with little-or-no attachment to the specific area.

Another criticism is that parametricism is an opaque, pseudo-intellectual facade for the formal preferences of certain architectural practices, luring clients into spending on unnecessarily expensive buildings for the few who can afford them, and with results which fail to deliver on promises, in either form or function.

Parametric design is fundamental to the emergence of building information modelling (BIM), where parametric rules create relationships between different elements of the design. So for example, a rule might be created to ensure that walls must start at floor level and reach the underside of the ceiling. Then if the floor to ceiling height is changed, the walls will automatically adjust to suit. The same algorithm might be used throughout a model so that if a particular element or rule is changed, it changes throughout the model. In effect the model is a representation of all the rules that the user has defined.

Retrieved from "https://www.designingbuildings.co.uk/wiki/Parametricism"
Create an article