The Architecture of Neoliberalism 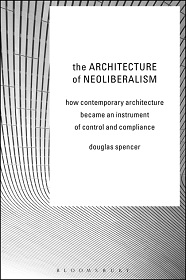 Douglas Spencer - ‘The Architecture of Neoliberalism: How contemporary architecture became an instrument of control and compliance’

When Zaha Hadid died in 2016, she was celebrated as one of the 21st century’s most influential and visionary architects. Buildings such as the Guangzhou Opera House, the London Aquatics Centre, and the Heydar Aliyev Cultural Centre demonstrated a radical and futuristic aesthetic that was very much her own.

However, her critics also made mention of the human rights controversies which dogged her later career; in particular, the building of the Qatar World Cup Stadium, for which she claimed an abdication of responsibility.

According to Douglas Spencer, such pronouncements and controversies, far from being isolated events, are very much bound up in the architecture of neoliberalism that has developed over the last couple of decades, and which he critiques in his challenging and uncompromising book.

Neoliberalism is one of those buzzwords that is often used but seldom completely understood. In short it is a form of capitalism that promotes shrinking the state and public services in favour of privatisation, and any notion of the 'common good' is surrendered to the ‘logic of the market'. It was developed as an ideology by the likes of Hayek and Friedman, and introduced in the West by Thatcher and Reagan in the 1980s.

Spencer’s book is perhaps the first to analyse neoliberalism in conjunction with its architectural expressions. He joins the intellectual dots from 20th century countercultural thinkers such as Foucault and Lefevre, to some of the 21st century’s most celebrated architectural practices. In addition to Hadid and Schumacher, the book provides incisive analysis of the likes of Rem Koolhaas, Alejandro Zaera-Polo and Greg Lynn, and deconstructs buildings such as the CCTV Headquarters in Beijing, Birmingham New Street station, and the BMW factory in Leipzig.

Overall, this is a complex and tough read, which will likely only appeal to those steeped in architectural theory and criticism. But that does not make the book any less important or timely. Indeed at this disorientating time of change, when the foundations of the neoliberal ideology appear to be buckling beneath the weight demonstrable failures, it is a powerful and instructive piece of work.

To find out more and purchase the book click here.

Retrieved from "https://www.designingbuildings.co.uk/wiki/The_Architecture_of_Neoliberalism"
Create an article