The term 'architect' has been in existence for many centuries, however the architect as its own recognised profession is a relatively modern concept. The term and what it represents has evolved through history to its current form in which architects are seen as highly qualified and educated professionals.

It is often assumed that architecture as a profession dates back to the ancient Greeks, the Egyptians or the Romans, and although the origins of the word date back to these times, it wasn't until much later that the Architect became a recognised profession in its own right.

Vitruvius Pollio (born c. 80–70 BC, died after c. 15 BC), is often considered as the first recognisable 'architect', known as a great Roman writer, engineer and builder. However Vitruvius wasn't strictly an architect and did not conform to our perception of architects today.

After Vitruvius, the term architect fades into history, overshadowed by religious or political figures.

It was the discovery by Florentine scholar Poggio Bracciolini of Vitruvius of the lost great book, De Architectura ('On architecture', published as 'Ten Books on Architecture') during the early Renaissance period that influenced and inspired the architectural movement and was a significant contributor to developing the architect as a profession in its own right. The book, in part, was an attempt, to summarise the professional knowledge of the day, and to describe the graphic conventions of classical design (1).

Origins of the profession in Europe

The modern day term 'Architect' dates back to the mid 16th century, from the French architecte and Italian architetto, originating from the Greek arkhitektn, where arkhi means 'chief' and tektn 'builder'.

'Architects' first began to develop as a distinct discipline in Italy during the renaissance period. Until this time, the practice of architecture, as we understand it today, was not a recognised profession, and unlike the painter or sculptor, the designer of buildings did not have a clearly defined place within the trades. There was no standard training for those wishing to engage in architecture, there was no guild devoted specifically to the professional interests of architects, and the men who made the plans for churches and palaces were ranked alongside humble artisans (4).

Evidence of the emergence of the architectural profession as an independent discipline can be seen in 1550 when Giorgio Vasari published the first edition of his history of Italian artists 'The Lives of the Most Excellent Painters, Sculptors and Architects'. This period in history was also one of political, social and economic turmoil, with the last remnants of the Roman empire fading away, the black death devastating a third of central Europe's population, labour shortages and increase in wages. This resulted in a wealthier and more developed population with newly inherited land, where religion was being questioned and art and education was being revolutionised.

Subsequently, the French writer Philibert Delorme was influenced by the movements in Italy and by the idea of the architect as a profession. He envisaged a self-governing profession of specialists with accepted standards of training and clearly defined responsibilities and privileges. In his Premier tome de l'architecture, published in 1567, he said, patrons should employ architects instead of turning to “some master mason or master carpenter as is the custom or to some painter, some notary or some other person who is supposed to be qualified but more often than not has no better judgement than the patron himself” (5).

Phulibert defined the roles appropriate for the patron, the architect, and the workman and created guidelines for their working relationship. What made Philibert's view of the profession so much more focussed than his predecessors was that he distinguished between the architect and those who designed buildings, but were not, in his view, architects.

Arguably the first architect practicing in the way that we view the profession today was Palladio who worked almost entirely in what was the Venetian Republic in Italy. Palladio is regarded as the greatest and most prominent architect of the 16th century. His career was based almost entirely upon the Vicenzan and Venetian nobles for whom he designed palaces and country estates. His reputation was established by his successful entry in the 1549 competition to remodel the city council hall in Vicenza (the so called Basilica), by his numerous villa designs (over twenty are illustrated in his Quattro Libri, published in Venice in 1570) and by his palace projects (7).

What also makes Palladio comparable to the architect of modern times is his experimentation and use of a range of materials to suit individual clients needs. His place in history as an architect is not only based on the beauty of his work but also for the variety of his clients, the varying scale of his buildings and their harmony with the culture of the time.

Architect's practice varied enormously in the sixteenth century, but it is clear that architects such as Palladio and Alessi had a larger number of commissions than their predecessors. Neither Palladio nor Alessi was attached to a court or to great patrons, and they were not obliged to supervise construction, although they often did.

Origins of the profession in Britain

In 1534, Henry VIII declared himself head of the Church of England. At the time the church was the largest land owner in Britain, as well as having great wealth and political power. Henry dismantled or destroyed the majority of significant cathedrals and monasteries across England and claimed their wealth and land for himself and the Royal court.

The word architect first appeared in the English Oxford Dictionary in 1563. One of the first Englishmen to call himself 'architect' was John Shute, in his 1563 publication The First and Chief Groundes of Architecture. Shute's origins are unknown, but he seems to have trained as a painter and was sent to Italy in 1550 by his employer, the Duke of Northumberland (2). Shute's ideas and writings inspired and influenced others at the time and reflected the aspirations of the architectural patrons of the post Reformation era, where there were new land-owning politicians, civil servants and nouveaux-riches such as the Cecils of Burghley and Hatfield and John Thynne of Longleat.

Up until this point the state and church had designed and built its own buildings 'in-house' and no individual designers are particularly known. However with the new influx of wealthy land owners, Henry had created, there was now a very apparent need for architects to design and build new homes and landmarks to signify the wealth of these individuals.

Without established governing bodies, guilds, qualifications or legal safeguards, almost anyone could call themselves an architect, and architects had very few legal protections. The Royal Building Administration in France (formed during the reign of Charles V (1364-80)) was intended to maintain good standards within the builders and masons guilds, but although architects had to work by these standards, they did not relate specifically or solely to architects.

In the UK, The Royal Institute of British Architects (RIBA) was established in 1834. Architects subsequently campaigned for protection of the title 'architect' and the creation of an architects' registration body to regulate the profession and protect the title. In 1931, the Architects (Registration) Act created the Architects Registration Council of the United Kingdom (ARCUK).

In 1993, the Warne Report, prepared by senior civil servant John Warne, recommended that both ARCUK and protection of the title should be abolished, or failing this, that ARCUK's functions should be transferred to the RIBA. However, under pressure from architects themselves, a compromise position was reached.

The establishment of architectural governing bodies and institutes in other countries is outlined below:

With current EU regulations and various international agreements, there are now also many other 'umbrella' organisations that interlink architectural bodies.

Historically, architecture was seen as one of the arts, and there was no formal training. There were architectural workshops in Italy in the sixteenth century, but very little is known about them and they were not recognised by academics.

The governing body for builders and masons in France, the Royal Building Administration, influenced the organisation of the modern architectural office, its delegation of the tasks, busness administration, drafting, planning, site inspection, and engineering. This set the standard and curriculum for the first school of architecture, the École des Beaux Arts established by the French state.

The École des Beaux Arts later acted as a model for America, which sought to create its own identity and style by improving the practice of architecture and through better education. This influence became particularly strong towards the end of the nineteenth century when architects were recognised as specialists in their own right, with many wanting to be not just pratitioners in an independent field but as academics within that field.

America recognised that the success of École des Beaux Arts was based on a well organised curriculum, government patronage and a rational design theory. The long established French system was backed by American architects who had been rallying at this time for their own state licensing laws. A number of architectural schools began to appear and would often seek École des Beaux Arts graduates as lecturers and staff. However not all supported this system, with Loius Sulivan, who had studied at the Ecole in 1874, and Frank Lloyd Wright, who turned down Daniel Burnhams offer of four sponsored years in Paris, being the most influential detractors. They called the École des Beaux Arts' teachings artificial, superficial, and totally unsuited to American needs (9).

Parts of Europe also adopted an academic method of training, however Britain continued with its natural mode of education through the self-controlling mechanism of apprenticeship. “This was a modification of the medieval apprenticeship system. But where an apprentice exchanged his labour for instruction from a master, an articled pupil paid cash to be taught. Probably something like one-half of all entrants to the occupation were trained through pupilage by 1800, rising very quickly in the opening decades of the nineteenth century to displace other entry points into the occupation, such as through the building trades. Pupilage usually lasted five or six years, and often included attendance at a local arts academy, and perhaps foreign travel” (10).

The first major academic institutes for architecture as a profession are listed below:

According to national records in the Dictionary of National Biography, entry into the profession in the UK during the eighteenth century onwards showed a very varied pupilage and background with no single route to becoming an architect. 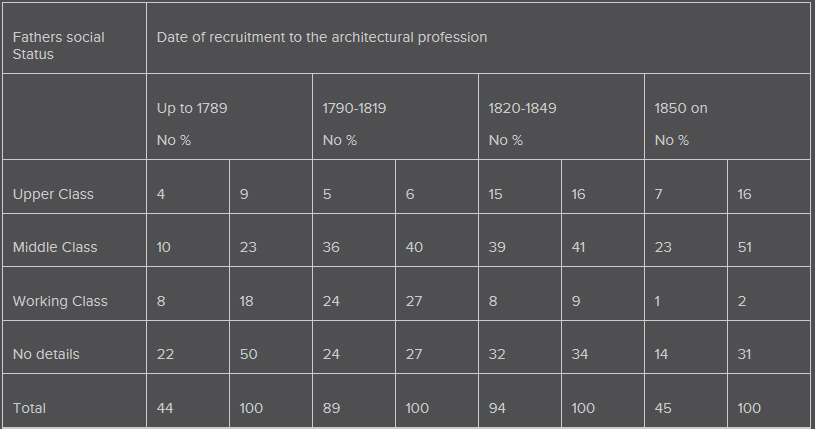 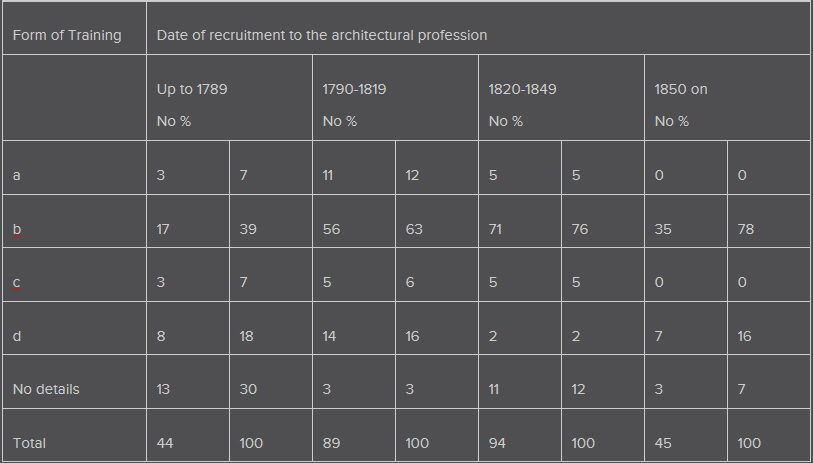 In contrast to the diverse and varied entry route to the profession in Britain and much of Europe during the 18th and 19th centuries, the entry route to becoming a practicing architect in modern times has become fairly consistent.

Most of Europe and the USA regulate architectural practice through governing bodies which as well as setting standards and codes of conduct also set the curriculum to be taught in schools of architecture.

The most common route into the architectural profession in Britain today (almost 96%) is through university study which is broken down into:

The roles within a working practice have also become far more defined. Positions in a typical UK based practice would include:

UK state regulation of the architectural profession and prescription of qualifications required for entry to the profession began in 1931 with the Architects Act of that year. This established the Architects Registration Council of the UK (ARCUK).