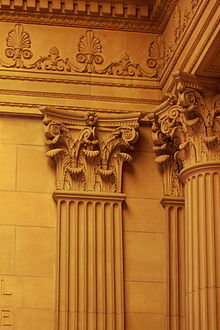 In classical architecture, a pilaster is a rectangular support that resembles a flat column. It includes the usual features of a classical column; a capital at the top, the shaft of the column itself, a base and a plinth, but it usually only projects a third of its width or less from the wall.

Pilasters are traditionally used for decorative rather than structural purposes, often as a means of breaking up an otherwise empty expanse of wall. As with columns, different classical orders can be represented, and the surface of a pilaster can be left plain or can be fluted.

The term ‘canton’ refers to a pilaster that appears at the corner intersection of two walls.

Roman architecture made common use of pilasters, as did Renaissance Europe where they became popular on both interior and exterior walls, and as a feature of the Greek Revival style.

Retrieved from "https://www.designingbuildings.co.uk/wiki/Pilaster"
Create an article