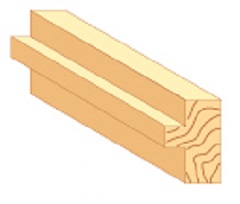 The word ‘fillet’ comes from the Latin ‘filum’, meaning ‘thread’

In classical architecture, a fillet is a narrow band with a vertical face. Fillets are often interposed as rectangular or square ribbon-like bands between curved mouldings and ornaments. They may also be found between the flutings of columns.

Types of fillet include:

In modern construction, the term ‘fillet’ can be used to refer to any thin strip of material, for example a tile fillet, in which roof tiles are set into mortar beneath a parapet to form a flashing, or a mortar fillet, used in place of a flashing at the joint between roof slates and a wall.

In engineering, the term ‘fillet’ can be used to refer to a round joint between two parts connected at an angle.

Retrieved from "https://www.designingbuildings.co.uk/wiki/Fillet"
Create an article