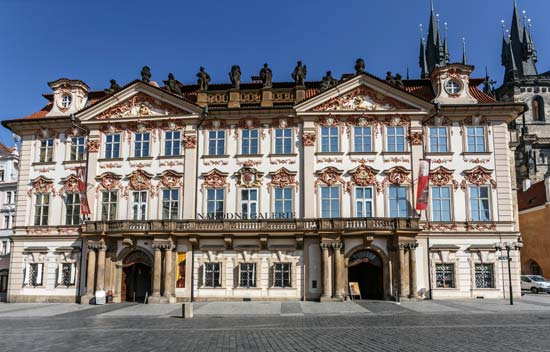 Rococo, also known as ‘late Baroque’, was an extreme, decorative development of Baroque architecture that emerged in the 18th century as a reaction against grandeur and symmetry. It was a more fluid and florid elaborate style, comprising ornate, asymmetric designs and pastel shades.

It originated in Paris, in response to the ponderous, strict Baroque architecture that had risen to prominence with buildings such as the Palace of Versailles and the official art of Louis XIV’s reign. It was soon adopted as a style across France and other countries such as Germany and Austria. However, by the end of the 18th century, Rococo had largely been replaced by the Neoclassical style.

Although there are many similarities between Rococo and Baroque architecture, the design approach tends to be more playful, light and with an exuberant use of curves. One of the principal differences between the styles is with regard to symmetry; Rococo emphasising the asymmetry of forms.

Rococo is also a more secular adaptation of Baroque, which is often more serious, with the intention of instilling awe in the faithful. Walls, ceilings and mouldings are decorated with numerous interlacings of curves and counter-curves based on the shapes of ‘C’ and ‘S’, along with shell forms and other naturalistic shapes.

The colours of Rococo are predominantly pale, such as light pastel, ivory white and gold, with frequent use of mirrors to enhance the sense of open space. French furniture from the period often displays curving forms, naturalistic shell and floral ornament, and playful use of gilt-bronze and porcelain decoration.

Some of the most notable buildings of the Rococo style are:

Retrieved from "https://www.designingbuildings.co.uk/wiki/Rococo"
Create an article