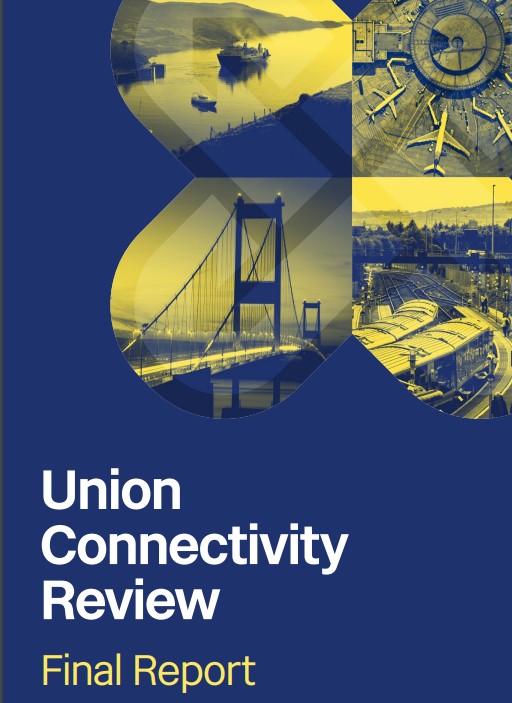 A report published in November 2021 has recommended the creation of a strategic transport network alongside targeted improvements to improve economic growth and quality of life across the four constituent nations.

The report called for the creation of UKNET – a strategic transport network for the whole UK, following its withdrawal from the EU equivalent Trans European Transport Network (TEN-T).

It identified key multi-modal transport corridors that should be part of UKNET and assessed where improvements to those routes could serve the UK’s long-term goals of levelling up and achieving net zero.

However, a feasibility study adjoining the UCR recommended that proposals for a bridge or tunnel connecting Scotland and Northern Ireland should not be taken forward in light of the expected high costs and engineering challenges, echoing ICE’s own analysis.

Improved connectivity is essential for levelling up the UK’s regions and meeting expected growth in travel demand. While the report acknowledged the uncertainty caused by COVID-19, it anticipated transport usage will broadly return to pre-pandemic levels. Investing in key transport networks was also deemed crucial for mitigating and adapting to the impact of climate change, with ensuring the resilience of infrastructure an increasingly urgent issue.

To support these overarching aims, the UCR focused on identifying where, when and what to invest in to improve capacity, reliability, journey times and sustainability on key links across the UK, rather than offering a swathe of new infrastructure proposals.

For instance, it recommended investing in the West Coast Main Line north of Crewe and reviewing options for alternative connections with HS2 to improve connectivity between Scotland and England, alongside assessing appropriate investments for the East Coast rail and road corridor.

It emphasised the need for a multimodal approach to improving the North and South Wales transport corridors, including upgrading the North Wales Main Line and enabling better connectivity with HS2.

It recommended the UK government and Northern Ireland Executive agree a plan to upgrade the railway on the Northern Ireland corridor, improve connectivity to the region’s airports and seaports and support work with the Republic of Ireland on the All Island Strategic Rail Review.

It also suggested measures to support domestic aviation where journeys are too long to be taken by road or rail, while also highlighting the need to drive the uptake of sustainable fuels and zero emission technologies in the sector.

Transport in the UK’s constituent nations is largely a devolved issue and the report acknowledged the benefits this has had for many communities, with devolved administrations able to understand local challenges and invest where it is most needed. However, the UCR argued this approach can cause vital cross-border transport schemes that are just as essential for supporting economic growth, jobs, housing and social cohesion to be overlooked.

In response, it made the case for a strategic transport network, UKNET, which would incorporate those principal multi-modal transport corridors that connect key strategic points - such as major cities and major airports and seaports and freight hubs - and deliver wider benefits across the UK.

How the UK government works with the devolved administrations to improve transportation is a complex and sensitive issue. However, research commissioned for the report showed that public demand for intra-UK travel is high and there is strong support for further investment in transport infrastructure to better connect the four nations. It also found strong stakeholder support for a strategic network, which would provide additional certainty for businesses and the supply chain.

The approach set out in the UCR thus aimed to respect devolution settlements while ensuring that planning and investment for key links is collaborative, coordinated and would maximise beneficial outcomes, particularly in already poor performing parts of the network.

Having made the case for the benefits of a pan-UK transport network, the UCR called for the Government to ensure a clear funding stream for works to strengthen it, some of which is the responsibility of the devolved administrations and would otherwise fall to be funded solely by them.

The UCR is the latest in a series of reports published in 2021, including the Integrated Rail Plan and Transport Decarbonisation Plan – which chart a course of transport planning and investment in the UK.

While collectively these set out a vision for how transportation will help tackle long-term national goals, including levelling up and net zero, there are still many outstanding issues which need addressing, including ensuring sustainable public transport funding.

This article originally appeared on The Infrastructure Blog portion of the ICE website. It was written by David McNaught, ICE Policy Manage and published on 29 November 2021.

Retrieved from "https://www.designingbuildings.co.uk/wiki/Union_Connectivity_Review_calls_for_UK-wide_strategic_transport_network"
Create an article